Several members of a community in Keningau, Sabah receiving the household essentials.

A TOTAL of 3,500 people from 662 families within the B40 group in hard-hit areas of Sook, Keningau, Sabah and the Klang Valley received supplies of household essentials worth RM165,500.

This is to help them through the next two months as they fight to survive the effects of the ongoing pandemic.

its chief executive officer Datuk Ong Eng Bin, and another RM64,000 from Kim Loong Resources Bhd earmarked specifically for Sabah where it has operations and long been a community partner.

Both OCBC Bank and Kim Loong Resources have committed to providing additional funds next year based on feedback from the ground.

According to local NGO Women of Will (WOW), which is spearheading the effort, the unprecedented Covid-19 support through the two organisations would ensure those who had been hardest hit were not left behind in their time of need.

A total of 1,900 individuals in the Klang Valley and 1,600 in Keningau are set to benefit from this exercise.

“It takes an average of about RM250 to get a household in these areas through two months.

“Since we do not see the pandemic going away very soon, we are preparing well in advance, and companies like OCBC Bank and Kim Loong Resources are true partners in time of need for making this possible, ” she said.

“Hopefully, the affected communities will be able to be self-sufficient after this period.

“That remains the vision of WOW as our end goal is always for communities to become self-sufficient.

“However, these are unprecedented times needing extraordinary efforts to ensure the survival of communities, ” Goh added.

Ong said, “When we noticed how these communities were badly hit, we decided that some forward planning would be necessary since the months could pass by very quickly and the lack of aid could have devastating effects.

“We cannot underestimate the impact of Covid-19.

“When we were informed of the devastating impact of the pandemic on these communities, we decided to participate in this programme to help the hard-hit communities in Keningau, Sabah.” 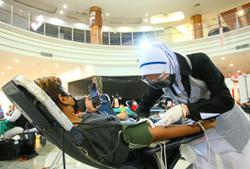