KUANTAN: Pahang government has announced Bantuan Prihatin Pahang 2021 to ensure the welfare of every strata of society in the state is taken care of in the wake of the Covid-19 pandemic.

Mentri Besar Datuk Seri Wan Rosdy Wan Ismail said a one-off contribution of RM250 per person involving 2,054 senior citizens aged 80 and above would be given.

For people with disabilities, the state government would allocate some RM8.5mil to 33,973 recipients for a one-off handout of RM250 per person.

“For 3,014 recipients of state government general aid through the Welfare Department, the state government will increase the rate from RM300 to RM350 per month, an additional allocation of RM1.8mil per year.

“To appreciate the devotion of imam, the state government has allocated a one-off handout of RM750 per person to 1,032 imam with a total allocation of RM774,000, ” Wan Rosdy said when tabling the state budget.

“To encourage 24,000 pupils of fully aided government schools who will enter Year One in 2021, RM2.4mil is allocated as a one-off RM100 grant to each pupil.

“The state government agrees to allocate RM250 as a one-off handout to each chairman, with a total allocation of RM168,750, ” he added.

Wan Rosdy said a one-off handout of RM250 would be given to each of the 1,594 hardcore poor participants of e-Kasih.

In addition, the government had also agreed to allocate RM840,000 per year as supplementary allowance for 350 Islamic teachers at the rate of RM200 per person from 2021.

“An allocation of RM1mil will be distributed to 89 tahfiz schools registered with the Pahang Islamic Religious Council, ” said the Mentri Besar.

He said 301 tok batin would receive RM250 per person while RM200 would be given to couples marrying for the first time next year.

“The state government will also allocate RM10,000 for each of the 52 community rehabilitation centres to provide training and rehabilitation to people with disabilities, ” he added. — By ONG HAN SEAN 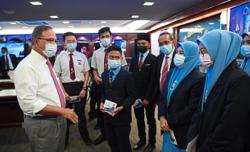