Land clearing works going on at a portion of the land in Bukit Cerakah for a residential project, which has been approved by the authorities.

WHEN trees were being felled at a parcel of land earmarked for development in Bukit Cerakah, Shah Alam, residents nearby began to worry.

“I was in the living room when I heard trees falling and it did not sound like branches falling off during a thunderstorm.

“Land clearing started in March, a few days before the movement control order (MCO) was in place. It then stopped and resumed later, ” said Perdana Heights resident S. Yuga.

Yuga, who lives right behind the said parcel of land, is concerned over some aspects of the land clearing.

“I am not sure if the developer is aware there is a river behind my house which leads to a lake, like a water catchment area, ” she said, adding that rainwater flows from the river into the lake, preventing flooding in the neighbourhood.

With land clearing works going on, soil and dirt end up in the river and residents worry it may obstruct the flow of rainwater into the lake.

Apart from this, they are also concerned about the wildlife in the Bukit Cerakah forest reserve.

“I see tapirs in the neighbourhood. The animal is an endangered species and have nowhere to go, ” she said.

There are also wild boars and other wildlife which residents see occasionally around the area.

Yuga said residents were unaware of the type of development taking place there as no signboards were put up by the developer.

Pertubuhan Perlindungan Khazanah Alam Malaysia (Peka) Selangor chairman Damien Thanam said approval for land clearing and development should have only been given after engaging with residents in the area.

“There are very few forests left in Selangor and they must be preserved for our next generation.

“With this development, wildlife in the area will migrate due to the presence of humans, machinery and pollution, ” he said, adding that this would force animals to move closer to housing areas, thereby creating human-wildlife conflict.

He also raised concerns that workers at the development site might catch these animals illegally either for consumption or wildlife trade.

When contacted, YCH Develop-ment Sdn Bhd project manager, who only wanted to be known as Chai, said the residents’ concerns would be addressed soon.

“We have planned a meeting with residents and will also invite relevant government departments such as Drainage and Irrigation as well as Shah Alam City Council (MBSA), ” he said.

Chai said work at the site had commenced after obtaining all necessary approvals from the various authorities. However, the MCO kicked in two days later forcing the developer to stop work.

The company, he added, obtained approval to restart work after applying to MBSA and the International Trade and Industry Ministry last month.

“Due to the MCO, we could not get our signboards done, which is why there is no signboard providing information at the site, ” he said, adding the 20.2ha development consisted of residential landed properties and there was no project name given to-date.

As for wild animals sighted in the neighbourhood, Chai urged residents to contact the Wildlife and National Parks Department (Perhilitan).

He assured residents that contractors would take proper measures to prevent soil or other debris from flowing into the river and lake throughout the construction.

“We will filter the soil and other debris before water is channelled into the river, ” he said.

In previous reports, there were claims that the area in question had been gazetted as a forest reserve.

Asked about this, Chai said the area had been degazetted many years ago.

“When we took over the land in 2011, it had already been degazetted for several years.

“The Forestry Department came to the site a few times to ensure that we did not encroach into forest reserve, ” he said, adding that the boundary was more than 400m away.

Kota Anggerik assemblyman Najwan Halimi said the developer had obtained all the necessary approvals from the state, MBSA and other relevant authorities.

“The developer must adhere to the rules set by the government and ensure that the issue of river pollution is addressed properly, ” he said when contacted.

“The ongoing land clearing is not illegal. However, the developer must monitor its contractors closely to ensure work is done properly, ” he said.

“Developers have to adhere to the rules and contractors must follow the standard operating procedure given, ” he added. 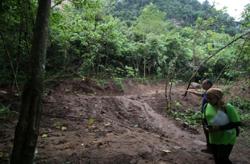