Khoo sharing his passion with fellow art lovers through an online demo.

ACROSS Penang’s art galleries, doors are closed and spaces are dark. While some artworks remain on walls – there are no crowds viewing them.

The Covid-19 pandemic has brought the world to a standstill, and the local art sector has certainly not been spared with society’s priorities shifting away from the canvas.

Since mid-March, places where art is typically experienced – be it large galleries or small independent spaces – have been out of bounds due to the nationwide movement control order (MCO).

Many art shows and related workshops were postponed or cancelled, forcing gallery operators and artists alike to embrace digitisation to reach their audience.

The Penang State Art Gallery’s (PSAG) interrupted Belang exhibition highlighting the plight of the critically endangered Malayan Tiger is moving online – with board chairman Lee Khai expecting a virtual gallery to be up by next week.

Among private establishments, The Art Gallery Penang in Pulau Tikus has done the same for its show featuring Malaysian art pioneer Khaw Sia. An online showroom means masterpieces are viewable from home.

While the transition was a steep learning curve, owner Ee Lene Tan felt it could be the way forward, saying – “Virtual visitors can get a guided tour, look around and click on paintings to get information.”

Such “exhibitions” could be the norm for some months even after the MCO, as healthcare authorities have called for continued social distancing until Covid-19 is finally overcome.

PSAG’s exhibition spaces in Dewan Sri Pinang would reopen, but Lee said ceremonies would be on a smaller scale with limits on attendance.

Though digitisation allows galleries to reach an audience stuck indoors, most may not be in the frame of mind to buy art, as Koay Soo Kau, director of Galeri Seni Mutiara in Armenian Street pointed out.

Both he and Tan observed a downturn in the local art market since the start of the year due to factors like the slow economy and emergence of Covid-19. The MCO was another blow.

Tan revealed, “Sales have dropped significantly. In times like these, art is the lowest necessity for many. Fortunately some collectors are still active.”

Koay had a philosophical view, “In life, sometimes it rains and sometimes it shines. We have survived over the decades and hope to ride out this storm eventually.”

The MCO downtime has seen the art stalwart do a lot of painting – on actual artworks and also his house. Many other artists are also making the most of it.

“I have started doing online demos to share my art with others. Though our group usually gathers on Sunday mornings to paint outdoors, for now we paint at home from photos,” he said.

He also participated in online exhibitions and was able to sell a piece recently. An architect by profession, he has something else to fall back on, but admits other artists may find it tougher.

“Some rely mainly on teaching students art for income. Others depend on the sale of artworks to support themselves. Luckily the state government has set up a grant to help artists through this tough time,” Khoo added.

Tania Ng misses the art classes she had for children every day. Choosing to look on the bright side, she does what she can – such as starting a YouTube channel and conducting free online lessons to cheer up the community.

“My teaching style is collaborative and allows input, as there is no one correct way with art. This has made the online transition easier. You have to keep lessons simple and fun so students remain engaged.

“The MCO has also given me the opportunity to experiment with my art and enjoy the process more. Without a schedule dictating my activities, I can just play around and create,” she added.

Jason Min shares those sentiments, seeing it as a time to reflect and reformat.

He has come to realise that though money and career are necessary, time with family is gold as there needs to be a balance.

He sketches almost every day to keep a visual diary, using matchstick figures to symbolise how life can flicker by quickly so one should make it meaningful.

“I have explored two new series – one on the food that we take for granted but are now difficult to access, and another paying tribute to frontliners who sacrifice their well-being in order to protect us,” Min added.

PSAG’s Lee issued a rallying call to the local art community, saying, “Let’s think how we can make art relevant in such times. Not only during this MCO but after it, as many things and perspectives in life will change because of the pandemic.

“We need to think, plan and act so that the public and politicians will not think that art is totally irrelevant.” Khoo sharing his passion with fellow art lovers through an online demo.

Ng harnessing the reach of the Internet to conduct free online classes. 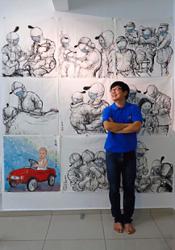 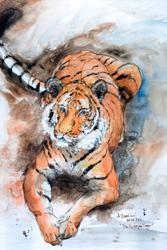