PETTY thefts, snatch thefts and more serious crimes like arson have taken place in and around houses of worship in the country.

This is especially so for those in the Klang Valley.

Mosque and temple committees have taken the matter seriously by engaging their own security guards.

However, they feel most effective would be the constant police presence.

They are calling for the police to increase patrolling around their houses of worship to safeguard the property as well as devotees.

StarMetro highlights the problems faced by some places of worship by speaking to their committee heads. 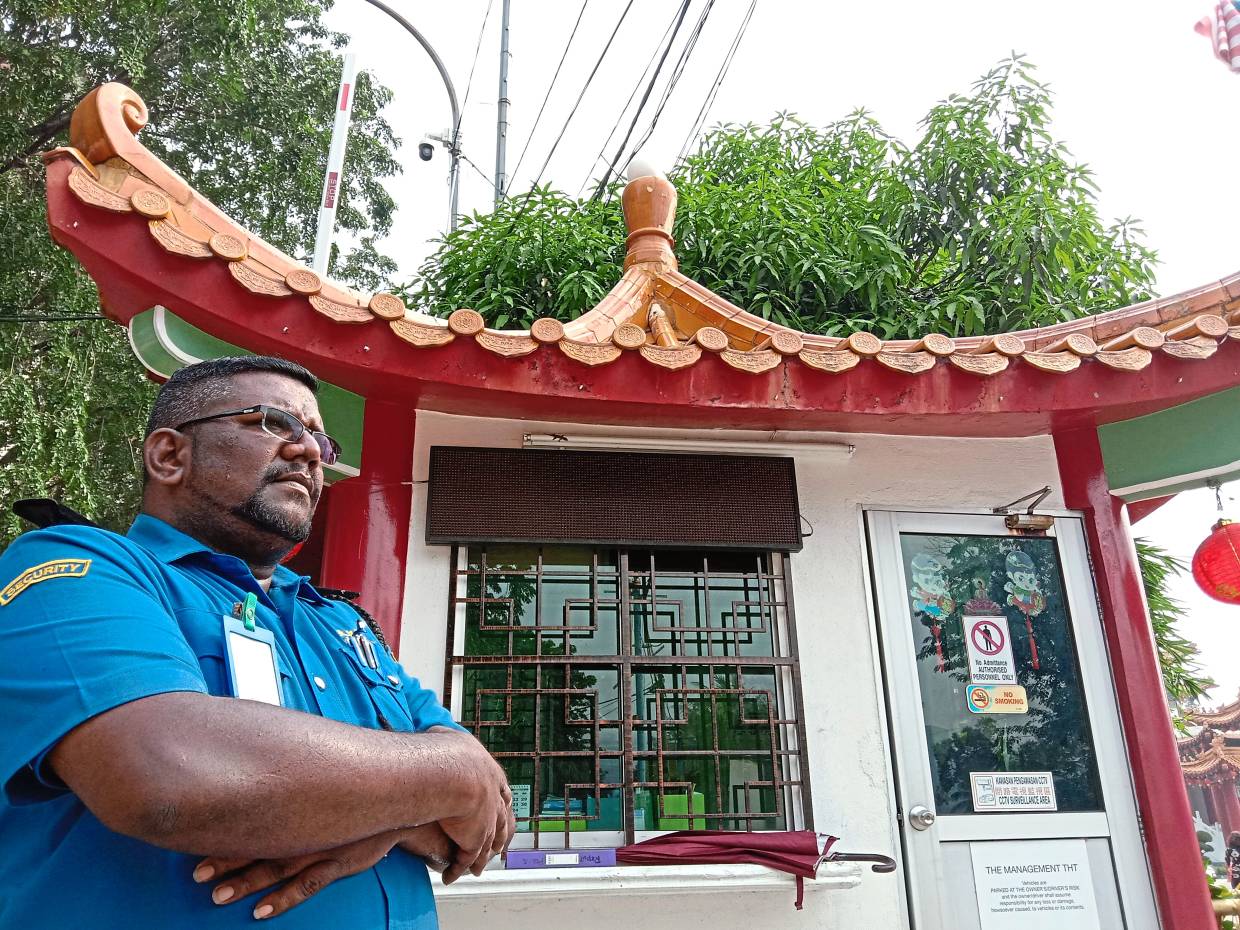 John lists shoe theft as among the crime taking place at the Thean Hou temple.

Masjid Negara public relations unit assistant information officer Ahmad Faizal Azman said the committee was hoping their request for a mobile unit or police guard post at the mosque compound would be considered.

“Many VIPs come here to attend prayers. We fear of anything untoward happening to them, ” he said.

Also, the mosque was at the heart of two major public demonstrations in the past.

Although rally organisers helped clean up the area, he said, the large number of participants who adjourned to the mosque for prayers during the two rallies caused damages to the premises.

“We had to wash the entire mosque because many wore their shoes in. Our metal gates were also broken, ” said Faizal.

This cost the management some RM1mil in repairs to the heritage building.

Where daily operations are concerned, mosque chief guard Azlan Ahmad said their team could do with backup when dealing with disturbances caused by uncooperative and mentally unstable visitors.

Azlan added that cases of footwear theft could number to about 20 a month.

Suggestions were put up for a shoe locker service but he was told that the cost was too high.

Its honorary secretary, Sethu Pathy Cumarasamy, said there were many snatch thefts outside the main gate of Batu Caves. 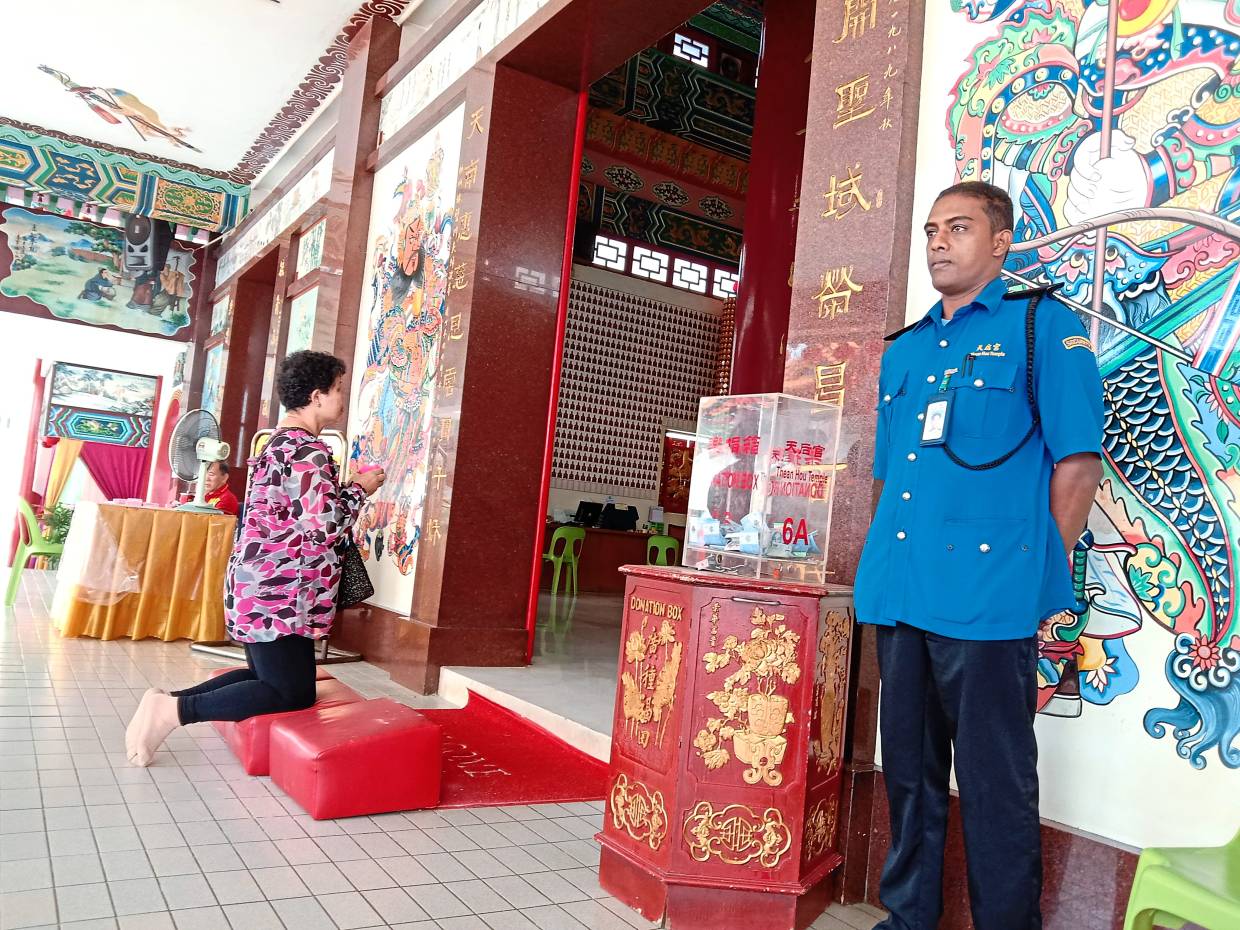 If houses of worship want to further improve security, increasing surveillance with the help of CCTVs and controlled access to donation boxes are important measures to take.

“Although the police and uniformed units have given the temple ample support during Thaipusam, it would be ideal if the police could patrol the area more frequently on normal days.

“There was a police beat built within the temple grounds some 15 years ago but is now closed.

“Since then the management has asked the police for increased patrols but we were told to refer to the tourist police.

“The final reply was that the temple area is beyond the department’s jurisdiction as it is a place of worship, ” he said.

Sethu expressed hope that the police would reconsider their decision as the temple was not only frequented by devotees but tourists as well.

During Thaipusam celebrations, the temple may see up to 1.5 million visitors a day.

Selangor and Federal Territory Hainan Association secretary-general Wong Liang Yew said there should be more patrols around the Thean Hou Temple after midnight. 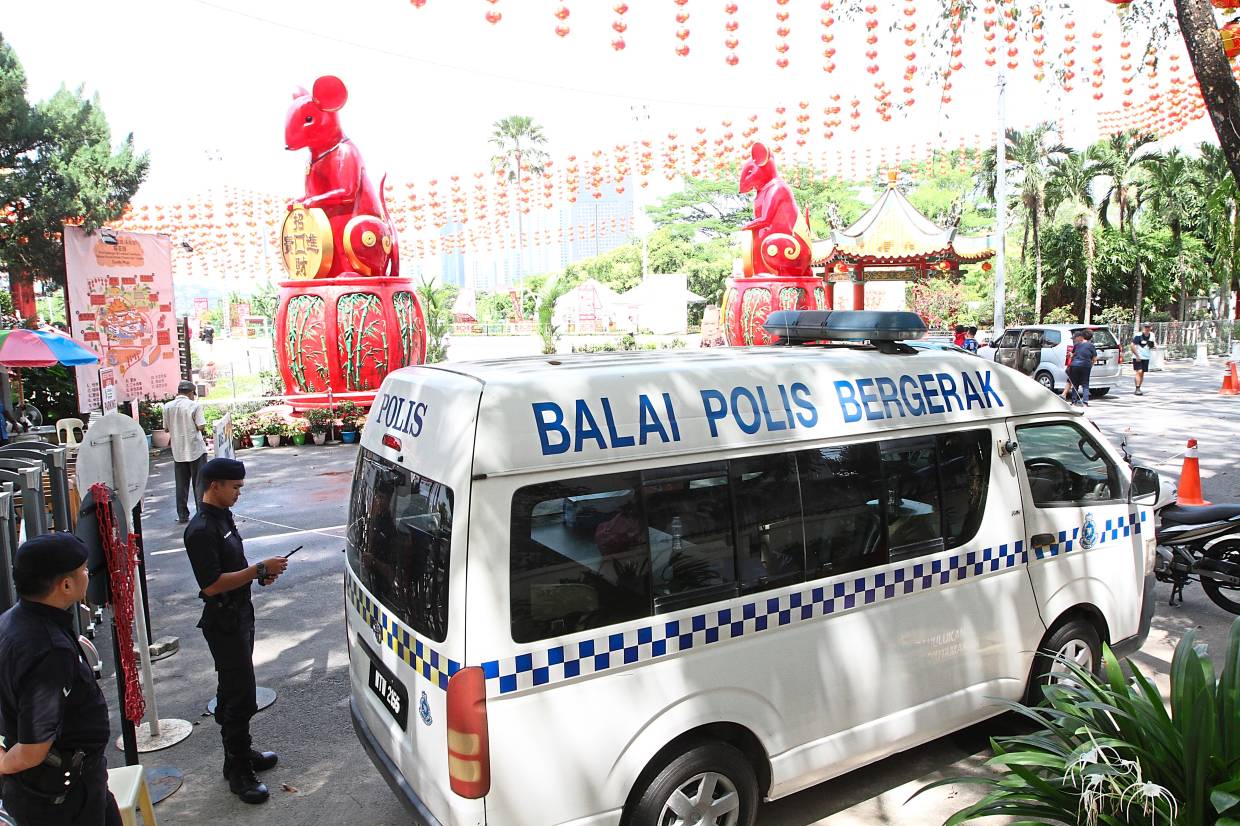 Security guard Anthony John said the visitors’ carpark has been a target for tyre rim thefts before.

Last Chinese New Year, thieves made off with the rims of a guest monk’s car.

“In 2018, we recorded seven cases of tyre rim theft, and last year there were three, ” said John, adding that three car thefts were recorded in 2017.

What made it more perplexing for the victims was that only the back or front wheels were stolen each time, never all four.

Night-shift security guards were also threatened by rowdies who parked their cars at the temple carpark to test out their stereo systems.

“They went away when the police came but they returned to confront us later. They left when we told them that it was the nearby residents who called the police, not us, ” said John.

To deal with the crime, houses of worship resorted to hiring their own security guards, but they lamented that this was an expensive affair.

Sethu said hiring Nepalese guards for each temple cost RM30,000 monthly. Before this, the committee also invested about RM100,000 to instal close-circuit television cameras (CCTV) at parts of all three temples.

The effort paid off when two pickpockets were caught and handed over to the police by their in-house security guards last year.

“It was proposed that we set up an auxiliary police team but after calculating the cost of salaries for a team of 30 (not including over time), the temple management decided it was too high for a charity organisation to bear.

“So, during the peak months, we rope in volunteers and RELA to help our Nepalese guards, ” said Sethu.

Since the temples in Batu Caves and Jalan Tun H. S. Lee were also frequented by tourists, Sethu said the management hoped its request for a grant of RM2mil from the Tourism Ministry would be approved to carry out maintenance, cleaning as well as to pay for security.

In Thean Hou Temple, two CCTVs were installed at the parking lot after the theft of the guest monk’s tyre rims last year, said Wong.

Masjid Negara has its own 24-hour security guards to rotate the areas where the donation boxes and the Heroes’ Mausoleum are located.

As the boxes may contain a sizeable amount of cash, they are locked, encased in heavy stainless casing.

This was following a directive by former Inspector-General of Police Tan Sri Khalid Abu Bakar in 2017.

The procedure was established a year after the successful nationwide implementation of the “1 Policeman 1 Mosque” programme that started in Terengganu, Pahang and certain parts of Melaka in 2013.

“Police personnel, from rank and file to inspector, must visit the places of worship of different faiths in their assigned area once a day.

“To ensure there has been two-way communication between both parties, they have to send photos, put in writing the names of committee members and be notified of any festivals or occasions happening at these places, ” said Comm Zainal.

Although hate crimes are rare, burglary and theft are common. Between 2015 and 2019,476 burglaries and 171 thefts were recorded compared to 85 cases of arson and vandalism reported in those four years.

On stationing policemen at the houses of worship, Comm Zainal said it was not feasible.

However, the district officers in charge can appoint officers ranked from assistant superintendents to constables to assist as liaison officers, he added.

“Their names, name of police station and contact numbers are to be put up on a public notice board within churches, temples and mosques so that it is visible to all. These liaison officers will be the first people to call in times of emergency, ” said Comm Zainal.

To tighten security, he said devotees must also take responsibility by being more vigilant of their surroundings. For example, regulars should take note when first timers come into their midst.

One tip he gave is to observe their movements. Additional details such as items carried, clothing and vehicle registration are important details that can help police in their investigations should the need arise.