There are concerns that developing the Gombak Selangor Quartz Ridge into a geopark may jeopardise the fragile ecosystem there. — Photos: FAIHAN GHANI and GLENN GUAN/The Star

THE Selangor government has decided to hold off on pursuing Unesco status for the Gombak Selangor Quartz Ridge (GSQR), believed to be the longest pure quartz dyke in the world.

Citing several reasons for the decision, state culture, tourism, Malay customs and heritage committee chairman Datuk Abdul Rashid Asari said a team of experts had found that the quartz ridge was not ready to be nominated for Unesco certification.

“There are very rigid and high standards when it comes to a Unesco certification, so we will concentrate on developing it as a national geopark.

“There is a team working to prepare a dossier that we can present to the National Heritage Department (JWN) as our application to gazette it as a national heritage site, ” he disclosed. Kanching Eco-Forest Park is one of the suggested sites for the Gombak-Hulu Langat Selangor Geopark.

Hulu Langat Selangor Geopark along with 22 other geosites in Selangor.

A geopark is a unified area that advances the protection and use of geological heritage in a sustainable way and promotes the economic well-being of the people who live there.

Some of the other sites being considered for a geosite include Forest Research Institute of Malaysia (FRIM), Bukit Lagong Forest Reserve and Broga Hills.

In 2017, GSQR was nominated as a Unesco Heritage Site, alongside Royal Belum State Park in Perak and FRIM in Selangor.

Based on Unesco’s Operational Guidelines for the Implementation of the World Heritage, the quartz ridge was nominated based on two criteria:

(viii) to be outstanding examples representing major stages of earth’s history, including the record of life, significant ongoing geological processes in the development of landforms, or significant geomorphic or physiographic features.

During the state assembly sitting last December, Rashid reportedly said that one of the reasons for the decision to hold off seeking Unesco certification was because the esthetic value of the quartz ridge was not “superlative” in comparison to other sites under the same criteria. The Gombak Selangor Quartz Ridge is a gigantic vertical rock slab built entirely of quartz mineral in various forms, extended for up to 14km long and 200m wide. It is believed to be the longest pure quartz dyke in the world. — Filepic

Another reason stated was that although the GSQR had data on the history of very important earth formation, admittedly scientific research, publications and reference sources as well as specific information on quartz in the GSQR were still limited.

Rashid had also explained that out-of-control recreational activities such as illegal hiking packages offered online could damage the integrity of the GSQR site.

The executive councillor added that Selangor would require two years for preliminary preparations before submitting GSQR as a Unesco heritage site.

One of a kind

The GSQR is unique not only because of its size but also its landscape, which comprises elongated craggy rocks in a green tropical forest.

Three combined characteristics make the GSQR a truly unique natural treasure: its size, the fact that it is fully exposed and its pseudo-karst morphology.

It is a gigantic vertical rock slab built entirely of quartz mineral in various forms, extended for up to 14km long and 200m wide. Leela says a more comprehensive management plan and better clarity is needed before the state goes ahead with plans to turn the sites into geoparks.

According to experts, a giant-size quartz vein that is more than 10km long is rare.

Its dramatic mid-section -– an elongated and vertical craggy rock landscape that rises out of the green tropical forest, is a distinguishing feature, deserving of its comparison to the spine of a dragon. The quartz ridge has so far narrowly avoided being an environmental casualty in several developments that would have destroyed the ridge.

In April, it was announced that the East Coast Rail Link (ECRL) project would be revived with a slightly modified route to bypass the sensitive environmental area.

Several years ago, a proposed Phase Two for East Klang Valley Expressway (EKVE) project was rejected as it would have cut through the Ulu Gombak forest reserve north of the Klang Gates Dam.

However, it is understood that an alternative alignment has been proposed so that the Kuala Lumpur Outer Ring Road (KLORR) can be completed.

While the concept of a geopark can boost the site’s prominence, stakeholders are concerned about the sustainability of the project.

Treat Every Environment Special (Trees) director Leela Panikkar questioned the need for a geopark when the quartz ridge was already gazetted as part of the Selangor State Park.

“At the moment the ridge, along with several of the other suggested geosites, is managed by Selangor Forestry Department. Will this change if the ridge becomes a geopark?

“A more comprehensive management plan and better clarity are needed before the state goes ahead with these plans. Abdul Rashid says a team of experts opine that the quartz ridge is not ready to be nominated for Unesco certification.

“The state should detail exactly what these plans to develop the site into a geopark would entail, ” she said.

Leela emphasised that any additional tourism or economic ventures in the area could be detrimental to the ridge.

“The ridge is very fragile, and as it serves as the walls for the Klang Gates Dam, the place must be kept intact.

“This (making a geopark) could open up the area and it is worrying to think about what other plans this could bring. 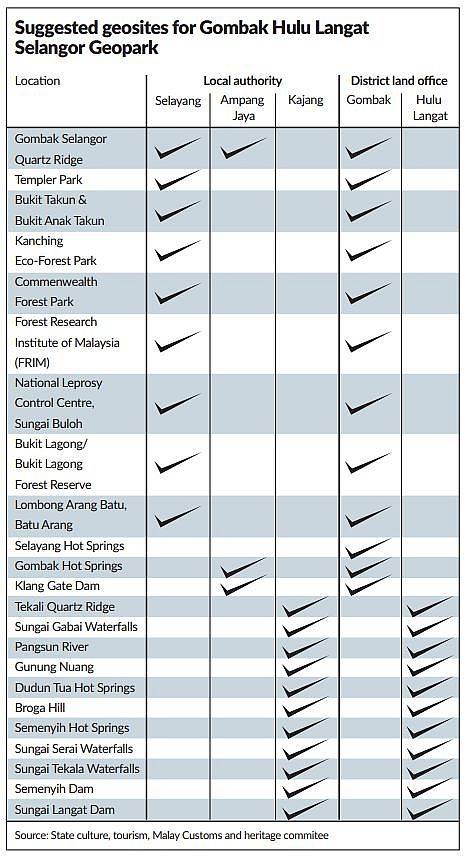 “Sometimes, the best way to preserve a place is to simply leave the area as is, ” she said.

At over 108,000ha in size, the Selangor Heritage Park is the third largest park in peninsular Malaysia and is a result of a joint project undertaken by Trees and the Selangor government.

Taman Melawati Residents Association (TMRA) chairman Azhari Abdul Taharim said there was no point in pursuing certification for a national heritage site if the state continued to allow development.

“There is constantly new developments being approved and many of these are at the edge of the foothills of the quartz ridge.

“There are also many individually-owned plots of land near the ridge. The pristine waters are one of the main attractions of the Bukit Lagong Forest Reserve, one of the areas being considered for development as a geosite. — Filepic

“Although they are designated as agricultural land, the owners can in future decide to change the land status and develop it, ” he said.

In April last year, TMRA along with Society of Eco Greater Melawati (SeeGem) had called for all future hillside developments in the area to be reviewed and, if necessary, halted.

“The Federal and Selangor state authorities should undertake a firm commitment to preserve the environment and ecosystem of the Gombak quartz ridge by rejecting any development, including a proposed power line realignment and extension of EKVE, ” said TMRA and SeeGem.