One of the colourful cultural performances staged as part of International Night 2019.

With the hall decked with maroon decorations in keeping with the university college’s crest and student bodies’ logos, the occasion saw its student population from 27 countries coming together to highlight inclusivity.

The motif of a dove was used to signify the peaceful and vibrant campus life enjoyed by First City UC students, said student council president Kenneth Bedhan Ndungu, who hails from Kenya.

“As an international student, I believe there are many windows of opportunities to interact with people of different cultures and creeds.

“As the organising committee, we wanted to make this year’s edition a success.

“Having attended the previous editions in 2015 and 2017, I told myself and the organising committee that we had to push ourselves to ensure our event is on par with other universities, ” said Ndungu, First City UC’s first international student council president.

A significant difference at this year’s International Night was the inclusion of not only First City UC’s student population but also communities around it.

“This event was not only open to our students, we also tried to bring in the Bandar Utama community as we wanted to get them to understand the diverse cultures here, ” he added.

In addition, the speeches explained the significance and inspiration for the dove motif, which was used as a unifying point for the night.

Some of the other highlights included cultural performances representing different countries such as Congo, Sudan and China, alongside a lucky draw session.

Prizes were also awarded to the best dressed man and woman at the event.

Beyond bridging the gap between different cultures and communities to allow them to interact and learn more about one another, the event also served as a testing ground for its students to experience a taste of the working world.

valuable opportunity to put theory into practice, as it involved working with different associations, communities and stakeholders to make the event a success.

For instance, the event’s organising committee secured the assistance of First City UC’s Hospitality Club to provide food and drinks to guests.

“Being in hospitality, this event was a chance to incorporate what I’ve learned into real life applications.

“It brought a new perspective as I had to learn about embassies and VIPs and the intricacies around that. I believe thanks to this experience, I have grown as a leader.

“There was a lot of focus on coordinating and balancing the event to cater to both the students and the larger community as a whole, ” added Ndungu.

The event was attended by dignitaries and guests including First City UC governor and director Tan Sri Teo Chiang Liang and his wife, Puan Sri Luan Teo, delegates from foreign embassies and other community bodies.

Ndungu believes the event would help highlight to embassy staff that First City UC has a thriving and diverse community of international students.

“Hopefully, this will in turn lead to an increase in international student enrolment at First City UC.

“Despite hailing from different continents as far as Africa and Europe, we want our student population to feel right at home in Malaysia.” 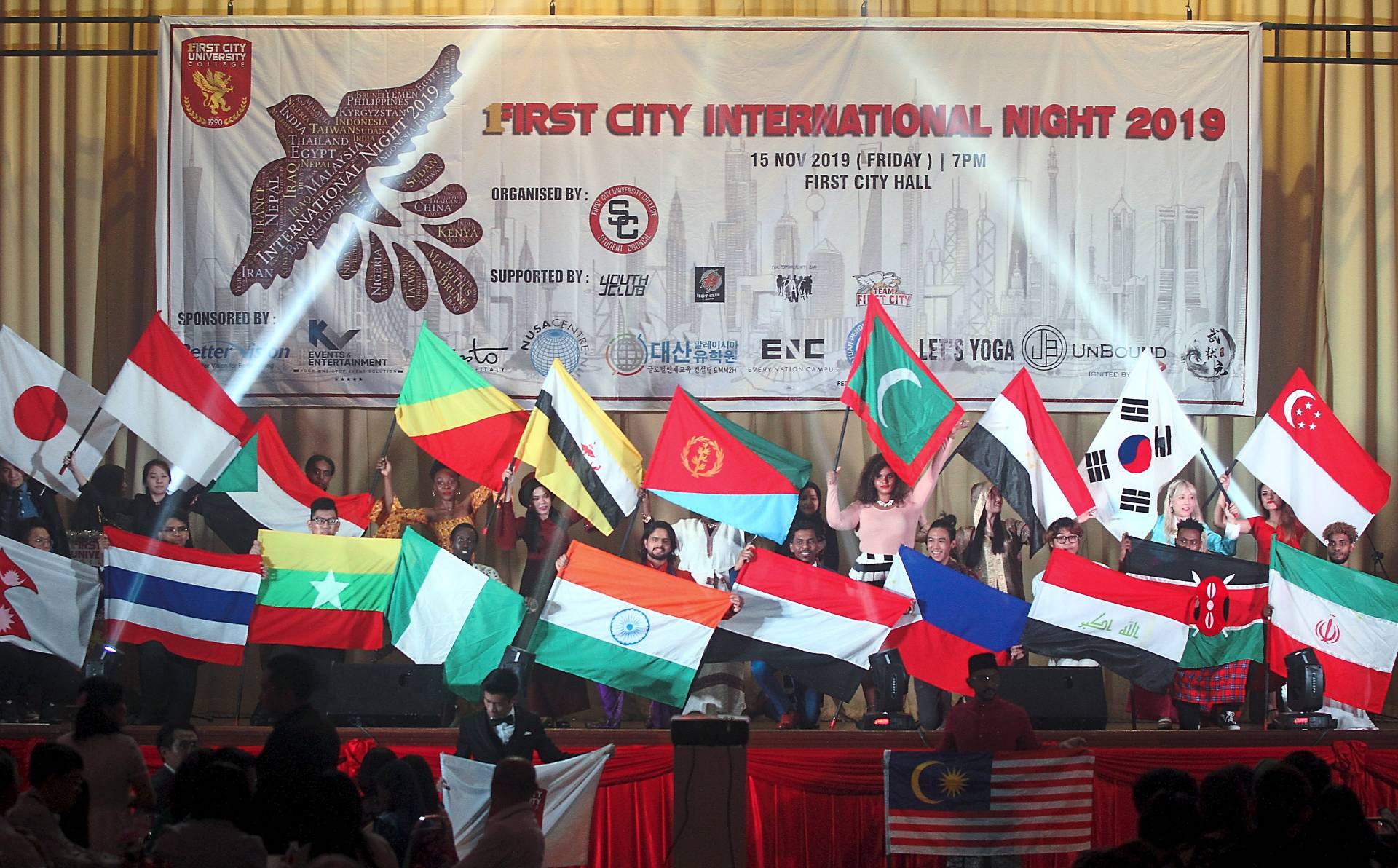 One of the colourful cultural performances staged as part of International Night 2019.

Teo (centre) with his wife and guests.