Building more than a house

A BAND of volunteers were working hard sawing wood planks and hammering nails to build a house when the light drizzle quickly turned into a downpour, thus halting their work for the day.

When the group resumed work the next day, they were met with scorching heat from the sun.

None of this dampened their charitable spirit, though, as they diligently continued working, finally finishing the job with a coat of paint.

Braving the rain and the heat, some 34 volunteers from Star Media Group broke sweat to build houses for the Orang Asli at Kampung Orang Asli Jeram Kedah. The village is located in Ulu Beranang, Lenggeng, Negri Sembilan.

The new houses, built at a cost of RM35,000 each, are meant to replace the old shelters belonging to two low-income families.

Each house measured 600sq ft and comprised a veranda, living room and two bedrooms with a solar panel installed on the roof. A separate bathroom with proper sanitation facilities was also built.

The owner of one of the new houses, Tepi Teresa Takam, 47, was delighted that her wish to have a proper home to live in had finally come true. 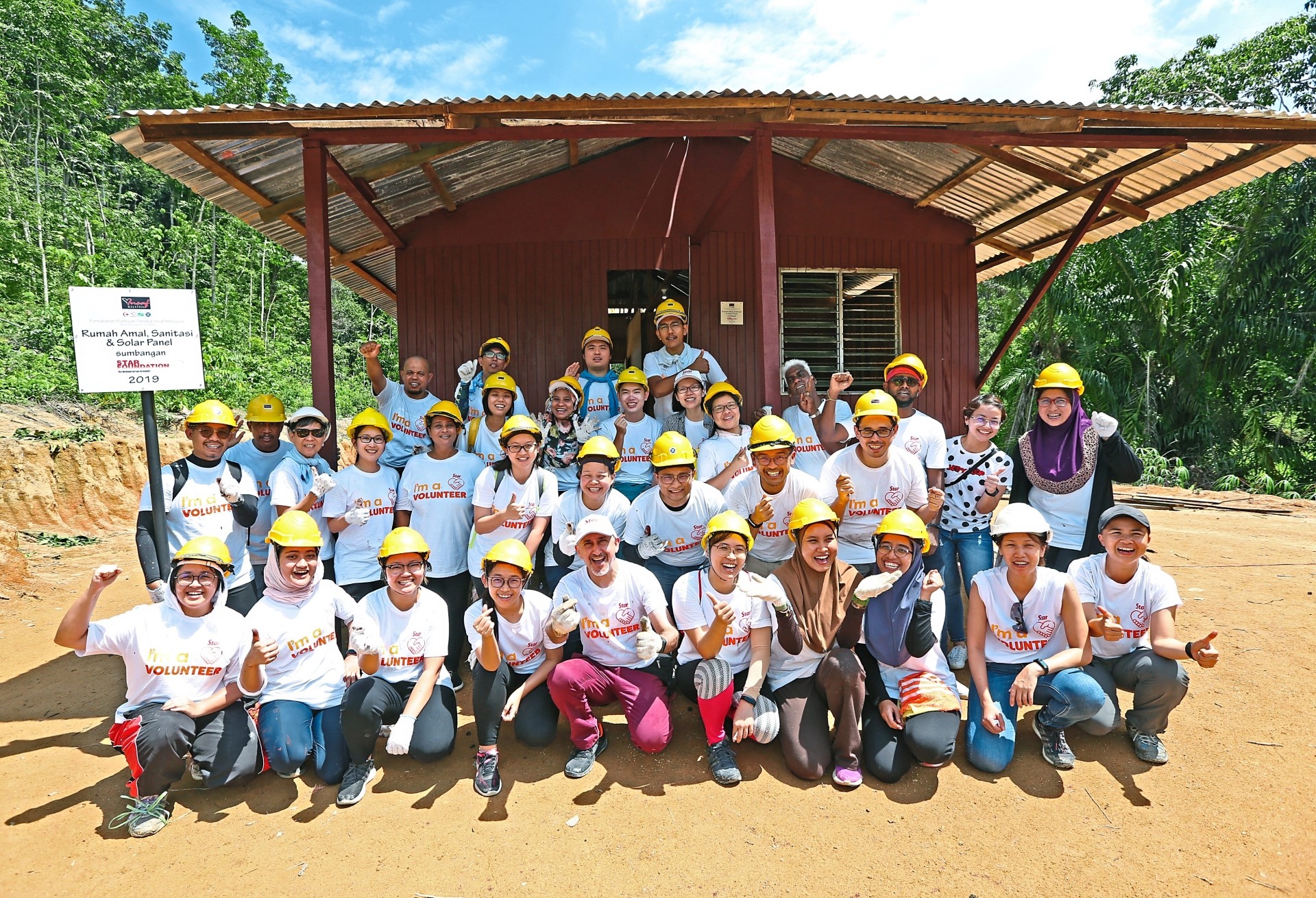 Her family of five had been living in a hut that her husband built seven years ago.

“The hut is small and we had to jostle for space. But we have more space now since my two older children got married and left to live with their new families.

“Now it is just me, my husband and our 13-year-old daughter.”

Tepi Teresa said it was common for venomous and wild animals to venture close to their homes, so living in the small hut meant that they were vulnerable to attacks.

“Sometimes I worry about the presence of snakes near the area where we bathe, ” she said while pointing to a small partitioned area outside the hut. 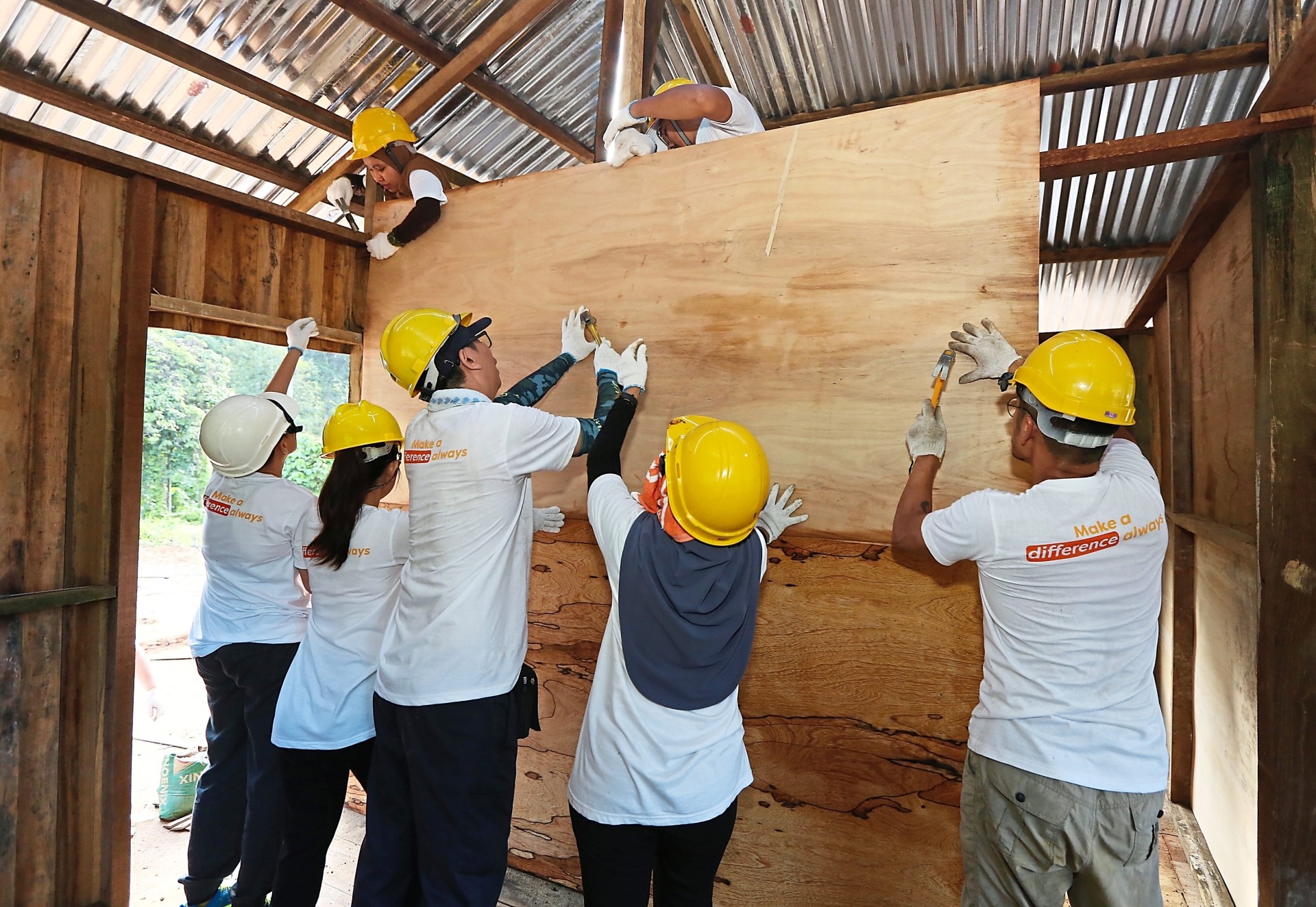 Volunteers placing a room partition in the house.

The couple said they would not completely abandon the hut after they move to their new home.

“We had applied for a house from the Orang Asli Affairs Department but was informed that they were unable to provide one due to lack of funds.

“We are really glad that there are good people out there who are willing to help, ” said the 50-year-old Sari who does odds jobs in the village such as collecting banana leaves and wood to sell.

The other house is built for Yusli Lisat and his wife, Rubi Tiga. The couple has two sons aged three and eight years old.

The two-day home-building project was a collaboration between Star Foundation and non-governmental organisation Insaf Malaysia that gives aid to marginalised groups.

One of the houses slowly taking shape.

Insaf Malaysia president Ishak Abdul Kadir started the programme seven years ago after he met some college students in Jogjakarta, Indonesia, who organised a similar project during their semester breaks to help the poor.

“Many Orang Asli families are in the low-income group.

“On average, they make around RM400 to RM500 a month, which is hardly enough for them to afford a proper house, ” he said.

Some of the houses at the village were built using bamboo.

Ishak hoped that free electricity from the solar panels on the newly-built houses would help Orang Asli children study better and that the families no longer need to rely on oil lamps.

One of the houses being painted as a finishing touch.

“The children often rush to do their school homework before the daylight fades, which is inconvenient.

“With free electricity, they can also study at night.

“It is important for the Orang Asli children to have a conducive home to ensure they can perform academically, ” added Ishak.

Star Foundation assistant manager Selina Ng said the foundation, which is the charitable arm of Star Media Group, had partnered with Insaf for five years to build houses for the poor.

“Including these two new houses here at Kampung Orang Asli Jeram Kedah, we have built 15 houses in total for Orang Asli in the peninsula.

“Insaf helps to identify the recipients and we provide the funds as well as manpower in the form of volunteers.”

Ng saw great value in the programme, saying that the hands-on experience where the volunteers lent time and effort enabled them to better appreciate the difficulties faced by the Orang Asli in their daily life.

“Instead of just donating money, the volunteers work together on-site to help improve the living condition of the needy. 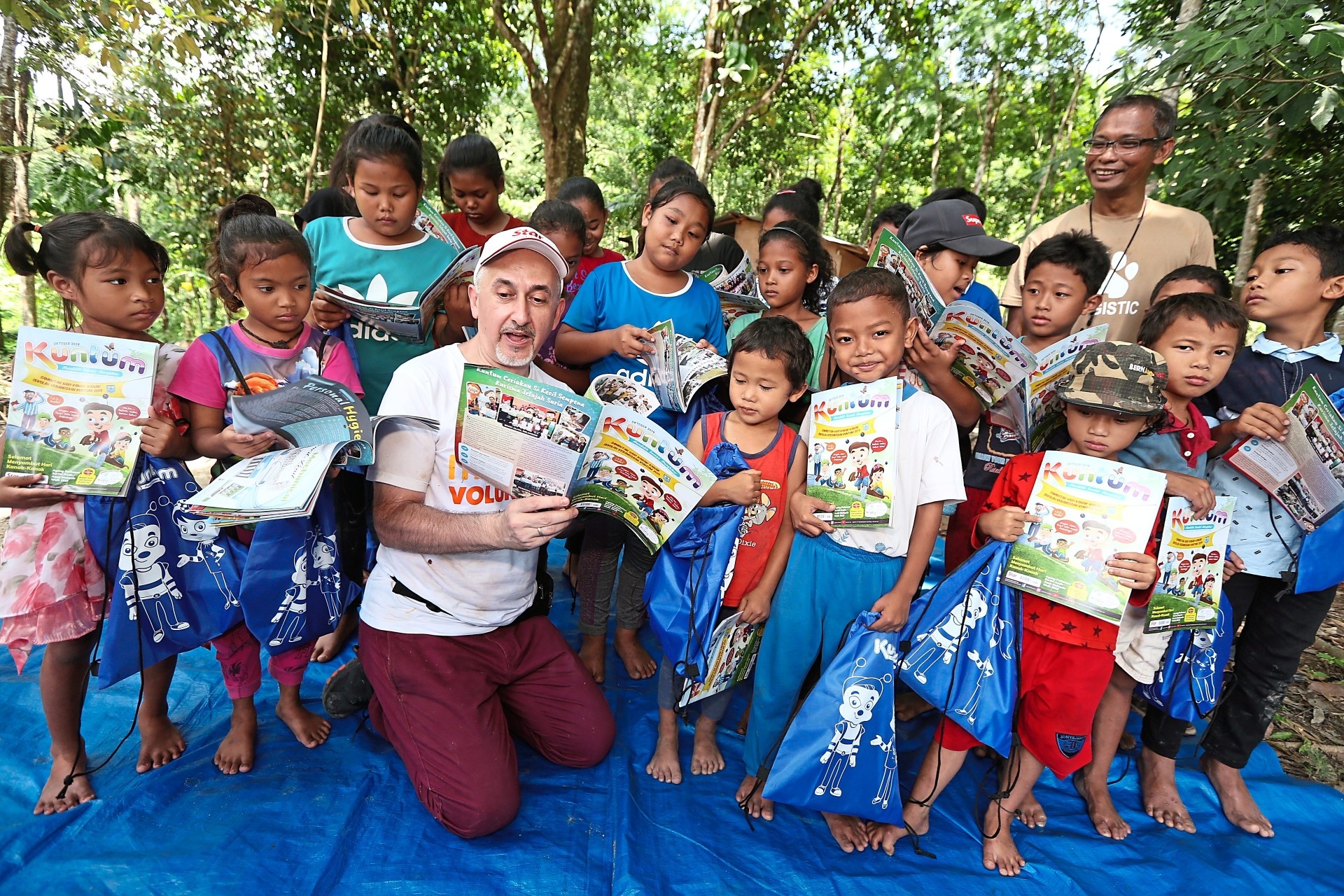 Vogiatzakis showing the Kuntum magazine to the Orang Asli children.

“This programme also helps to bring together employees from different departments who may not have met each other yet or interacted much before.”

Not missing the opportunity to pick up the hammer and paint roller was Star Media Group chief executive officer Andreas Vogiatzakis.

Drenched in sweat after the work, Vogiatzakis said he was humbled by the experience and was glad to work alongside other employees.

“We take many things for granted because we have a comfortable life compared to the people here.

“We get caught up in boardroom meetings, trying to find solutions to business problems and move the economy forward, but once you come here, you start seeing life from a different perspective.

“It feels good to be surrounded by like-minded people who want to help enrich others’ lives.

“It brings down the barriers between us. People from every race, faith and ideology all came together to change the world, one house at a time.”

Tepi Teresa Takam, Sari Atan and their youngest daughter standing in front of their old home, which was built from bamboo.

Vogiatzakis opined that media organisations had a huge role in helping the poor and marginalised.

“It is our responsibility to bring the issues to the forefront and make people aware of them, to affect society in a positive way, ” he added.

Although he accidentally hit his fingers during construction of the house he was assigned to, Star Media Group assistant manager (Group People) Mahendraraj Mariappan said he appreciated the opportunity to volunteer.

“I can already imagine the children playing inside the houses. It is good that they can now have some comfort.”

“Many of us (volunteers) had never met before and none had any actual construction skills, but we still managed to build the houses from scratch within two days.

Tepi Teresa and her family worry about snakes coming into this small partitioned area that is the family’s bathroom.

“In addition, seeing for myself what the Orang Asli go through really makes me realise their plight.”

Advertising support executive Afifah Abdul Latib saw the programme as a win-win situation for both the Orang Asli and volunteers.

“It is really satisfying to know that I had a hand in building their homes, not to mention it helped me shed some calories, ” she quipped.

Payroll executive Nurfilza Adilah Ahmad Khair said she and her husband, who is not an employee with Star Media Group, decided to volunteer for the project to experience building a house.

“We live in Seremban and we thought it would be nice to come and lend a hand while gaining some useful handyman skills.”

After the construction work was completed, some 21 Orang Asli children aged between seven and 14 were presented with stationery supplies as well as the latest copy of Star Media Group’s Kuntum magazine.