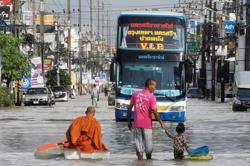 Chua (right) and Hasrul visiting the site of the river upgrading project.

THE latest flooding incidents along Jalan Kawasan Perindustrian Rawang, Selangor was the last straw for residents who took to social media to complain.

Many left messages on Rawang assemblyman Chua Wei Kiat’s Facebook page, asking him to come up with a solution.

Floodwaters covered parts of the main road near Aeon Rawang affecting a row of furniture shops and a petrol station.

Chua visited the site with personnel from the Selayang Municipal Council (MPS), Selangor Drainage and Irrigation Department (DID) and Public Works Department (JKR) to check on the situation.

“The area has suffered flash floods many times but the most recent ones were not as bad as previously,

“We admit we need to improve several areas in order to solve this issue,” said Chua.

Currently, JKR is widening Jalan Kawasan Perindustrian Rawang and upgrading Sungai Gong but the project will only be fully completed in 2021.

“We will see improvements once certain phases are completed,” said Chua.

Meanwhile, JPS was also upgrading a retention pond nearby to cope with ongoing developments in Rawang. A stream that leads to Sungai Gong is blocked by concrete from a damaged bridge.

The works which involve widening and deepening the existing water retention pond, will be completed in September.

Plans are also underway for a “missing link” on Jalan B27.

Chua is working with the state and Federal Government to seek approval to upgrade the 2km link and a river under the 12th Malaysia Plan.

Chua also visited a stream which flows into Sungai Gong near the Rawang toll which was said to be the cause of frequent flooding near the exit.

He found out that the concrete bridge connecting the main road to a factory site was badly damaged.

Rubbish and concrete blocks had also fallen into the stream, covering several water outlets that obstructed the water flow.

JPS Gombak district engineer Hasrul Hisham Abdullah said the bridge would have to be demolished.

“We need to check who built the bridge and if it is legal.

“If it is illegally built, then we will tear it down,” he said.

When asked how he was coping with the nasty messages left by social media users, Chua said, “Every time it rains, I am prepared to face the people who will be complaining.”

He said the residents and motorists need to be patient as it would take time to solve such issues.

“Once this project is completed, I am sure everything will be okay,” added Chua.