Digging into future of e-wallet

Mohd Khairil sharing his insights at the forum.

ONLY during a forum on e-wallets that you will get three major brands – GrabPay, Boost and Touch ‘n Go –with each claiming to be the “biggest e-payment platform” in the country.

This was the running joke during the “E-Wallet Forum 2019 – Enhancing and Embracing the Future of Technology” at Menara Star in Petaling Jaya, consisting of a half-day session to update and discuss the latest e-payment methods. 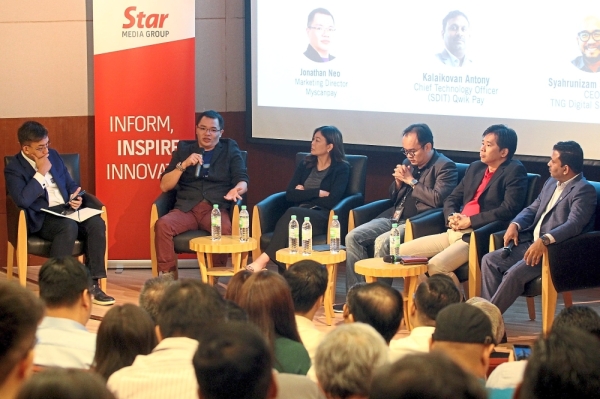 But while the speakers informed attendees about their respective company’s updates and future projection, Mohammad Ridzuan started the morning off with an introduction to the e-wallet system and – more importantly – the difference between e-wallets and credit cards as well as how we are moving towards being a cashless society.

“Paying using e-wallet means you have to have money to use it, unlike credit cards. There are 52 million debit and credit cards in circulation in Malaysia.

“We have a lot of credit problems in Malaysia. Household debt here is high because many people are living on credit, as reflected in how we use debit and credit cards as a form of going ‘cashless’.

“To move from this to e-wallets will take a major mindset shift because we are so used to putting cards in our (physical) wallets,” he said.

He also allayed people’s fear of using e-wallets, saying it was much safer than physical wallets containing cash.

“If you lose your physical wallet which has money and important documents, you make a police report.

“But with an e-wallet, a thief cannot steal your money because of the encryption in a cloud service.”

However, he said financial literacy in Malaysia was worrying as not many people were aware of how money was produced, let alone about cryptocurrency, for example.

“This is why we see many people under 30 are now bankrupt.

“E-wallets are not risk-free. You need to have certain level of knowledge about the technology and rights as a consumer under Personal Data Protection Act (PDPA).”

Later, Mohd Khairil introduced the Boost app and how its drive was to promote financial inclusivity to the under-served community.

“These are merchants like hawkers who don’t have the point-of-sale system in their premises.

“With our scan-and-pay methods, the hawker can print a QR code and put it up at the stall and consumers can use their smartphones to scan and make payments, while some hawkers will have their QR codes on their mobile devices.”

He said aside from being an e-wallet, Boost helped micro businesses expand in terms of providing them small loans.

“They want to expand, but they cannot go to the banks.

“We build a business around that and we have a processing system for loan approval.

“We are helping micro SMEs grow their business,” he added.

Meanwhile, Ooi said since launching 18 months ago, GrabPay has branched out to eight countries, 336 cities and has 152 million downloads.

“One in every smartphone in South-East Asia has the GrabPay app.

“Under Grab Financial launched a year ago, we too offer micro insurance and micro loans.

She said GrabPay was the only e-payment company with six money licencees across all major South-East Asian economies since the end of last year.

“We are number one in the region by total payment volume and monthly active users.

“Since we launched GrabPay, we have doubled our payment volume and quadrupled our monthly active users, and non-transport transactions have increased by six times,” Ooi highlighted.