“YWP is not a government agency and there is no specific government mandate requiring the FT Minister to be responsible for it," he said.

The conflict of interest that arose from this, he said, affected how the Taman Rimba Kiara development issue was handled during Tengku Adnan's time.

“If the chairman of YWP needs something to be done in relation to the lands owned by YWP, he talks to the FT Minister (i.e. himself), who then directs the Datuk Bandar to act in accordance with his directions effectively.

“This serious conflict of interest is why Tengku Adnan was so vocal and aggressive in pushing for the Taman Rimba Kiara development – because the RM3bil mega project would benefit his YWP to the tune of hundreds of millions.

“It also explains why Tengku Adnan allowed the waiver of development order conditions that were imposed by DBKL on the project.

“It is also likely explains how 48% of a public park sitting on government land could have been carved out (and turned) into a land title for mixed development in favour of YWP without any public consultation or public tender.

“The question today is whether that same conflict of interest continues to manifest itself in the decision-making relating to the resolution of the Taman Rimba Kiara matter,” Abdul Hafiz said.

It was in Tengku Adnan’s time that a development order was given to build eight blocks of 42 to 54-storey high-end serviced apartments and one 29-storey block comprising 350 units of affordable housing for longhouse residents near Taman Rimba Kiara.

The development was ordered to be carried out on a 4.85ha land in TTDI, which was alienated from a bigger piece for development.

The statement said YWP was a limited company incorporated under the Companies Act and was not owned by the government as clarified by a parliamentary reply by FT Minister Khalid Abdul Samad to Lembah Pantai MP Fahmi Fadzil, who asked for information on the assets and liabilities of YWP from 2008 to 2018.

“Therefore, it is no different from any other company and it is not a government organisation with government responsibilities,” said Abdul Hafiz. 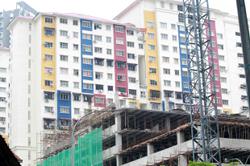