A gathering place for friends and neighbours Movie night: Chillaxing at an outdoor screening with lots of grub from pop-up food vendors at The Buzz.ar.

GETTING the places right to make it work is an ideal that has become part of Gamuda Land’s planning principles, and one imparted into its twentyfive.7 mixed development with The Buzz.ar which is open to all and sundry.

A township is like a house. It can be filled with families, friends, and even strangers clustered into one living space.

A community, on the other hand, is like a home – albeit on a larger scale.

Regardless of whether you know each other or are a group of unfamiliar people gathered in a place, a bond is formed through experiences together.

No longer simply a roof over your head, rather it is transformed into a place that keeps you looking out for one another, brings people closer together, and one in which you can go back to basic living and learn to look out for one another.

It is what Gamuda Land embraced: “placemaking” – developing thoughtful relationships among people in each of their townships through community spaces, in this case The Buzz.ar.

According to twentyfive.7 general manager Chu Wai Lune, all Gamuda Land developments have such community spaces.

“Being a responsible town-maker, we want to create places that people will call home, want to be a part of, to grow up and even grow old in.

“We mindfully plan every detail of our towns, and to do it right, we invest upfront to ensure strong foundations, not just in terms of brick and mortar.

“To us, a town is a community. Built with that in mind, and in respect of nature, it involves services, connectivity, infrastruc­ture, landscapes and softscapes,” explains Chu. Malaysian pastime: Chow time at the International Food Fest which was part of the Quayside Fiesta at The Buzz.ar in January.

twentyfive.7 in Kota Kemuning was first launched in 2017 with a balance of retail and residential units, which comprise a series of link houses, semi-Ds and service apartments alongside two-storey shop offices, while the Quayside Mall is under way and expected to be completed by mid-2020.

But providing facilities such as the mall and retail outlets are only one aspect of building a community.

“We inject a breath of excitement into the spaces in hopes of reaching out and engaging with residents, as well as bringing the wider communities together,” says Chu.

twentyfive.7 was designed as such, creating conducive platforms that facilitate interactions between a town’s residents.

These four elements are The Lake, The Loop, The Field and The Buzz.ar.Their community activation

spaces are shaped around The Lake, a playful waterscape with a musical water fountain called Aurora Rhythms to be installed by May.

The unique and whimsical centrepiece will inevitably draw visitors in as a talking point. Child’s play: A giant game set at The Buzz.ar to get kids outdoors.

Spotted around The Lake are shaded eateries built with panoramic views. These include Heritage Nyonya Cuisine Restaurant and the café Marc et Farid Patisserie, as well as a premium pet care centre, FURIIstyle.

Encircling this rippling, tuneful lake is The Loop, a 600m circuit that acts as a trail for the community to carry out daily activities.

From walking their dogs to jogging or cycling with free bike rentals, it is a safe pet-friendly park neighbouring Kota Kemuning.

The Loop itself is part of a larger effort to create seamless connectivity with lanes, like webs, that link all the houses within the township.

If The Lake is the heart of the township where people gather as a community, The Buzz.ar is its heartbeat.

Pumping energy and life into twentyfive.7, The Buzz.ar sets the stage for events and fun nights out for residents and visitors alike with striking giant chess and Jenga pieces, to say the least.

Playing host as its namesake, the inviting bazaar features farmers’ markets and other funfairs such as camping and outdoor movie screenings.

In Chu’s view, “The Buzz.ar is a hangout hot spot for eating and relaxation at twentyfive.7.

“It is also space to host the renowned Quayside Fiesta and other long-term community activities such as potlucks and family games.”

Then comes The Field – an open plot in The Buzz.ar where Football Talent Asia (FTA) will operate one football field and three futsal courts next month.

FTA is a professional Malaysian football academy that runs multiple programmes in the Klang Valley, including school football programmes, senior state league teams and a number of tournaments.

Partnered with Gamuda Land, it will provide Kota Kemuning with a platform for footballers to play, learn and have a good time, alongside the goal of football youth development. Connected: elements around The buzz.ar complement each other.

Mindful town-making principles run through the masterplan of the property developer’s design tenets.

These take into account liveability and convenience, respecting nature and the environment, enhancing community well-being, and most importantly, continuous innovation to remain relevant.

“When people begin to move in, they’ll experience a real difference. They’ll get a feel for the place and want to be a part of it,” says Chu.

He elaborates that each public space is given their own brand of unique components, such as Jade Hills Merchant Market and Gamuda Cove Discovery Park to name a few.

“Placemaking is about creating a point of differentiation for the communities in every township.

“The Kota Kemuning township, started more than 20 years ago, is a good testament to our town-making principles done right.”

So what is next for the property developer?

twentyfive.7 is opening registration to buyers looking for landed homes with the luxury designer villas, Luxura, with a total of 315 units at a built-up ranging from 2,594sq ft to 3,466sq ft.

“With mindful planning done right, we know that our towns will work,” Chu concludes.

Gamuda Land is hosting its Chinese New Year – A Journey to Prosperity event at The Buzz.ar in twentyfive.7 on Feb 23 and 24 (4pm to 10pm). 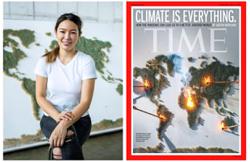