The team celebrating after receiving the recognition from MBR.

MORE than 300 volunteers from Universiti Tenaga Nasional (Uniten) came together for Project Newspaper “There’s No Planet B”.

The project aimed to fight plastic pollution by making 21,505 paper bags from used newspapers in one day, while getting recognition in the Malaysia Book of Records (MBR) for the “Most Number of Paper Bags made from Recyclable Newspapers”. It was held at South Court, The Mines, Seri Kembangan.

Project Newspaper was founded and directed by Bhoshaga Mitrran Ravi Chandran, 19, a Uniten undergraduate in Civil Engineering, while the event was organised by Uniten and its College of Foundation and Diploma Studies (CFDS) as well as Foundation Club, with joint project partner Lions Club of Kuala Lumpur City.

The team comprised 20 crew members and over 300 volunteers consisting of Uniten students, lecturers, family members and the public.

Newspapers weighing about 1,000kg were used to make the paper bags; 400kg was sponsored by The Star, 300kg from the university and the remaining 300kg was contributed by the community.

Bhoshaga said he was moved by National Geographic’s documentary on plastic pollution.

A group of marine environmentalists found a turtle with what they thought was a worm in its nose, only to realise it was a straw. Extracting it was no easy task and the poor turtle was in great pain.

Determined to make a change, Bhoshaga and his team decided to make the attempt to enter the Malaysia Book of Records.

He pitched the idea to his club and received massive support and guidance from club and project adviser Nurshuhaida Mohd Shokri as well as Samsuddin Musa and other lecturers.

The project began with a three-hour “Pre-Newspaper Festival” at The Link in Uniten.

During the activity, they were entertained by a live band performance by Astena and managed to produce 2,201 paper bags. 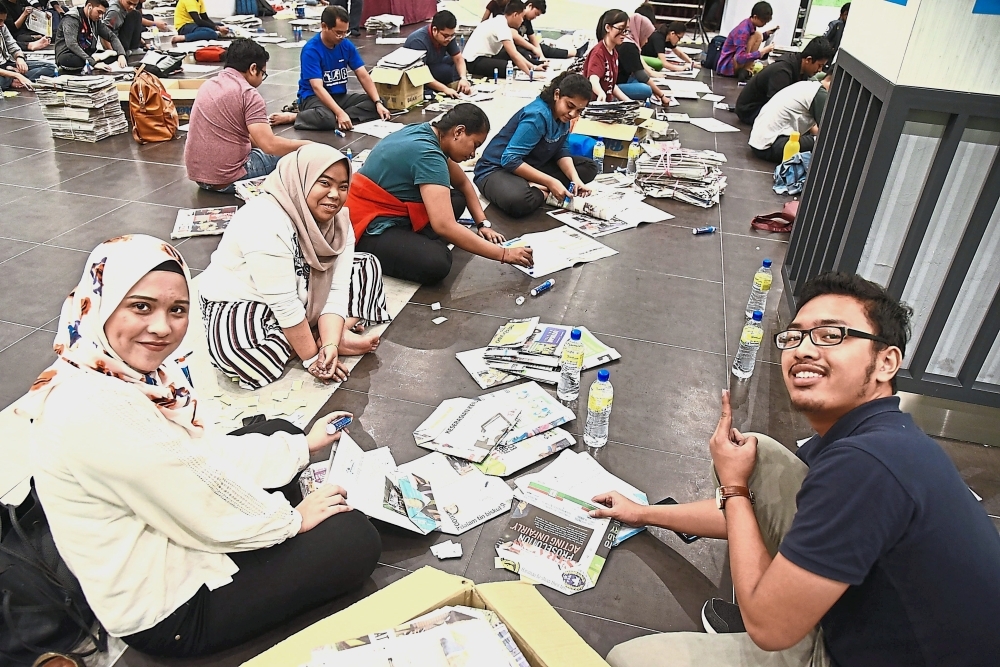 The second part of the project began five hours later at South Court, The Mines, Seri Kembangan, where the remaining paper bags were made.

Volunteers worked non-stop, only to take brief meals and prayer breaks as it was imperative to keep up with speed.

They sat in production lines of four, each carrying out their own tasks and finally tagging the bags with serial number stickers.

To reduce fatigue, the volunteers listened to music and were kept motivated by the live count of paper bags produced.

A total of 21,500 paper bags will be distributed to the public via the university and local participating businesses and malls.

The primary objective of Goal 12 is to ensure sustainable consumption and production patterns, while Goal 14 focuses on conserving and sustainable use of the oceans, seas and marine resources for sustainable development.

It is also in accordance with Uniten’s Zero Waste Campaign, where the university indoctrinates its students to adopt a “green attitude” by cleaning up and sorting waste.

Project Newspaper was sponsored by Uniten, The Mines Shopping Centre and The Star.