Yi Wei handing over funds to Leong for her father who is an acute heart disease patient and needs surgery.

MEMBERS of the public have been urged to make full use of benefits offered by the Social Security Organisation (Socso).

To date, many are unaware of Socso’s benefits which is entitled to all those who have been contributing to the fund from their monthly salary.

Recently, two recipients received lifetime support from Socso in the form of monthly payments, calculated based on a percentage of the last drawn salary of their deceased family member.

One of the recipients Lim Kwee Ming said the monthly sum would definitely help him reduce his daily expenses as he still has a son in school.

“I did not know I was entitled until I saw a poster about a talk by Socso in the Sungai Way New Village which led me to learn about the benefits after attending the talk,” said Lim, 54.

Lim’s wife passed away in May and he is entitled to receive a one-off RM2,000 funeral aid as well as a monthly payment, which is 65% of his wife’s last drawn salary.

Another recipient Ngu Leng You received funeral aid as well as monthly payment despite it being about 18 years since her son passed on.

“I was surprised that I still qualified as my son died in 2000 and after checks done by Socso, I can still receive the financial aid and 65% of his last drawn salary every month,” she said.

The 76-year-old, who lives with her husband who is in his 80s, can now breathe a sigh of relief as this monthly sum will tide them over especially with their daily expenses and necessities.

Unlike Lim, Ngu only received the one off RM1,500 for funeral aid because the increased amount was only enforced in 2016.

director Mohamad Ramli Ahmad Dahalan were present to hand over the aid.

“Actually such benefits have been around since 1985 and everyone who contributes to Socso is eligible to apply for it,” said Mohamad Ramli.

He added that the lifetime monthly benefits were usually given to the deceased’s spouse or children, below the age of 21 years or until they obtain their first degree in higher education.

“For example, if the deceased was earning about RM4,000 per month based on his salary slip for the past two years, the beneficiary will receive 65% which is about RM2,567 per month.

Also present to handover the cheques was Kampung Tunku assemblyman Lim Yi Wei who urged the public to check with Socso if they were entitled to receive the benefit.

“Not many actually know about this and I thank Socso for coming to Sungai Way to give a talk in Chinese and Bahasa Malaysia,” said Lim, who organised the talk together with Sungai Way village head Ding Eow Chai.

She hoped more communities would invite Socso to give such talks for the benefit of their neighbourhood.

Lim also raised funds for an acute heart disease patient who is in dire need of surgery.

“His case was firstly highlighted in the Chinese papers and since he is in my constituency, I decided to help ease his financial burden,” she said after handing over the funds to the patient’s daughter Leong Suk Wah.

Socso’s upcoming talk will be at the Kampung Chempaka New Village next month. 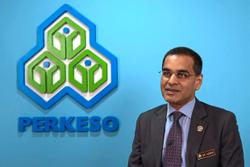