The Electric Techno Neon Gods from Taiwan joining in the procession and (below) devotees carrying a sedan chair on poles during the parade.

AFTER offering prayers and observing a vegetarian diet for nine days, it was time for devotees to send the Kew Ong Yeah (Nine Emperor Gods) back to heaven.

They burned joss papers and lit joss sticks for the deities at various temples on the Penang island and mainland.

Vibrant sounds from drums and cymbals filled the air during the grand procession at the Kuan Im See temple in Burmah Road on Wednesday night.

Over a thousand devotees — all dressed in white to signify purity — converged at the temple grounds for the ritual of offering prayers and receiving blessings. 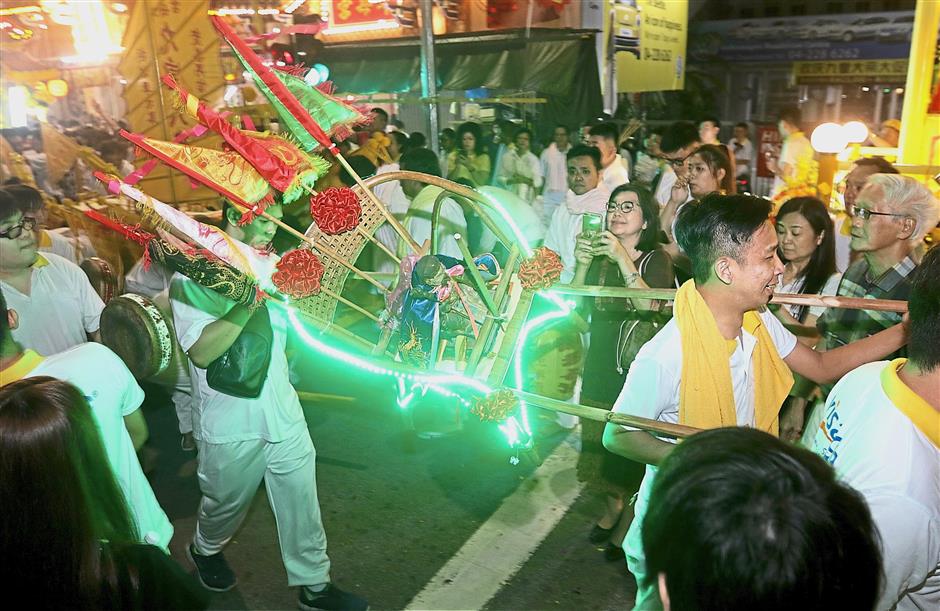 Devotees carrying a sedan chair on two poles during the parade.

They also gathered around brightly lit floats that accompanied the main yellow ceremonial boat to Weld Quay for the grand send-off.

The procession began as several devotees lifted and balanced over their shoulders the heavy wooden boat bearing the nine brother deities, sacred urn and joss paper.

“Once lifted up, it cannot be dropped onto the ground again until it has reached its destination,” said one devotee under the load.

The 2km journey that was also accompanied by lion dancers and mediums in trance passed Transfer Road, Chulia Street and many smaller streets before arriving at the Weld Quay jetty.

The boat was then set adrift in the sea to symbolise the return of the deities to heaven. 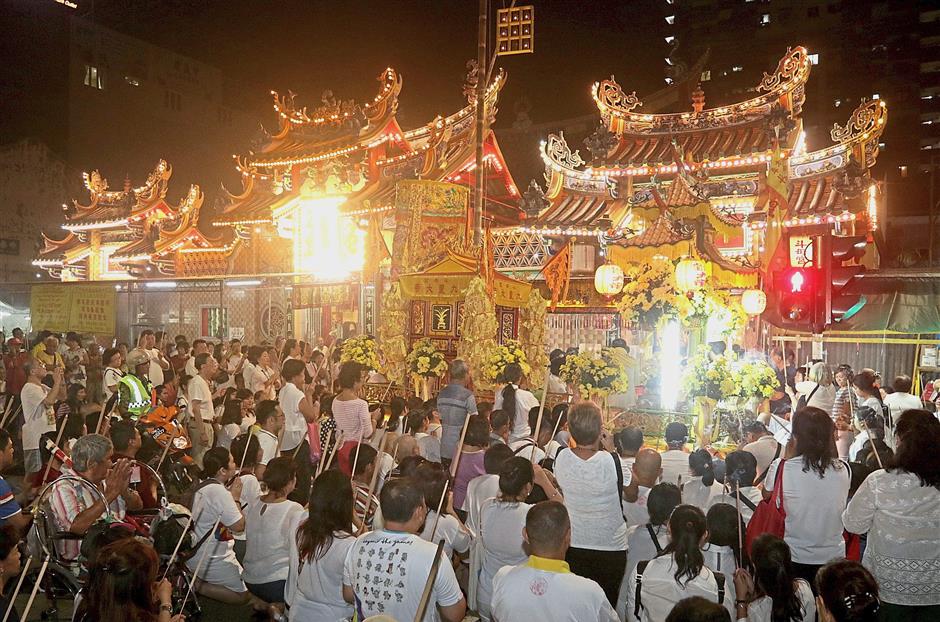 Temple chairman Gee Kok Kong said the temple had been celebrating the festival for almost 100 years and devotees mainly prayed for good luck and health.

“We get many devotees here every year, some seeking for solutions to life’s problems while others pray for better days ahead,” he said.

Among the many visitors at the event was postgraduate student Rani Azriani, 21, who was with four of her family members from Medan, Indonesia.

“This is our first time watching a lion dance performance, and we are fascinated by this event,” she said.

Another tourist from Cannes, France, who wished to be known only as Mustafa, said he had visited 45 countries in the last three years and this was also his first time watching the ritual.

“I have seen similar festivals in Vietnam, China and the Philippines, but I have not seen this Nine Emperor Gods festival before,” he said. The festival observed by Taoists is dedicated to the nine sons of Dou Mu, the Goddess of the North Star, who is believed to control the Books of Life and Death.

Her sons, deified as ren huang (human sovereigns), are said to have the ability to cure illnesses and confer luck, wealth and longevity to devotees.

Devotees believe the Gods came through the waterway and processions are usually held from temples to the river or seashore as a symbolic gesture.

The festival is usually held from the first to the ninth day of the ninth lunar month. Devotees taking turns to pass through a yellow arch before getting the back of their shirts stamped with the sign of an amulet believed to give them protection from harm.