OPEN burning activities in Kampung Johan Setia in Klang has continued to pollute the air, much to the anger of thousands of residents living around the peat soil area.

The residents claim that the haze problem affecting the townships due to the open burning activity at Johan Setia has not been resolved since 2008.

There have been many promises by politicians including state assemblymen, MPs and the state government but there has been no permanent solution.

In a proactive move, the residents have even set up a Facebook page called “Stop The Burning at Johan Setia” in a bid to pressure the authorities to resolve the issue.

A check by StarMetro revealed that open burning in Johan Setia, which comprises plantations as well as farm land occupied by small holders, and several housing estates, was committed mainly by residents themselves. An illegal dumping spot with smouldering smoke due to open burning activities in Kampung Johan Setia.

Due to lack of surveillance from the enforcement authorities, including the Department of Environment (DoE), the check also showed that unscrupulous individuals, including waste contractors, were dumping and burning waste in the area.

Environmental activist Lim Teck Wyn, who is a member the Malaysian Nature Society (MNS), said residents were fed up with the haze caused by the open burning in Johan Setia.

He said the battle against open burning had been going on for too long and it was time the authorities acted against those found guilty of committing the offence.

“The issue is ongoing for decades. We were given a lot of hope by the state government when they announced that various drastic measures were introduced to prevent farmers from conducting open burning, but it was all in vain. “There has been a lot of talk at the state government level and even at the Federal level as the matter has been raised in parliament by Klang MP Charles Santiago, but all that have not changed anything,” said Lim, who lives in Kota Kemuning.

State DoE director Siti Zaleha Ibrahim said the department was working closely with the local authorities and the Klang Land Office to handle the open burning issue in Johan Setia.

Numerous fines have been issued against those caught conducting the illegal activity, she said, adding that court action had also been taken against repeat offenders and those caught red-handed conducting open burning on a large scale.

“We are unable to do anything once the fire is lit, but we can act against the culprits if we have information on the activity and those who commit the offence.

“We rely on the public to provide us information with photos, including the vehicles involved in carrying out the illegal activity,” said

Besides the open burning conducted by the farmers, Siti Zaleha said the DoE also identified contractors who illegally dump waste.

“Any form of open burning is an offence under the law.

“I believe we will be able to reduce open burning activity if the public can play a positive role by feeding DoE with crucial information at the right time so that we have sufficient time to nab the culprits,” she said.

Besides placing notice boards to warn against open burning, she said DoE’s enforcement team had also been conducting daily patrols, including weekends and public holidays, at various hotspots in the state including Johan Setia. 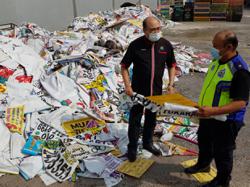