IT took more than two weeks for 17 people to assemble a specially made Thorana at the Buddhist Maha Vihara temple in Brickfields.

A Thorana is an arched gateway built for ceremonial purposes in Hindu and Buddhist architecture.

The Thorana, which took a month to complete, was gifted by the Sri Lankan government to the temple to commemorate the 60 years of diplomatic relations between Sri Lanka and Malaysia.

The Thorana, which stands at 18.3m and lit up by 35,000 bulbs, depicts the story of enlightenment of a nun named Bhikkhuni Kundalakesi.

This year marks the first time the temple will light up a large Thorana for Wesak Day from 7.15pm to 11pm every night until June 1. 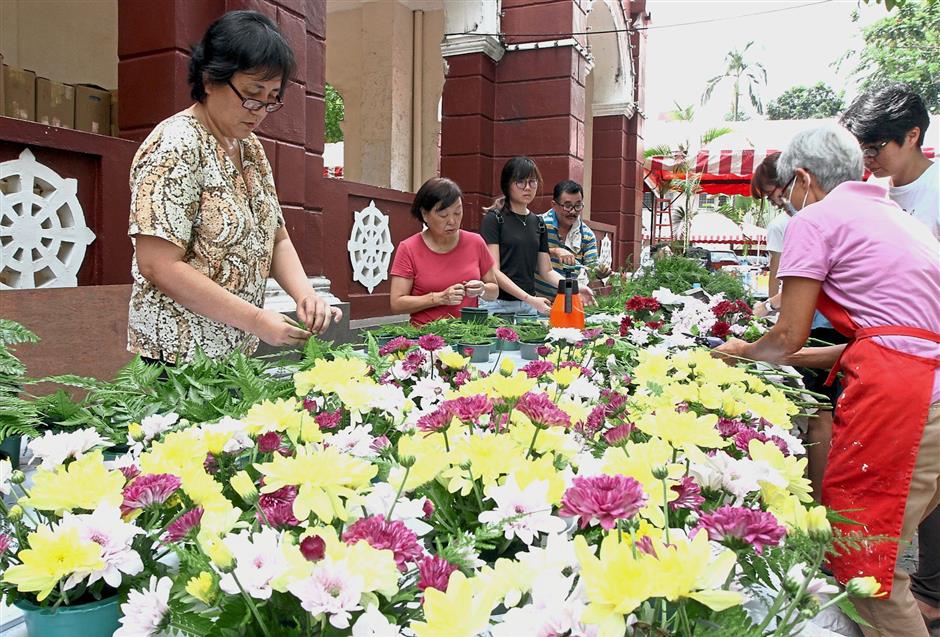 Volunteers preparing flowers for devotees to pick up when placing donations at Buddhist Maha Vihara temple in Brickfields.

The Joint Wesak Celebration Committee comprising 50 Buddhist temples and societies in the Klang Valley lighted up the Thorana for the first time on May 26 to start the celebrations.

Wesak Day commemorates the birth, enlightenment and death of Buddha.

Joint Wesak Day Celebration Committee honorary secretary-general A. Hemadasa said 5,000 volunteers from the temple devoted their time and effort to prepare for the Wesak celebrations.

From preparing flowers and joss sticks to spring cleaning, the volunteers followed a roster of activities to make the event a smooth process until tomorrow.

Hemadasa said the celebration on Wesak Eve would consist of sermons and blessings including lighting 15,000 oil lamps. Hemadasa says 15,000 oil lamps will be lighted up for Wesak Day.

“A dance troupe of 16 dancers from Sri Lanka is here and will perform tonight,” he said.

Tomorrow, Wesak Day will begin at 7am with the raising of the Buddhist flag followed by prayers and sermons.

“We will distribute 8,000 rice packets from 11am while free drinks prepared by temple devotees will be served throughout the day,” he said.

Hemadasa added that on Wesak night, thousands of devotees holding lighted candles will participate in a procession of 20 colourfully decorated floats.

The floats, made by devotees from different societies and temples, will ply a 12km route after its launch by Transport Minister Anthony Loke at 6pm.

The temple will also hold a blood donation drive tonight and tomorrow.