Nolee flagging off the Heritage Cycle Trail at the fest.

THE Taiping Lake Gardens took on a carnival-like atmosphere when tourists and locals alike thronged the famous scenic park for Pesta Taiping 2017.

The two-day event was held as part of the Taiping Berpesta 2017 which started in August, and would end in December.

Themed “Raintown Retro”, the fun-filled event was organised by People of Remarkable Talents (Port), with cooperation from the Taiping Municipal Council and the Northern Corridor Implementation Authority (NCIA).

Port is an initiative by the state government to provide the space and opportunities for youths to develop their talent in arts. An artist working on a mural at Taiping Lake Gardens.

The park was adorned with more than greens with a spectrum of stalls set up, selling antiques, handicrafts, t-shirts, stone art, clothes, toys, and batik among others.

On top of that, there were exhibitions of old bicycles, cars, and graffiti art held under the shades of the century-old rain trees.

Some 34 old bicycles of various brands, sizes and colours, including two-wheelers used by postmen in the olden days, were brought in by the Kinta Classic Bicycle Club.

Its chairman Bahri Anshary, 61, said the bicycle owners were all dressed like the olden era for the occasion.

Bahri, and avid collector of the bicycles, said he had about 70 old bicycles in his possession.

“Some of these bicycles were bought from as far as Indonesia, while the rest were from all over Malaysia,” he said when interviewed at Lake Gardens. 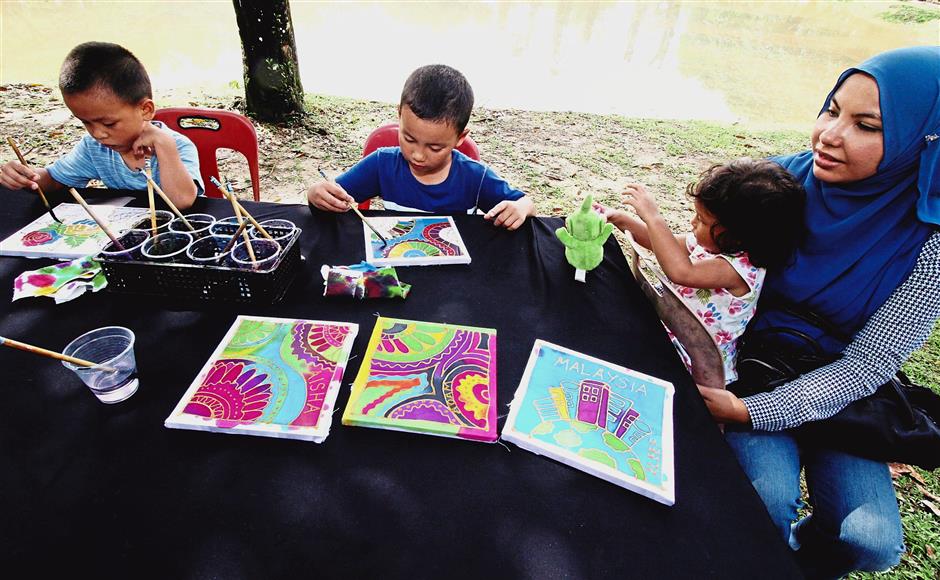 Children trying their hands at a batik-drawing session during the Pesta Taiping 2017 at the Taiping Lake Gardens.

Another member of the club, Mohd Sukari Saidin, 34, who was dressed like a colonial officer, said he had 34 bicycles in his collection.

He said he bought the bicycles for about RM20 each, but spent thousands in repairs.

“People normally just keep these bicycles in their garage, I would ask them to sell the vehicles to me, and then slowly take my time to repair them.

“It is good that through the club we are able to exhibit our bicycles, and to re-live the olden times as we dress up according to the theme,” he added.

Nolee later told reporters that the event was one of the main programmes under Taiping Berpesta 2017.

She said the state government would like to thank their partners, namely the council and NCIA, in making the events successful. Visitors looking for bargain at the car boot sale.

“This is one of the ways to boost tourist arrivals in Taiping, and we can see that hotels are enjoying full occupancy during weekends and school holidays,” she added.

Nolee said the state government allocated RM1.2mil for the Larut British Malaya programme to be held in various locations in Taiping from Dec 25 to 31.

“The programme will focus on the re-enactment of certain stories depicting the history of Taiping.

“Meanwhile, the illustrations will bring us back to the old Taiping, the history behind it, in accordance to the timeline.

“The programme will be held at Dataran Taiping, alongside a street bazaar as well as other pocket shows,” she added.

Redza, in his speech, said the idea of Taiping Berpesta 2017 was also to reminisce about life during the 1970s and 1980s. A family enjoying the cool atmosphere of Taiping Lake Gardens near one of the murals at the Pesta Taiping 2017.

“The programme is held to boost tourist arrivals in Taiping, and for them to keep coming back for more.

“Therefore, a host of activities ranging from cultural performances and talent shows, to handicraft sales activities will be featured,” he said.

Abd Rahim said there were some 30 locations and products in Taiping that could be made attractions for tourists, including signature dishes such as Mee Udang Kuala Sepetang, Koeytiow Doli, Mee Combat, Ais Kacang Black Mountain and Cendol Bismilah.

“NCIA has allocated about RM1.9mil to promote and market the tourism products of Taiping.

“The council on the other hand has about 10 programmes lined up for next year, and I am anticipating more to come as those involved in Taiping Berpesta are keen to continue,” he added.