Wreckage of aeroplanes displayed on the edge of a landing strip in Songon Dagbe, Ivory Coast. — Photos: AFP

Aziz Alibhai is showing the visitor his big love – an astonishing collection of plane wrecks that he wants to turn into an atypical tourist attraction.

Airliners in various stages of genteel decline lie on his property in Songon, located between forest and lagoon about 30km from Ivory Coast’s economic capital, Abidjan.

But Alibhai, an affable entrepreneur in his 70s, doesn’t like to hear the site described as a “graveyard”.

For him, these former giants of the skies are worthy of respect, and they are a potential dollar-earner too.

In the wake of the post-electoral crisis of 2010-2011 that killed some 3,000 people in Ivory Coast, the businessman set out to buy planes that had been left abandoned at Abidjan airport.

“It cost me an arm and a leg but I was so excited,” he says, preferring to “not even remember” the price. 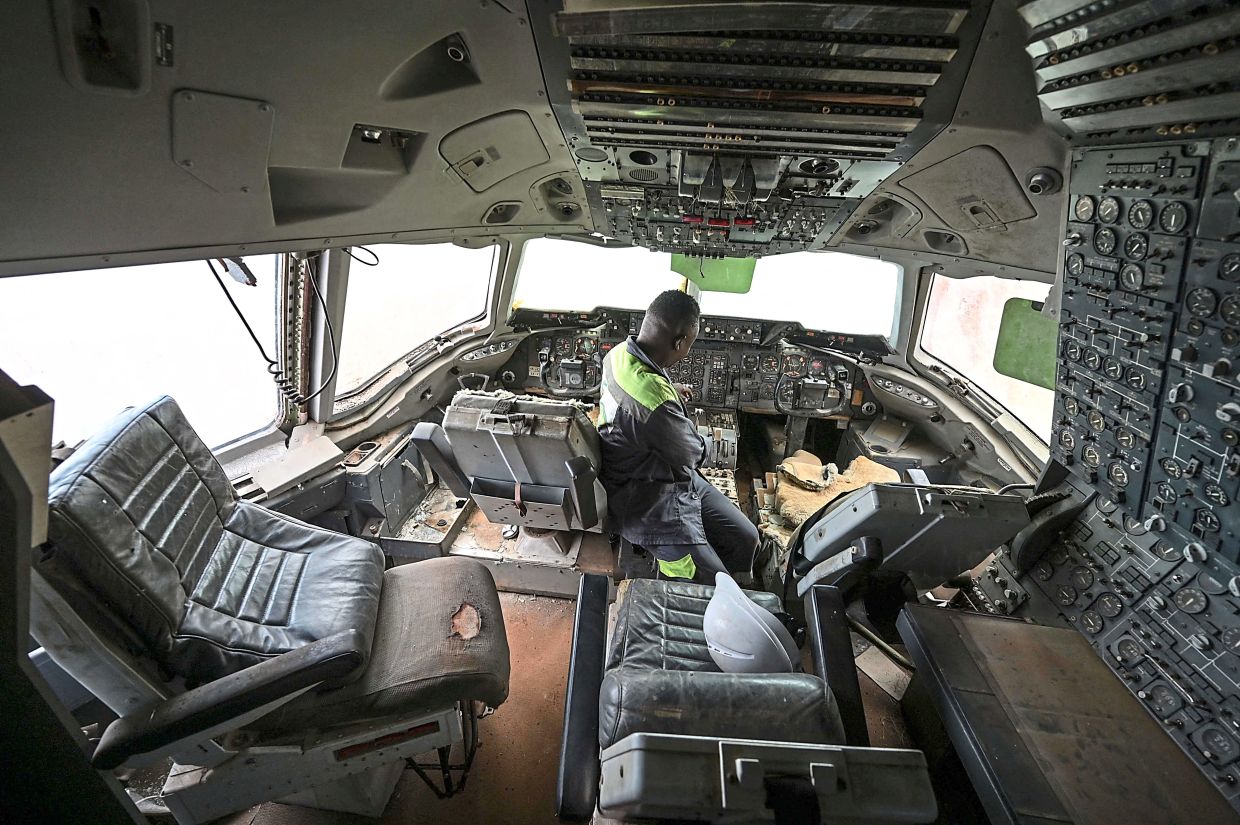 An employee in the wreckage of a cockpit in a DC-10 aircraft.

Eleven disused planes were hauled to the vast site of his construction machinery rental company – it also houses the facilities of Ivoire Academie, a third division football club of which Alibhai is the president.

Eight of the aircraft are lined up on an 800m airstrip that leads to the placid lagoon.

“Some planes had to be cut into two or three sections to be able to transport them without blocking the whole road,” he recalled.

Born in Dar es Salaam on Tanzania’s Indian Ocean seaboard in the early 1950s, Aziz Alibhai came to Ivory Coast, on the other side of the continent, in 1968. He never left.

Today, he wants to give the discarded aircraft a second lease on life – a passion that he shares with curious visitors.

“I would like to turn them into conference rooms, a restaurant and – why not? – luxury bedrooms,” he said.

“We can modify them easily – the cabins have insulation and with a little air conditioning it could work very well,” he argued.

Rain, dust and sunshine have worn away much of the planes’ original paintwork, and in the DC-10’s luggage racks a few birds have made their nest.

Inscriptions in the Greek alphabet state that the plane once belonged to a company called Electra Airlines.

Inside this American-built workhorse, the cockpit seems frozen in the early 2000s, with a thick layer of dust covering the arrays of buttons and switches.

Further on, an Antonov An-12, mainstay of the former Soviet Union as a military transport and cargo hauler for almost three decades, remains sliced in two parts, which border a football field.

Alibhai envisages a terrace connecting the two giant sections, where visitors can have a drink.

Seats have been stripped out of most of the planes and today accommodate spectators on the stands of the Ivoire Academie grounds. Some first-class seats are being used on Alibhai’s terrace, where he invites visitors to have a cocktail.

“We are very much recyclers,” Alibhai laughed, listing things made with salvaged objects in the buildings of his estate, such as sheds constructed with truck chassis and stairs made from bulldozer parts.

He has further ambitions for his aircraft.

“Displaying the aircraft components in a kind of museum, showing the planes’ most sophisticated parts – that is also something I’d like to do,” he dreams. – AFP