Some people prefer a busy airport like this, than an empty one like how most airports are today. — Pixabay

Airports, large or small, are sometimes referred to as glorified “bus stops”.

After all, many of us have had our fair share of horror stories at the airport. From navigating through a busy terminal and queuing up for hours at various checkpoints, to paying for “airport” price food and drinks... and not forgetting, having to handle your various bags in the washroom as a solo traveller.

You get the idea.

Most people would say that they can’t really relax until they have boarded the plane.

But for airport enthusiasts, the feeling is not mutual. Event and sales executive Shasheerekha Gunneseharan, 30, is one such airport enthusiast.

“For someone who loves travelling like me, it is hard to ‘hate’ the airports. I love the satisfaction and excitement of being there, ” she said, adding that she enjoys the crowd and always find interesting things to do at airports.

When she turned 21, Shasheerekha flew for the first time from Penang to her hometown in Johor for a birthday celebration with family members.

“I still remember how bright the blue sky was on the day I first took a flight, ” she said. That trip sparked Shasheerekha’s love for airports, especially the Penang International Airport.Instead of just sitting in the terminal for hours doing nothing, Shasheerekha spends her time taking photographs of the planes.

Airports usually provide many photo opportunities for shutterbugs and plane spotters as there are many things that take place on the tarmac. For example, you can take pictures of baggage handlers “feeding” the plane, or of engineers checking every part of the plane to make sure things are in working order.

For Shasheerekha, who loves photography, time goes by much quicker at the airport when they have their cameras with them. She believes that the photos she takes will remind her of her holidays, especially at a time like now when travel is not allowed.

Jerry Tan, a Malaysian student pursuing his tertiary education in Britain, said airports are places that allow him to see the world’s interconnections and stunning structures.

“It’s certainly a cool space to go on an adventure. It’s also a space for people-watching, ” said Tan, 23.

“Airports are the criss-crossing points that are full of emotions and feelings served by people from different walks of life – the joy of a family going on a holiday, sharpy-dressed professionals flying internationally for business, the excitement of elderly couples flying to see their new grandchild in another country or even the sorrow of separation, ” he said. 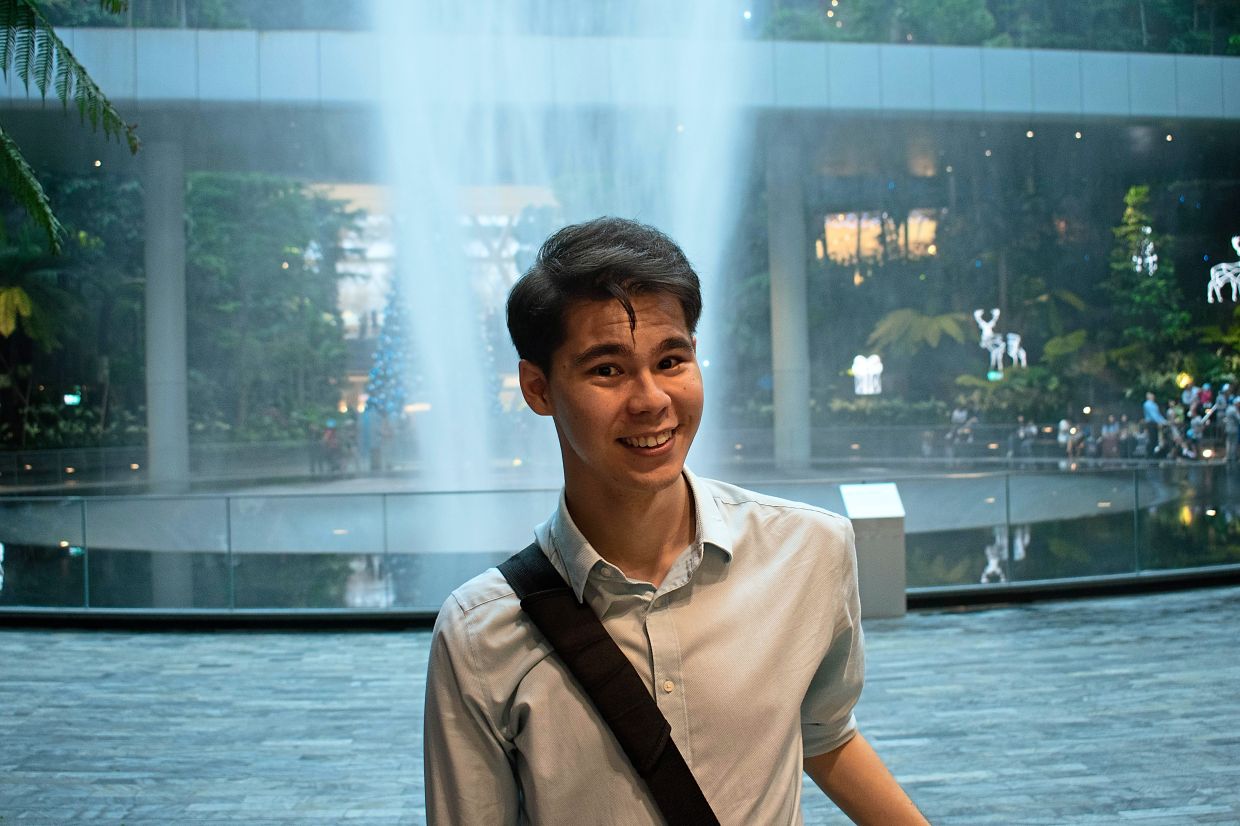 Tan loves checking out the architectural designs of an airport, among other things. — JERRY TAN

The plethora of human emotions aside, airports are also cherished by some for its grand architecture.

In countries with just one main international airport like Singapore, the airport frames vivid impressions.

Malaysian nurse Sia Yu Xin, 25, who works in Singapore, always feels astonished when she is at the Changi Airport – especially with the recent addition of the Jewel Changi complex.

“Changi Airport is truly heavenly, and I remember being blown away the moment I stepped into it, ” she said.

She shared that the man-made waterfall at Jewel Changi is amazing too. “It feels like I am in the Amazon, ” said Sia, who is from Ipoh, Perak. She also loves the Senai International Airport in Johor.

Tan, who was born in Kuching, Sarawak is also impressed with Changi Airport.

“There is no place like home but I cannot deny that Changi is my favourite international airport for its stunning views, ” he said.

Tan even has praise for the meal options offered at Jewel Changi, and the lush gardens you find there.

It is no surprise that many travellers enjoy shopping at airports. The duty-free shopping area is a retail wonderland, featuring a range of products including cosmetics, leather goods, fashion accessories, alcohol and chocolates.

Tan said he usually shops for duty-free chocolates and perfumes at airports. 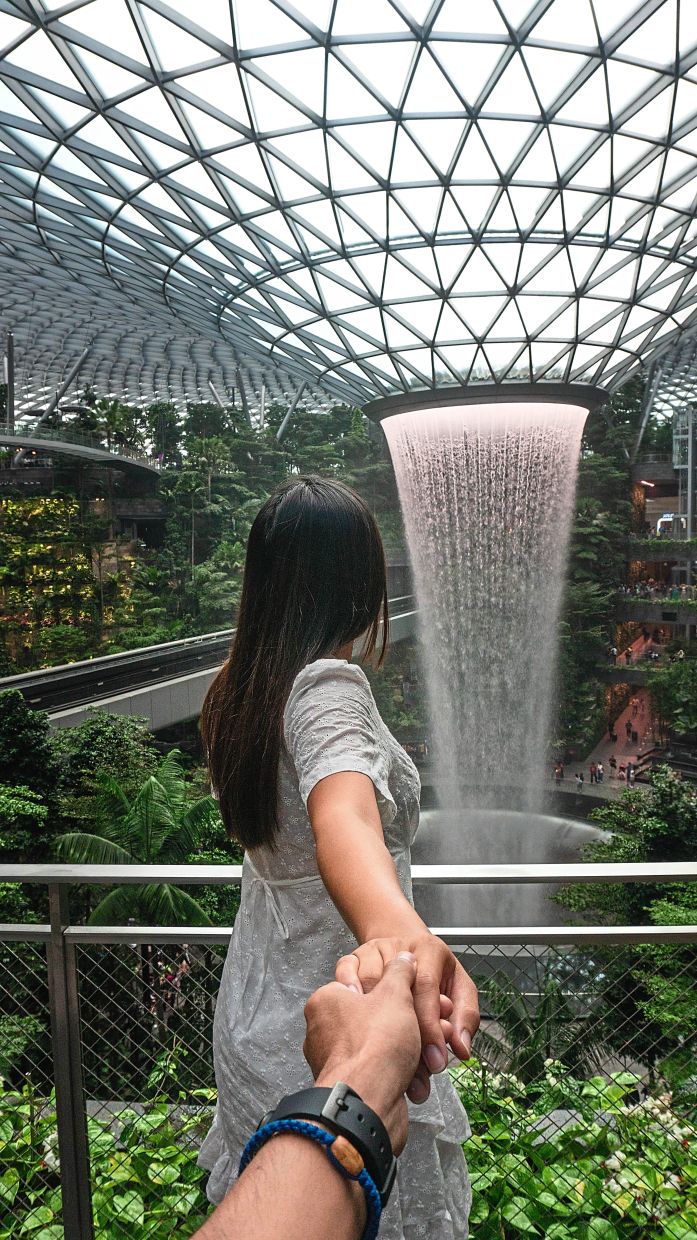 Sia lists Changi Airport as one of her favourite international airports. — SIA YU XIN“I will usually use ‘travelling’ as an excuse to treat myself to these luxuries, and the extra time waiting for a flight or in transit gives plenty of opportunity to window shop or buy gifts for family and friends.

“I’ve don’t know anyone who doesn’t enjoy a box of decadent Belgian chocolates picked up at the airport!” he said.

While duty-free shops may sell items at a lower price compared to shopping malls, items could cost more in some cases. Travellers are encouraged to make comparisons before making a purchase.

“However, I have found many good deals in duty-free stores before, especially when passing through the Kuala Lumpur International Airport. It is just a matter of hunting for the best offer, ” Tan said.

Today, duty-free shops and some airlines make it easier for passengers to shop at the airport. You can just order items online or buy on site and then pick up your goods at the gate just before boarding.

This allows you to walk around freely at the airport without the hassle of dragging too many shopping bags along.

Just remember to pick up your items as some people do tend to forget!

You also have the option of having your items shipped to your home address, but this would cost you more of course.

The Covid-19 pandemic has certainly changed the travel experience for passengers.

Many airlines now implement strict standard operating procedures to curb the spread of Covid-19. Usually bustling airports like Changi, Heathrow in London and even KLIA now look like mini ghost towns, mostly deserted and with many aircraft grounded.

Shasheerekha said she misses going to the airport, and that she has seen many shops at the airport shut down because of the pandemic.“I can hear the concourse calling me but sadly, now I cannot fly, ” she said, adding that she also misses the friendly faces of airport staff.

Tan, too, thinks that flying is a very different experience these days. He boarded a flight from Malaysia to Britain recently to continue his studies on campus.

“Health standards are higher, people have their masks on everywhere and the airport is not crowded, ” he said. Some airports, like the Suvarnabhumi International Airport in Bangkok, Thailand, are so beautifully designed and furnished. — AUTTHAPORN PRADIDPONG/UnSplash

Tan also applauded the authorities and airport operators for the enhanced measures they have implemented to keep air travel safe.

Sia, meanwhile, said that she will visit the Jewel Changi whenever she misses travelling, either just to window shop or dine with friends. Before the pandemic, she would travel four to five times a year.

“I enjoy walking around the airport but I cannot do that now. Even with the different virtual tours of Changi Airport available, nothing can beat the physical experience. I love the airports for their designs, the ambiance and high technology facilities, ” she said.

She hopes that airports around the world would still take safety and hygiene measures into account, even after the pandemic ends.

Automation, according to her, would reduce human interaction and offer better pathogen protection too.

“Airports should implement machine verification methods instead of human verification as each of us is a potential vector of any deadly virus. With minimal to no physical contact, it solves some of the pandemic issues, ” she said.

Meanwhile, some travellers are hoping that airports will use this time to reinvent themselves.

“If any of the Malaysian airport designs are like Singapore’s Changi Airport where there is a rainforest, a waterfall, and a wide range of shops, I would definitely visit during my free time, ” Shasheerekha said.

Tan thinks airports should use this time for upgrading works.

“Infrastructure maintenance and giving airports some cosmetic touch following our own cultural heritage might be fruitful too in bringing up a fresher look. This might attract more people to visit in the future, ” he noted.

How to reduce plastic usage while on holiday
Hanoi's Instagram hotspot 'Train Street' cautiously reopens�to tourists
The 10 most mesmerising mosques in Malaysia
Elvis death anniversary and recent movie increases tourism at his birthplace
Discover a mystical landscape in Bastei, Germany
Why it's fun to holiday in Kota Kinabalu: From the mountain to the sea
Religious schools help revive the Moroccan city of Fez
No monkey business on this Malaysian-owned estate in London
How a hotel satisfaction promise has led to more discontent
For some Americans, Europe is the best budget-friendly place to visit this year