There are so many cultural experiences to explore in Langkawi Island. — Filepic

The Langkawi Development Authority (Lada) has taken a different approach to promote cultural tourism on the legendary island in Kedah through micro-documentary videos.

Lada chief executive officer Dr Hezri Adnan said the production of the micro-documentaries was based on the concept of storytelling by individuals or well-known figures who were directly involved in the development of the Langkawi tourism industry.

“There are 10 micro-documentary videos produced, each with a duration of between five and six minutes. For example, we show jikey which is a famous traditional Malay form of theatre in the northern states, but more interestingly in Langkawi, jikey has aspects of multiculturalism, showcasing Malay, Chinese and Thai cultures, ” he said.

He said this to reporters after the launching ceremony of the Langkawi Micro-Documentary Videos at Laman Padi recently.

The event was officiated by Kedah Menteri Besar Muham-mad Sanusi Md Nor.

Hezri said Lada is aware that the island receives a large number of tourists but it is more focused on existing attractions, even though in international tourist locations such as in Bali, Indonesia or Phuket, Thailand cultural tourism provides a good income to locals.

“In Langkawi, we do not have enough to highlight cultural products that can be an attraction to tourists, so on that basis, we feel the need to revisit the Langkawi cultural DNA that can go on to become future attractions.

“Actually, we may not find local practices very attractive but foreign tourists or even those from Kuala Lumpur and other big cities may be drawn to them, and these will become traditions on this island, ” he said.

Hezri said, so far, three out of the 10 micro-documentary videos – Pandai Kayu (featuring traditional Malay architecture in Langkawi), Beras Terbakar (set in a historic location) and Gua Pinang – have been uploaded on Lada’s social networking site and have received good response. – Bernama 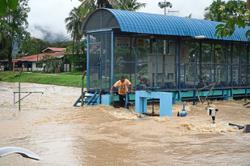 How are tourism workers coping with no tourists in Malaysia? Premium
Tourism Ministry reveals recovery plans for pandemic-hit travel sector
Covid-19 turns Japanese theme park into an office for teleworkers
What you need to do to have an amazing adventure
The perks of being a constant bystander at marathons
Malaysians can do a 'running holiday' at these international marathons
Malaysian runners share the joy of running and seeing the world Premium
Hello Kitty asks fans to sponsor anniversary party amid Covid-19
A fun affair in Guangzhou for Malaysian family
Malaysian tourist guides take on security guard, e-hailing jobs amid Covid-19