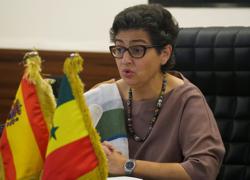 Towards the end of 2018, I had decided to commemorate my 65th birthday in May 2019 by walking 320km from Oviedo to Santiago de Compostela, Spain, within 10 days. The route, known as the Camino Primitivo, lies in northern Spain traversing the provinces of Asturias and Galicia.

My travelling pack consisted of a first aid kit, fast setting epoxy (for emergency shoe repairs), poncho, a 1.5l water bottle, some string, gloves and hiking poles. In total, my bag weighed just over 3kg. My bigger bag was transported from one hotel to another, which I had pre-booked.

Walking in Spain in May was very pleasant. It was cool in the mornings, around 8°C, and I was fortunate that it only rained once. Even then it was just a light drizzle. The days were long, too – daylight was from 7am to about 9.30pm!

The green countryside with farm animals along the way was such a refreshing scene for me to see. You can hear cow bells ringing and sheep bleating on the paths. Beautiful wild flowers adorned the track.

I managed to cover about 68km within the first two days. I walked about nine hours a day, resting for meals or a breather every now and then.

On the third day I took it “easy” and only did 27km; I arrived at my hotel in Polla Allende at 3pm which was two hours earlier than my usual cut-off time. I took the chance to do a bit of laundry and shopped at the supermarket nearby.

In the evening, I was invited to join the other pilgrims whom I had met on the way.

To my surprise, four of the seven new acquaintances had visited Malaysia before. There was Kurt from Belgium, Pierre and his daughter Kathya from France, and Catherina from Gemany. Nola, from Australia, was the oldest among us at 80 years old. 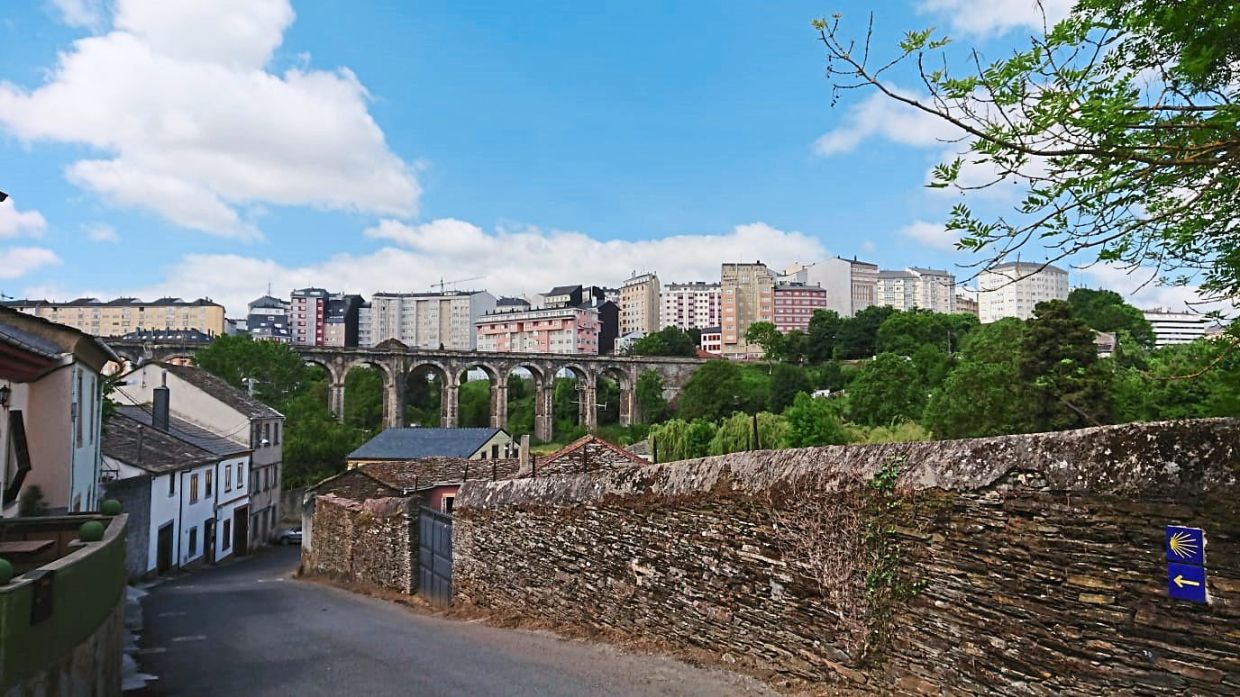 Lugo is a beautiful city situated on a hill.

The next day, I felt confident enough to walk 40km. I started at 7.45am, and the first stretch of the journey was almost continuously uphill. It took me almost three hours to finish that stretch, which was under 10km. The peak was at Poerto Palo, 594m above the starting point.

The lowest elevation of the day was actually a dam, and I had to walk through a burnt forest to get there.

The last stretch to my final destination of the day, Grandas de Salime, was also uphill (about 7km) although a lot easier to do.

There are many interesting structures along the way such as private chapels, dovecotes or houses for pigeons/doves, horreo for corn and grain storage and more. Many of the small towns had cemeteries with burial vaults, some of which were as high as five storeys tall.

Most of the time, I had to walk through farmlands, especially when I’m passing through the smaller towns. There are many large farm dogs here but they are tethered so I didn’t worry much. Plus, the locals were friendly, wishing peregrinos (or pilgrims) buen camino, which literally translates to “good road” in Spanish.

It is said that each year, about 9,000 pilgrims walk the Camino Primitivo route.

When walking this far, the weakest parts of your body are the feet and they will eventually let you down unless you take good care to avoid blisters. Hiking boots made from leather need to be properly worn in prior to your journey to make them comfortable.

Plasters are a must, and plenty of them. Gel toe caps are very useful for protection, while trimming and shaping toenails are a must for anyone who wishes to walk very long distances. 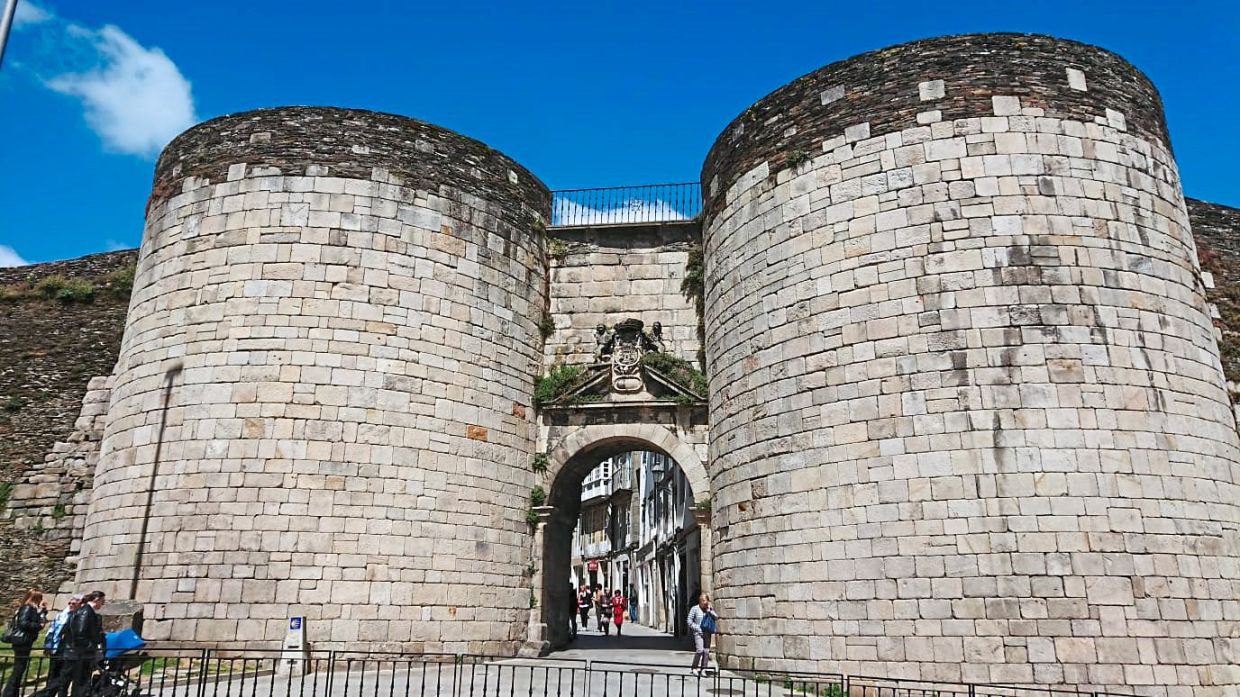 The writer had some time to explore the small towns and cities along the way.

On the sixth day, I learned just how important it was to take care of my belongings. I dropped my phone after taking pictures of a beautiful cemetery, and it became unserviceable! Maybe the spirits were disturbed...

On the seventh day I reached Lugo, a beautiful city on a hill. I was now only three days from completing my walk, and cover a distance of 102km.

I bought my dinner from the deli at the supermarket: meatballs in tomato sauce, stewed pigs ears and rice.

My only luxury accommodation was at the end of the eighth day at Casa Camiño a Casa de Aldea. It was a beautiful complex of ancient stone buildings that date back about 800 years, according to locals. I was the only guest that evening. The place would be a lovely place to have a family holiday or a retreat with friends.

Good things finally come an end. I reached Santiago de Compostela early in the evening, and made my way to the cathedral. I also found the place where my certificate would be issued.

I visited Iglesia de San Agustín-Xesuitas (Church of St Augustin) and a few others on St Augustin Road. They were all just so beautiful.

Santiago de Compostela has a market for fresh vegetables, meat and seafood. It is next to a bar which will cook the produce for you for a price. I sat at a table occupied by two Japanese men who had completed their walk; one of them spoke English. They knew of Tun Dr Mahathir Mohamad and spoke fondly of him.

The place also has plenty of good quality leather products. I bought my wife a beautiful clutch, and some other souvenirs for my children.

I really loved my pilgrimage and I would want to do it again on my 70th birthday. Only this time, I would like my wife to join me, even if she only walks half the way (you can walk part of the journey each day and then take the bus to reach your accommodation). I have four more years to keep fit and convince my wife!

Malaysian traveller finds love in the air in Santorini

What languages are the easiest to learn while stuck at home?
5 popular restaurants Malaysian foodies can visit in the future
Over-the-top gardens are the new vacation spots
MCO 2.0: Hotels in Malaysia feel neglected, being 'left to collapse'
MCO 2.0: Tourist guides need more than RM500 assistance to sustain livelihood
MCO: Malaysians feel the travel ban blues, but happy to avoid nosy relatives
Let’s get beefed up for wagyu, the meat that melts in your mouth
Are travellers ready to brave 19 hours (and more) in a plane?
KL to be transformed into street art capital
Gordon Ramsay to open restaurant in Malaysia, netizens want the 'Idiot Sandwich'