I will always remember Jakarta’s Kota Tua, a popular destination for tourists and locals in Indonesia. There were just so many things to learn and see there, like the historical buildings that are remnants of the Dutch colonial rule.

Kota Tua is known for its museums, many of which are within walking distance of each other. But for me, it wasn’t just the museums that were worth checking out as I was also interested in the Dutch-themed structures. It made me feel like I was in another city altogether.

The first museum that I went to was the Puppet Museum. Like Malaysia, Indonesia is also very well known for its shadow puppets. There are a myriad of puppets on display there from various parts of the world including China, India and Cambodia. The puppets are either made from wood, leather, coconut leaves or cloth and some were used to perform excerpts from the Ramayana and the Mahabharata.

While I could not follow the stories from the two epics, I loved seeing just how intricate the designs of the puppets were.

The stone-carved feet of King Purnawarman who ruled the Tarumanagara Kingdom on display at the Jakarta History Museum.

After that, I headed to the Jakarta History Museum, also known as the Batavia Museum. (Jakarta was once known as Batavia during the Dutch rule.) It houses a number of important historical artefacts. The museum used to be a city hall during the Dutch settlement period, so the architecture was very interesting. There were some beautiful murals painted on the interior walls around the building. As I walked through the galleries, I learned about some of the different cultures and kingdoms that used to be there like the Tarumanagara Kingdom (which existed in the fifth century).

Among the artefacts that fascinated me was the Ciaruteun inscription that was found on the banks of Ciaruteun streams. The stone has a carved print of King Purnawarman’s feet – he who ruled Tarumanagara Kingdom. There was a display of ancient bank notes too.

Going from one museum to another can be tiring so I stopped at Cafe Batavia near one of the museums to rest and eat. Locals tell me that it is one of the oldest cafes in Jakarta and that it used to be an art gallery built by a French-man. The food was a little expensive but the decor was wonderful.

Touring the museums and marvelling at the architectural styles may not be everyone’s idea of an amazing holiday but to me it was perfect.

I enjoyed my time learning about new things there, especially of the Dutch influence in Jakarta. If you want to immerse yourself in a historical rich place while you’re in Jakarta, then do consider visiting Kota Tua. 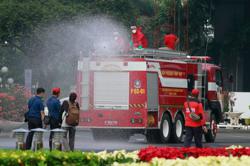