“I want to dress more celebrities,” Khoon Hooi declares when asked about the number of international stars seen wearing his creations on various red carpets across the globe. It is all part of his goal of taking his namesake label and making it a global brand.

“We aren’t in a fashion capital,” he explains. “And if you want to do fashion, you need more exposure. And only Hollywood can give you that exposure, which will then flow back to your brand.”

That his name has gone international may seem a huge accomplishment given the fact Khoon Hooi frequently talks about his modest background, growing up in a small town. Back then, he knew he wanted to work in fashion. His early introduction to the industry had come from magazines, the pages of which, showcased the designs of veteran designer Alvin Tang. It was only then that he learnt the concept of a fashion designer and was sure that it was what he wanted to be.

He had the talent as he was good in art but more than that, he had the vision of owning his own brand. 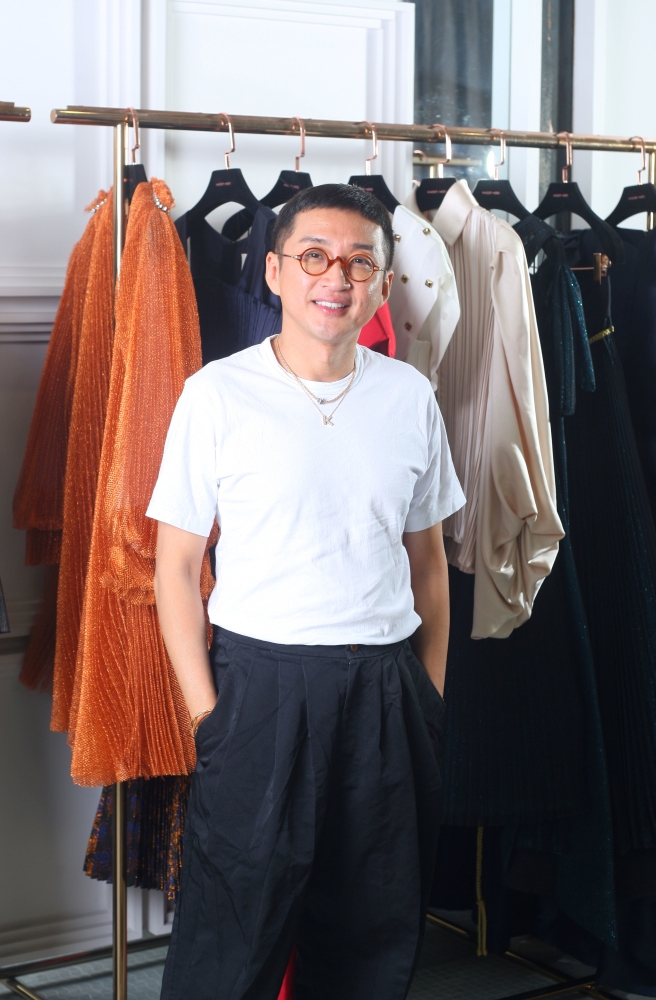 For Khoon Hooi, each collection showcases up to 55 pieces, providing a range of designs, all of which have elements of occasion wear, even the separates. That is maintaining the DNA of the Khoon Hooi brand. — AZMAN GHANI/The Star“I always knew that it was what I wanted and so I worked towards achieving it,” he said. After graduating from the Malaysian Institute of Art in the early 90s, he worked at a manufacturer that produced collections for small boutiques.

That provided the impetus for him to venture out on his own. And the opportunity arose when he asked to have a counter at Isetan. From there, the label grew, moving from different locations to its current space at APW in Kuala Lumpur.

Over the years, Khoon Hooi, the label developed a strong following who frequently complimented his designs. And after several outings at New York and Paris fashion weeks, he came to the realisation that his designs were on par with other international labels.

“I felt that the collections were good but it was just that the exposure was not there,” he says. “We realised that we have to engage in a lot of PR activity.”

Since then, the brand has engaged with various PRs and stylists who then adorn celebrities with his designs for the red carpet. One of the brand’s big moments was when Katy Perry wore Khoon Hooi for the annual 101.3 KDWB’s 2019 Jingle Ball holiday concert in 2019. In 2020, the actress Karen Pittman also wore Khoon Hooi to the Golden Globes. And recently in July, Kim Joo-ryoung, who appeared in Squid Game, wore Khoon Hooi to the 1st Blue Dragon Series Awards in Incheon.

The process, of getting there, however, is not easy. Celebrities in Hollywood typically receive a host of options before deciding what to wear. Often, the team only discovers who opted for the brand when the celebrity appears on the red track. Furthermore, plans were hampered over the past two years because of the pandemic. But now it looks like everything is back on track.

The initial years of trying to expand beyond Malaysia were also challenging. The designer had little knowledge about international markets and therefore, he had to learn everything from scratch.

“I learnt the hardest way,” he says. “I discovered that every country has their own fashion sense and so I had to decide which direction to take.”

This also was an evolution for him as in his early days, he pretty much followed his own instincts as a designer. Then, he attempted to venture into New York and thus, adopted a contemporary and edgy approach to his designs.

But he found that it didn’t resonate with his local consumers. Soon, he found a market in the Middle-East where the demand for occasion is great.

“The Middle East is a big market for Khoon Hooi,” he says. “The fabrication, the colours and the designs. The culture is more is more.”

Now as the label has gone past two decades, the plan is to continue expanding abroad. In September, he will be heading to Doha for a trunk show. He also hopes to try the American market once again but this time, in Texas where the demand for statement pieces is strong.

While the brand has entered the significant 21 years, Khoon Hooi stresses that he has never really focused on timelines.

“I just do the best that I can do and dream what I love to dream and see how far the brand can go,” he says. Kim Joo-ryoung, who appeared in Squid Game, wore Khoon Hooi to the 1st Blue Dragon Series Awards in Incheon in July. — Spring Global/InstagramTo younger designers, he advises that it is important to know your strengths as a designer and develop it. And if one has to produce two collections a year, it will provide ample opportunity to discover what one likes to create.

However, he stresses that it is also important to find a balance between what one likes to do as well as keeping up with the latest trends. Having to work six months ahead also means having to anticipate what customers want.

For Khoon Hooi, each collection showcases up to 55 pieces, providing a range of designs, all of which have elements of occasion wear, even the separates. That is maintaining the DNA of the Khoon Hooi brand.

“If you look at Japanese brands, all the pants have little pocket inside where you can keep your keys or coins, I really appreciate little details like that because it shows that you have thought about it in the design,” he says.

For a Khoon Hooi dress, this is reflected in the “hanging” appeal of the garment. All the dresses can be easily hung on the rack and that’s one of the thing boutiques love about the brand. It doesn’t drop when you touch it.

“If people are scared to touch and feel the dresses, that is a lost opportunity,” he explains. “Also, the hanging appearance is important. It has to appear 3D or 4D.”

Moving forward, Khoon Hooi remains focused on what he wants for the label that bears his name. In Malaysia, KL is the hub and thus, he is comfortable with having his one outlet at APW. He is, however, in the process of moving to a double storey lot at the same location, which will house a VIP section on the second floor for his many loyal customers.

He is also delegating a lot of operational matters to others so he can focus on the creative process, which is what he loves most and to remain steadfast in his goal of making Khoon Hooi an international brand. This, despite the fact that the brand is already in a very comfortable position in Malaysia, having garnered a loyal following over the years.

“It really depends on what you want for your brand or yourself,” he explains. “Financial stability is important but that has become secondary for me. You can have a very comfortable career in Malaysia but is that what you want? I want more than that. I want to explore whether the brand can be accepted by international buyers and how they judge the brand.”

Is the athleisure trend dead? No, it's actually undergoing a resurgence