November 14, 2018 file photo of Japanese-French fashion designer Kenzo Takada posing during a photo session in Paris. Kenzo Takada has died at the age of 81, from Covid-19. Photo: AFP

Kenzo Takada, the iconic French-Japanese fashion designer famed for his jungle-infused designs and free-spirited aesthetic that channeled global travel, has died. He was 81.

The family said in a statement to French media Sunday that Takada died from complications from Covid-19 in a hospital in Neuilly-sur-Seine, near Paris.

A public relations officer for Kenzo's brand confirmed that Takada died, but didn't give a cause of death.

"It is with immense sadness that Kenzo has learned of the passing of our founder, ” the fashion house said in a statement. "For half a century, Mr. Takada has been an emblematic personality in the fashion industry - always infusing creativity and colour into the world.”

Takada's death came at the tail end of Paris Fashion Week, whose nine-day calendar is undertaking an unusual fashion season for Spring/Summer 2021 because of the coronavirus pandemic. It was only days ago that the Kenzo fashion house unveiled its bee-themed collection here. 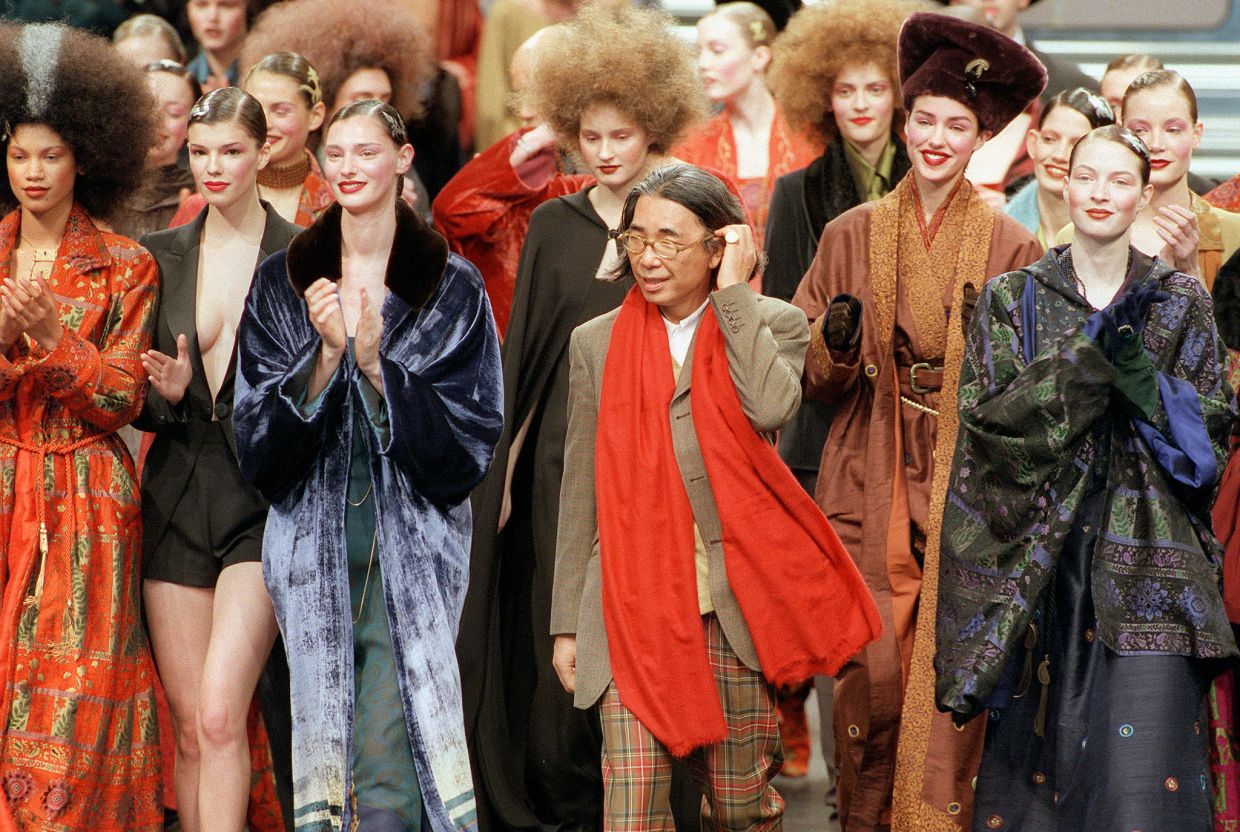 Though Takada had been retired from his house since 1999 to pursue a career in art, Kenzo remains one of the most respected fixtures of high Paris fashion. Since 1993, the Kenzo brand has been owned by the French luxury goods company LVMH.

Kenzo's styles used bold colour, clashing prints and were inspired by travels all over the world. "Kenzo Takada has, from the 1970s, infused into fashion a tone of poetic lightness and sweet freedom which inspired many designers after him," said Bernard Arnault, chairman and chief executive of LVMH. 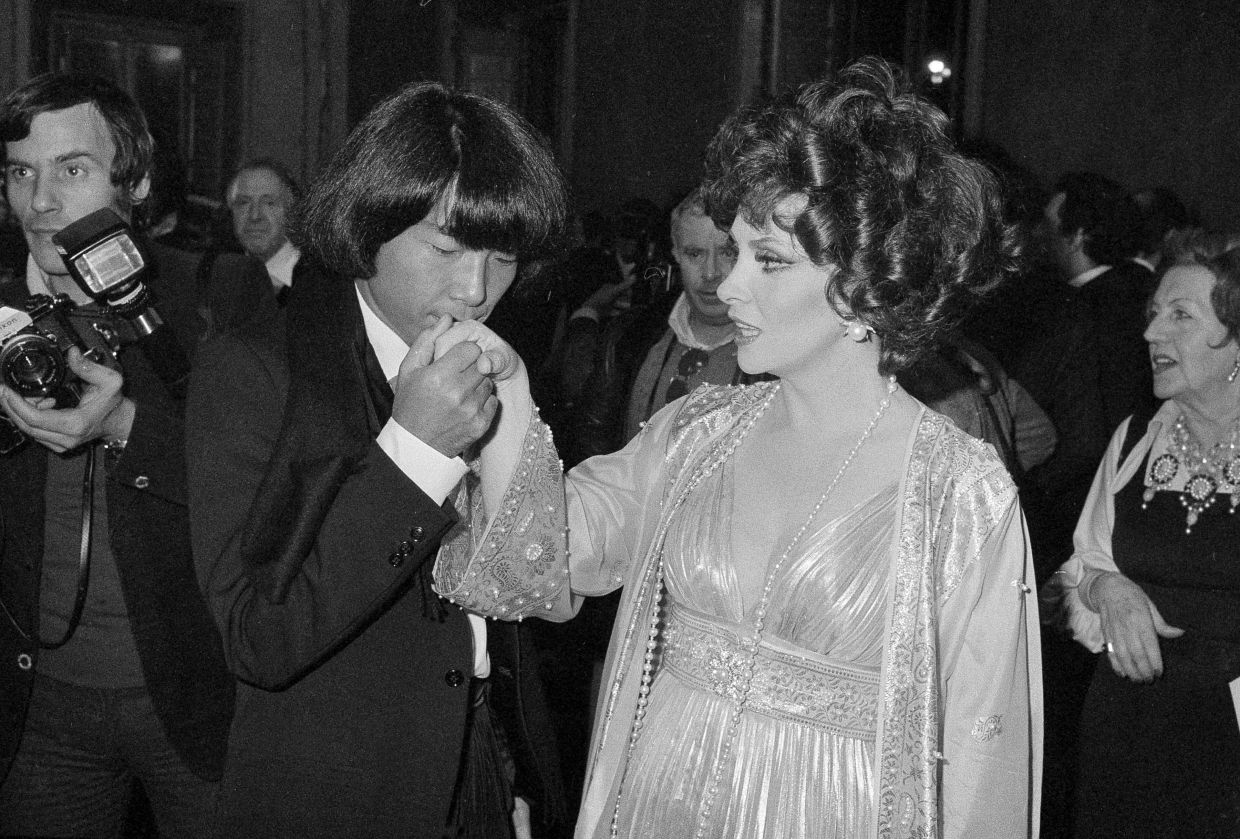 Dec 16, 1977 file photo of designer Kenzo Takada kisses the hand of Italian actress Gina Lollobrigida after she awarded him as one of the ten most elegant men in the world in Rome, Italy. Photo: AP

Takada was born on Feb. 27,1939, in Himeji, in the Hyogo Prefecture in Japan to hoteliers, but after reading his sisters’ fashion magazines his love of fashion began. Studying at the Bunka College of Fashion in Tokyo, Kenzo Takada had a brief stint working in Japan, before relocating to Paris in 1965, to work as a freelance designer.

In Paris, he took over a boutique in 1970 which served crystallised his future ready-to-wear aesthetic, and was inspired in its decoration by the jungle scenes of painter Henri Rousseau, which he merged with Asian styles. It became influential.

But it was lowly beginnings: Takada’s first collection at the store called was made entirely out of cotton because he had little money. But the clothes spoke for themselves and a model of his was put on the cover of Elle magazine. 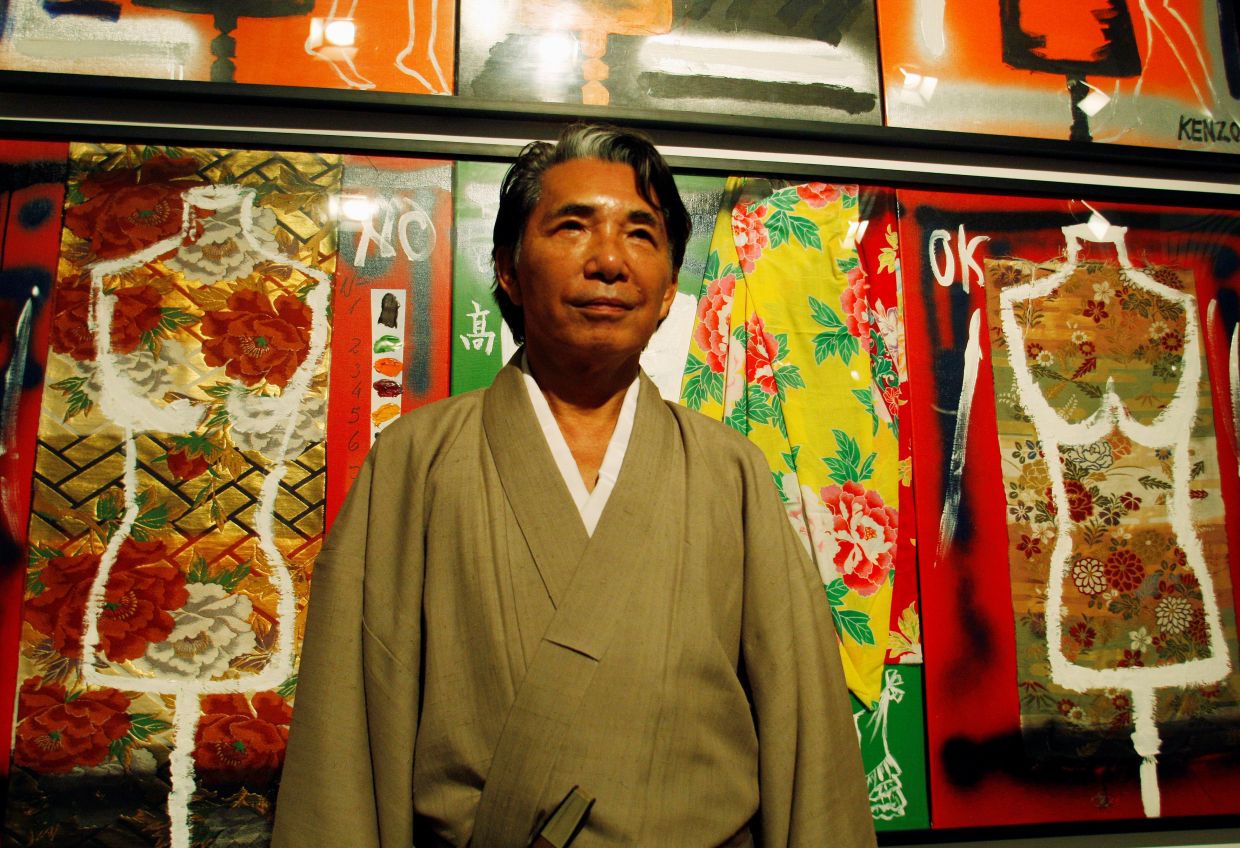 April 7, 2009 file photo of Kenzo Takada in front of his works at an art gallery in Buenos Aires. Photo: Reuters

A short time after, pioneering shoulder forms, large armholes, dungarees, smock tent dresses, innovative shoulder shapes, and his store was featured in US Vogue. Kenzo showed collections in New York and Tokyo in 1971.

Yves Saint Laurent was an important inspiration, in his work, Takada has said. Takada shared Saint Laurent’s penchant for theatrics. in 1978 and 1979, he showed in a circus tent, and it featured himself riding an elephant, and performers rode horses wearing see-through uniforms.

Takada’s love of travel and use of ethnic influences were strong features in his three decades atop his house. His contribution to style was significant. He championed a youthful aesthetic and unstructured form, and did away with zippers to liberate silhouettes. His signatures were of wider sleeves and arm holes, that harked to historic styles in his home continent of Asia. – AP 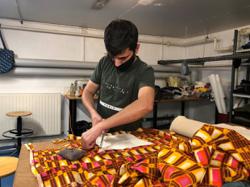 Refugees in Paris with an eye on fashion and a colourful story to tell
Seasonless or not, fashion trends are now reflecting our changed lifestyle Premium
Grammy-winning DJ Diplo puts his own spin on a well-recognised footwear
Fashion in the fast lane? Luxury carmaker launches 'couture' collection
Finding his path: The other side of Datuk Seri Bernard Chandran Premium
The bucket hat was once thought of as fashionably uncool, not anymore
Fashionable Fathers Day gifts from Malaysian brands to keep dad happy
Style Watch: Fashion designer Izrin Ismail on clothes that make a statement
How political can fashion get? Jill Biden offers 'love' with statement jacket
Documentary commissioned by Rolex explores the need for ocean conservation