Anjanaa developed an interest in memorising flags from her travels to a few Asean countries before the pandemic. Photos: Shiyamala Amos

A Year Two student from SK Seri Selangor in Subang Jaya, Selangor has added not one, but two feathers to her cap by holding two world records for identifying over 200 country flags in under five minutes.

"I am so excited and honoured to obtain this double recognition. It will certainly encourage me to do better in the future," said Anjanaa in an email interview recently. 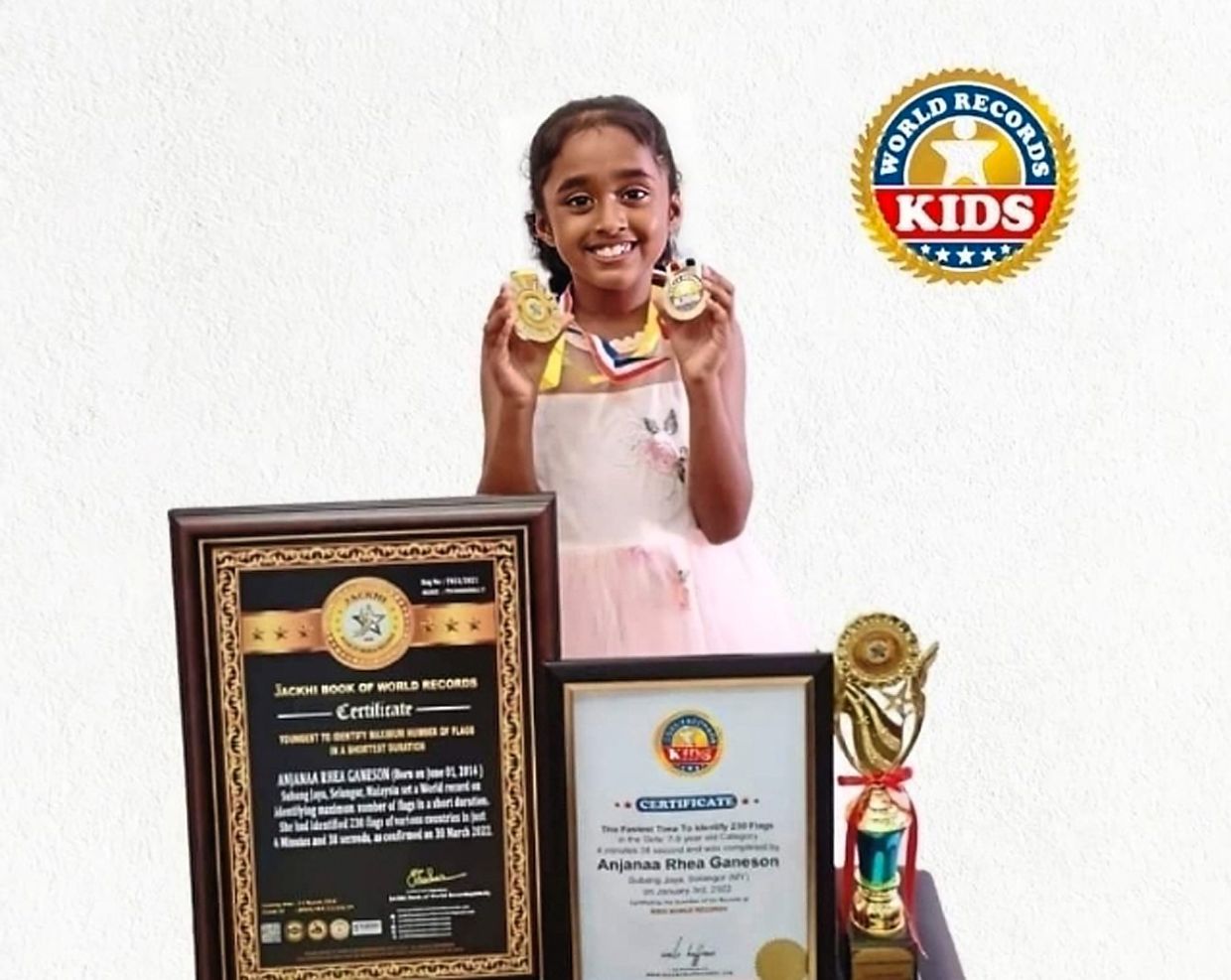 Anjanaa earned the KWR, a Canada-based online portal highlighting talented children aged four to 16, under the girls (seven to nine years old) category. JBWR, based in Tamil Nadu, India, prides itself in uncovering the hidden talents of people around the world.

Eight-year-old Anjanaa completed the task virtually and obtained the KWR and JBWR in January and March respectively.

"Before the pandemic, my parents and I travelled to many countries including Indonesia, Cambodia and India. Over the years, I have developed an interest in knowing more about the flags of different states and countries.

"I especially like the attractive colours and symbols of each flag. That inspired me to learn and know about the flags of all the countries in the world," said Anjanaa, who wants to be a veterinarian.

She added that she's been able to recite 195 national flags and the countries' capital cities since she was six.

"It happened during the movement control order. During the stay-at-home period, my parents created fun activities for me. "One of them was memorising flags. It takes discipline and lots of practice to reach a record time," said Anjanaa. Next month, Anjanaa will be representing Malaysia at the Asia Pacific International Arts Festival Music and Talent Competition 2022.

"During the movement control order, Anjanaa and I would play flag memorising games, where I'd get her to identify flags from different countries worldwide. I'm surprised how she managed to retain the information based on the colours, logo and uniqueness," said the homemaker.

Shiyamala said the secret to Anjanaa's success is reducing her screen time.

"To ensure she has more time for educational games and other activities, we seldom allow Anjanaa to spend much time on gadgets or social media. Instead of tech devices, I encourage her to read and engage in board games and arts and craft activities.

"My husband and I are proud that our daughter has achieved international records. The two awards are both an encouragement and achievement in one package. Parents must support their children's educational interests to help build their confidence, abilities and personal development.

"Currently, Anjanaa is working hard to improve her timing to break more world records. Next month, she will be representing Malaysia at the Asia Pacific International Arts Festival Music and Talent Competition 2022.

Autistic Malaysian artist co-authors children's book with his own illustrations