Lord of the plants: How a death metal eco-baron rewilds Irish estate Plunkett at the grounds of the Dunsany Castle in Dunsany, northwest of Dublin. Photo: Paul Faith/AFP

Randal Plunkett, the 21st Baron of Dunsany, strides out of his Irish castle in a T-shirt bearing the name of death metal band Cannibal Corpse in bloody lettering.

In the distance, a russet-coloured stag appears for a moment, before dissolving into the 300ha of ancestral estate Plunkett has surrendered to the wilderness – almost half of his lands.

"I felt a sort of sense of duty towards the environment here," said Plunkett, perched on a decaying tree trunk sprouting a clutch of mushrooms.

"I'm a caretaker of this estate for this generation and the estate is not just the castle, it's also the land but it's also the environment," the aristocrat told AFP, his mane of shoulder-length hair rippling in the breeze.

The 38-year-old vegan, an unlikely successor to ancestors depicted in sober portraits lining the walls of the grey stone castle, evicted livestock and dismissed lawnmowers to allow nature to take its course.

Now, the results are plain. The ultra rare pine martin has been spotted. Otter and red deer thrive.

Plunkett says a woodpecker has been sighted in the area for the first time in a century.

Beyond the castle crenellations, the lawn is transformed into a swirling morass of 23 species of grass, fizzing with insect life.

Plunkett lends a hand here and there – planting 2,500 trees last year was no small feat – but mostly he is hands-off.

"As I watched it, I began to understand what the land was doing," he said after trudging across a field of knotted undergrowth in a faux leather jacket.

In June, the United Nations said an area the size of China must be rewilded over the next decade.

In October, campaigners marched to Buckingham Palace with a petition signed by 100,000, calling on the British royal family to commit to rewilding their estates before they appeared as ambassadors at the COP26 Glasgow summit.

"I think we need to do a lot more than we're doing. I unfortunately think that it's not going to be done by governments," said Plunkett.

"I started all of this because I wasn't willing to wait anymore," he added. "I'm trying to popularise an idea, which I know for a fact will help."

The benefits of rewilding are manifold. It reverses biodiversity loss, draws carbon down from the atmosphere and can even quash natural disasters.

Some 65% of Ireland – known as the "emerald isle" – is agricultural land, according to 2018 World Bank figures.

Livestock is responsible for around 14% of global greenhouse gas emissions, according to the UN.

For Plunkett, unhitching the perception of the estate as a farming asset has been difficult. He said initially some locals considered him a "moron".

There have been dark moments too.

Plunkett now considers the rewilded estate an "oasis" where deer hunting is off-limits. He patrols the land at dawn to keep unwelcome poachers at bay.

"There were certain threats, there was abuse, there was vandalism. It became very difficult," he recalled.

"It became a war and we're slowly winning it because the truth is this needs to happen for climate change."

Listing the species that have taken up residence on his estate, it is clear Plunkett still has an appetite to fight for his self-described "mini-movement".

"Every year I'm getting at least one animal back," he enthused.

"We're bringing the wild back to Ireland, a place that used to be remembered for being green." – AFP Relaxnews

From Gaziantep to Glasgow, Little Amal delivers seeds of hope to COP26 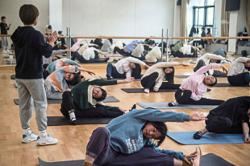