Rahman is a voluntary climate activist of a Bangladeshi youth organisation for raising awareness and a participant of the upcoming COP27 conference. Photos: Munir Uz Zaman/AFP

From Bangladesh to Britain to Nigeria, many young campaigners on the frontlines of the global fight for climate justice now face a new problem: the impact the crisis is having on their mental health.

As thousands of delegates converged at the COP26 summit in Glasgow to discuss ways to tackle the environmental emergency recently, AFP interviewed three youth activists around the world who spoke candidly of their experience of climate anxiety.

In Bangladesh, ranked seventh for countries most affected by extreme weather, activist Sohanur Rahman said he feels overwhelmed with concern over what he sees as a lack of political will to stop the destruction.

"(The) climate crisis is to me a mental stress, trauma and nightmare," says the 24-year-old, who now lives in the town of Barisal and who remembers a 2007 super cyclone that killed thousands of people in the South Asian nation.

"It kills me inside," he says softly, adding that he fears for his parents who live in the village of Nathullabad that was levelled by the cyclone. 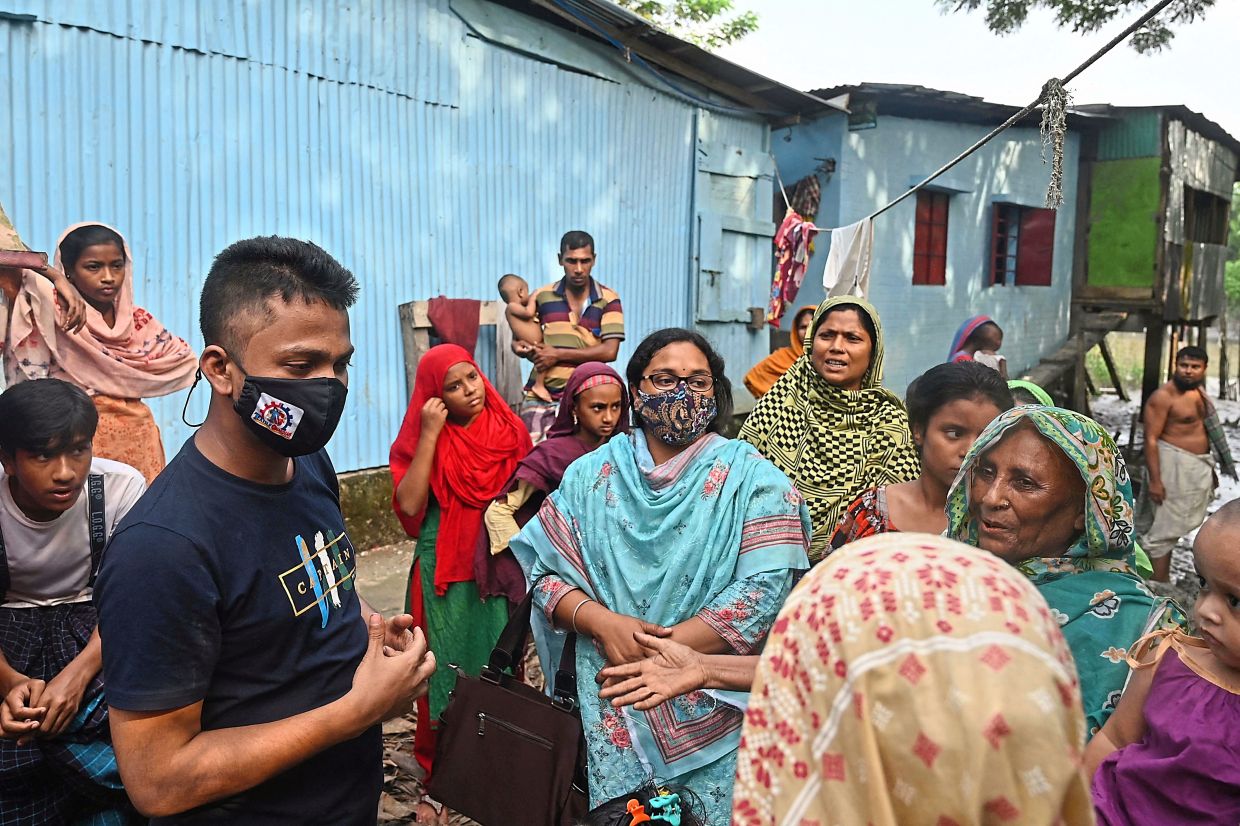 Rahman talking to locals about climate awareness in Barisal, Bangladesh.

The American Psychological Association has described climate or eco-anxiety as a "chronic fear of environmental doom".

As with other forms of anxiety, living with it long-term can impair people's daily ability to function, while exacerbating underlying mental health issues.

Researchers have warned children and young people are particularly vulnerable, as they contemplate a future mired with scorching heatwaves, devastating floods and storms, and rising seas.

A recent report led by researchers at the University of Bath in Britain, surveying 10,000 young people in 10 countries, found that 77% viewed the future as frightening because of climate change.

Around half of the respondents told researchers their fears over environmental change were affecting their daily lives.

"Young people, myself included, feel betrayed by world leaders," the 22-year-old said at a climate protest held ahead of the COP26 summit.

To deal with her anxiety, she campaigns. 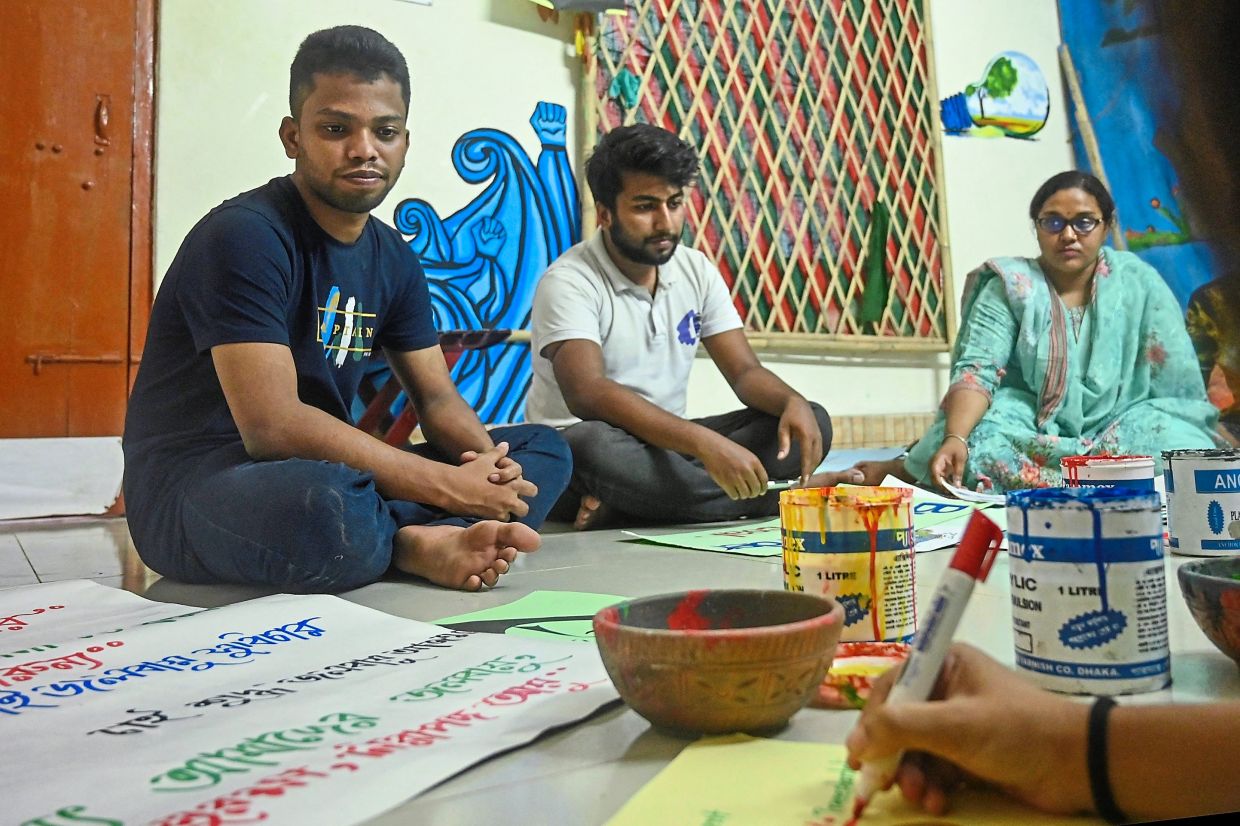 Rahman preparing awareness posters in his office in Barisal, Bangladesh.

"Sometimes it can feel quite hopeless until I am back and organising with my community," she said.

In Johannesburg, clinical psychologist Garret Barnwell showed sympathy and understanding for the young people facing difficult emotions over the crisis.

"It's a reality that children are facing this changing world. They're experiencing fear, anger, hopelessness, helplessness," Barnwell said.

The pressures of climate change also amplify pre-existing social injustices, he said, so younger generations are not only concerned about the environment but also, for example, healthcare access.

Yet despite this, when young people articulate their fears to adults such as teachers, often they find their feelings are "invalidated", Barnwell added.

He welcomed the growing global awareness of climate anxiety, adding that while therapy can be helpful, ultimately what is needed was political action.

'We bear the burden'

But in the eyes of many young activists, that concrete action is lacking.

At the COP26 summit, dozens of countries joined a United States and European Union pledge to cut methane emissions.

The initiative, which experts say could have a powerful short-term impact on global heating, followed an agreement by 100 nations to end deforestation by 2030.

But a simmering diplomatic spat between the United States, China and Russia over their climate action ambitions showed the fragile nature of the talks.

"The previous COP, COP25, really sort of brought out this eco-anxiety I felt," said eco-feminist Jennifer Uchendu, 29, in Lagos.

She said she believed climate anxiety was especially an issue for younger people growing up in nations disproportionately affected by climate change.

"We bear the burden of climate change, even though we contributed the least to it," she said, a frown creasing her face.

Uchendu said that rather than bury her fears, she tries to accept them as valid.

"It's OK to feel overwhelmed," she said. "It's OK to be afraid, scared and even anxious in the face of something so big and so overwhelming." – AFP Relaxnews

Words of comfort for the eco-anxious