Sujana in the process of creating a 3D-printed prosthetics. Photo: Filepic

3D prosthetics maker Sujana Mohd Rejab, 53, hasn’t been resting on his laurels since emerging as one of the 10 winners of the Star Golden Hearts Award in 2019.

Since March last year, the Taiping-based Sujana, better known as Pak Su, has been using his 3D printing machine to produce over 15,000 face shields for frontliners facing the Covid-19 pandemic.

“The machine has enabled me to produce thousands of visors to ensure that our frontliners are well protected.

“I am so proud that some of my face shields have made its way to Australia. This is my contribution to help the community,” said Sujana. 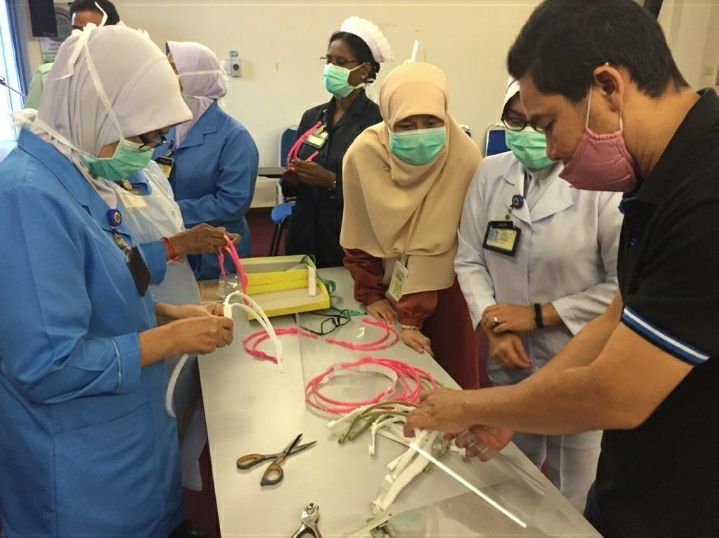 The Star Golden Hearts Award is an annual award by The Star and Yayasan Gamuda that celebrates everyday Malaysian unsung heroes.

Sujana received a trophy and RM5,000. The former teacher also won the Star-Gamuda Inspiration Award, which came with an extra RM50,000.

With the money, the father of six purchased a new 3D printer machine in the hope of making more 3D prosthetics for children born without limbs.

He never expected that the device would be helpful towards a larger part of our community, specifically the frontliners.

“I am grateful for the help from The Star and Yayasan Gamuda. I initially wanted to use the funds for research and development for future 3D prosthetics projects.

“But the Covid-19 pandemic hit us, and it has changed the way we live.

“Thankfully, I’ve received donations from friends and non-governmental organisations which cover the cost to make the visors,” said Sujana, who has also made four prosthetic limbs with his new 3D printer. Muhammad Muqri Mifzal (right) smiles as he wears a new mechanical limb which was crafted by Sujana using a 3D printer.

Sujana first made the news in 2015 when he donated a 3D-printed artificial limb to a primary school student in Penang.

Since then, he has created 3D-printed arms for over 50 children with disabilities from all over the world.

Sujana quit his job as an English teacher at SK Balun Bidai, Kampung Gajah, Perak, in 1997.

The following year, he took up a computer programming course and subsequently worked as a programmer for five years based in Kuala Lumpur.

He then ran a small-scale computer business in Putrajaya for eight years from 2004.

Later, he returned to his hometown and set up MyVista, a company specialising in 3D printers. Sujana’s interest in creating 3D-printed prosthetic devices was borne out of his love for sci-fi movies such as RoboCop and Star Wars.

His curiosity with 3D printing led him to teach himself the programming behind a 3D printer and build one from scratch, with help from the Internet and YouTube documentaries.

“Hopefully, when the Covid-19 situation improves, I can concentrate on making more prosthetic limbs to help people in need.

“Little things can do wonders to help the disabled gain much of their functionality and confidence,” concluded Sujana.