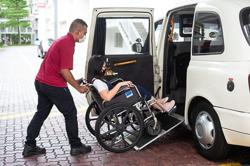 Trained German avionics engineer Ebner sits on his self-designed off-road wheelchair that he has dubbed the Scuttler. Photo: Nicolas Armer/dpa

The armchair – mounted on caterpillar track more often seen on military tanks – is still a little wobbly, but it does the trick, chugging up the streets of Franconian Switzerland and mounting roads so steep that many a driver struggles.

The tank-chair hybrid – an off-road wheelchair – is the creation of Martin Ebner, and he calls it a Scuttler. As far as he knows, it’s one of a kind.

“I want to test it on the ski slopes soon,” he says, ramping up the speed.

Ebner’s goal is to enable people with disabilities and elderly travellers who can’t clamber about in the rocky landscape to enjoy the mountains.

“Most all-terrain wheelchairs just have thick tyres, and that’s not enough, ” Ebner says.

He was chatting to the mayor of his town when the idea for the chair came to him.

“He was telling me that a group had cancelled as one of their members wasn’t so steady on their feet any more, ” he says.

Ebner started looking into which pathways in the popular tourist area in Bavaria were accessible for people in wheelchairs.

In Germany, a website provides an overview of accessible tourism options in the country, listing 2,000 certified choices to pick from. Not all are suitable for wheelchair users, however, with only 150 – spanning museums to country pathways – for those who cannot walk.

According to Dagmar Kuhn of Bavaria’s organisation for people with disabilities, beyond accommodation, restaurants, free-time activities and culture, there are also more and more options in the Alps for trips in the countryside.

“More needs to be done though before places throughout Bavaria are accessible for wheelchair users, ” she says.

Ebner wants tourists to be able to set off spontaneously, and to head out wherever they please. He understands the desire to be out and about only too well.

Now 55, he had a stroke in his mid-40s. “I was paralysed for three days.” He fought to regain his mobility and rediscovered the joys of tinkering, a hobby he learnt from his father, Ebner says.

Ebner, a trained aerospace electronics engineer, spent hours sketching plans and making a wooden model to figure out the height of the shock absorbers. He ordered chains, track, an engine and gears, and had the metal parts lasered.

He also developed a sensor so if the wheelchair leans at a dangerous angle, the driver is alerted, visually and with a sound. The wheelchair now stops before it tips, and can be brought back onto safe terrain by remote control.

After half a year of tinkering, welding and screwing parts together, the chair now moves at a maximum speed of 6km per hour. He is not done, however.

“I’d like to make the suspension even softer and maybe a bit more sporty, ” he says, gazing critically at his creation. Right now, the chair’s battery lasts just under two hours, but Ebner wants it to manage three to four hours.

The kit could be made out of aluminium too, he says, and someone could assemble 90% of it remotely – with the right instructions. 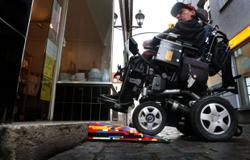