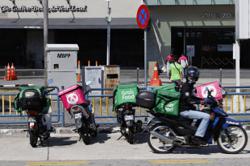 This picture taken on Nov 25, 2020 shows Muhammad Sidek Osman, a Grab food delivery man born disabled due to birth complications, inspecting his modified motorbike as he arrives at a restaurant to meet friends in Gombak. - AFP

Birth complications left him stooped and shorter than average at just 108 centimetres (3.5 feet), making even simple tasks such as climbing stairs a challenge.

But on his modified motorcycle, Sidek becomes a different man -- zipping from restaurants to people's homes delivering food, with business booming as people stay home during the epidemic.

It has not been easy for the 21-year-old, who now works for the transport and delivery app Grab.

Employers repeatedly rejected him for full-time roles due to his disability, leaving him with little other option than to become a self-employed rider.

Sidek looks on the bright side, however, saying he enjoys his job "because you get to interact with other riders and customers".

Riders with disabilities are a rare sight in the Southeast Asian nation, home to an army of bikers tirelessly delivering items ordered on mobile apps.

But life in general is not easy for members of the disabled community as there is little in the way of infrastructure -- such as wheelchair access -- to help them.

The government has not been proactive enough in protecting the rights of those with disabilities, said V. Murugesan, president of the Damai Disabled Person Association of Malaysia.

"The discrimination will cease when the government makes necessary changes," he told AFP.

Sidek said he experienced this first-hand.

After finishing school, employers rejected him for what he described as "normal" jobs -- without giving further details -- forcing him to take on piecemeal work.

During one interview,"they asked for someone tall", he recalled. "They asked me 'can you really work here?'"

Still, Sidek is not one to dwell on the past and is happy to have a steady income during the coronavirus pandemic.

He started working as a delivery rider soon after Malaysia imposed a nationwide lockdown in mid-March, which saw many businesses closed and people confined to their homes for weeks.

"During these times, if you can work, just do whatever is available," he said, adding that he earns up to RM100 (US$25) a day from deliveries.

He is also convinced of the important role delivery riders are playing as Malaysia's outbreak worsens, leaving people reluctant to head out to restaurants and shops.

The country recently re-imposed some restrictions after a surge in coronavirus cases, and has so far reported more than 68,000 infections and over 360 deaths.

"During this lockdown, we riders are front-liners because we take care of people by delivering food so that Covid cases won't rise," he said. 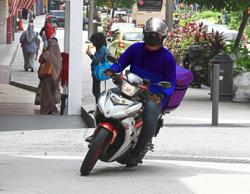