Harfmann with one of his beloved animals, Luna (which means moon), at his donkey sanctuary in Cund, Romania.

Shelters for dogs and cats are common enough, but a donkey sanctuary? That's something else.

For Christian Harfmann, 54, his donkey sanctuary happened quite organically.

Originally from Austria, he moved to Romania 12 years ago and settled in the village of Cund, in Mures county.

About five years ago, his neighbour took him to see a donkey owner who lived over the hills from his home. They found a donkey in a stable who seemed healthy enough but was terrified of people. It appeared to have been very badly treated – there was a large wound on the right side of its body. So Harfmann asked the owner to sell the animal to him.

"This is Burro, my first donkey," says Harfmann in an email interview. "He is still very scared of all kinds of sticks, and very shy about interacting with humans."

"Then I thought to myself that he needed company, so I asked around." He found a few people who were willing to part with their donkeys.

"In our area, in the past, people always took donkeys with them on their long trips to carry their luggage as well as protect the sheep from wolves. As times changed, there was no need for them anymore, therefore most donkeys lost their purpose."

Harfmann bought four donkeys (and a foal) from shepherds in neighbouring villages and paid a token sum for them. "The price for them was symbolic because the shepherds didn’t have any use for them anymore," he says. "The shepherds were very happy that someone wanted the donkeys and would even pay for them.

"Last year, two foals were born here, and my mule is the result of a short love between Vlad, my alpha male donkey, and Lori, a horse."

Presently, Harfmann has six donkeys and one mule. "I expect one baby to come soon," he adds.

He spends a good portion of every day caring for the animals. 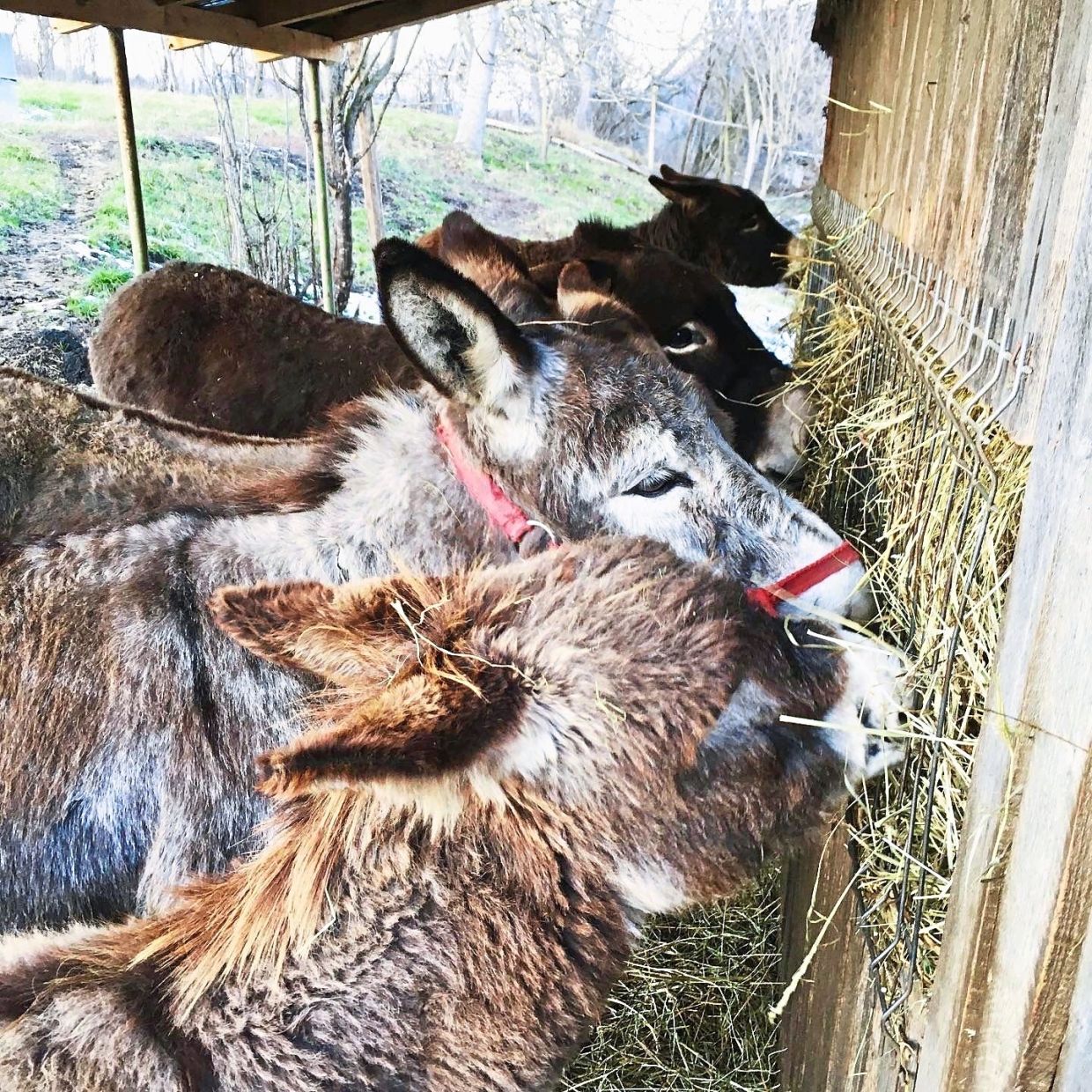 Some of the donkeys nibbling happily on hay at the sanctuary.

"I have my own land to make the hay. In summer time, I make hay to feed them over the winter.

"I clean the stables daily. And their hooves need to be cut about four times a year. Fences have to be built and fixed. I do almost everything on my own."

To give the donkeys a purpose, Harfmann puts them to good use in guided and unguided hikes for tourists. "That’s their only task and they love it because they are very curious, and it’s also good for them to move around rather than (just stay) here on the sanctuary."

He loves them all equally, and has given them names such as Bea, Maia, Luna, Sia and Taifun (the mule).

"Each of them has their special character. They are really amazing animals, very wise and peaceful," he says.

Harfmann also keeps five dogs. "My neighbour had a dog kept on a very short chain and nobody really cared about her. So, I asked him to give her to me.

"After some time, she gave birth to five puppies and, as I couldn’t find a good place for them, I kept them all. Unfortunately, the old lady died last year, but her (offspring) still give me a lot of love.

"I've also had a horse, some sheep and goats, but after an accident with Lori the horse, I decided to give them away. It was simply impossible to take care of all of them on my own."

"Way back during my days in Austria, I renovated an old farm house and kept a donkey. So, when I came to Romania, I already had some experience (taking care of donkeys). Also, I already knew about countryside life, renovating, gardening...

"Here, I’m practising it on a larger scale, and I’m still learning. I grow my own vegetables and can them for the winter months, and I bake my own bread in a newly built traditional bread oven. I have a big orchard with pear, apple and walnut trees. I also forage for wild fruits, herbs and mushrooms.

"As a side effect of this lifestyle, I'm eating less and less meat, even though I’m not vegetarian.

"One day, I was invited to participate in a local food market and sell some of my products. When I arrived at the place, each table had a name tag prepared, like the name of the farm or owner and the location. On mine, the organisers had written 'The Donkey Man' – apparently that was the most significant fact they knew about me!" he quips. 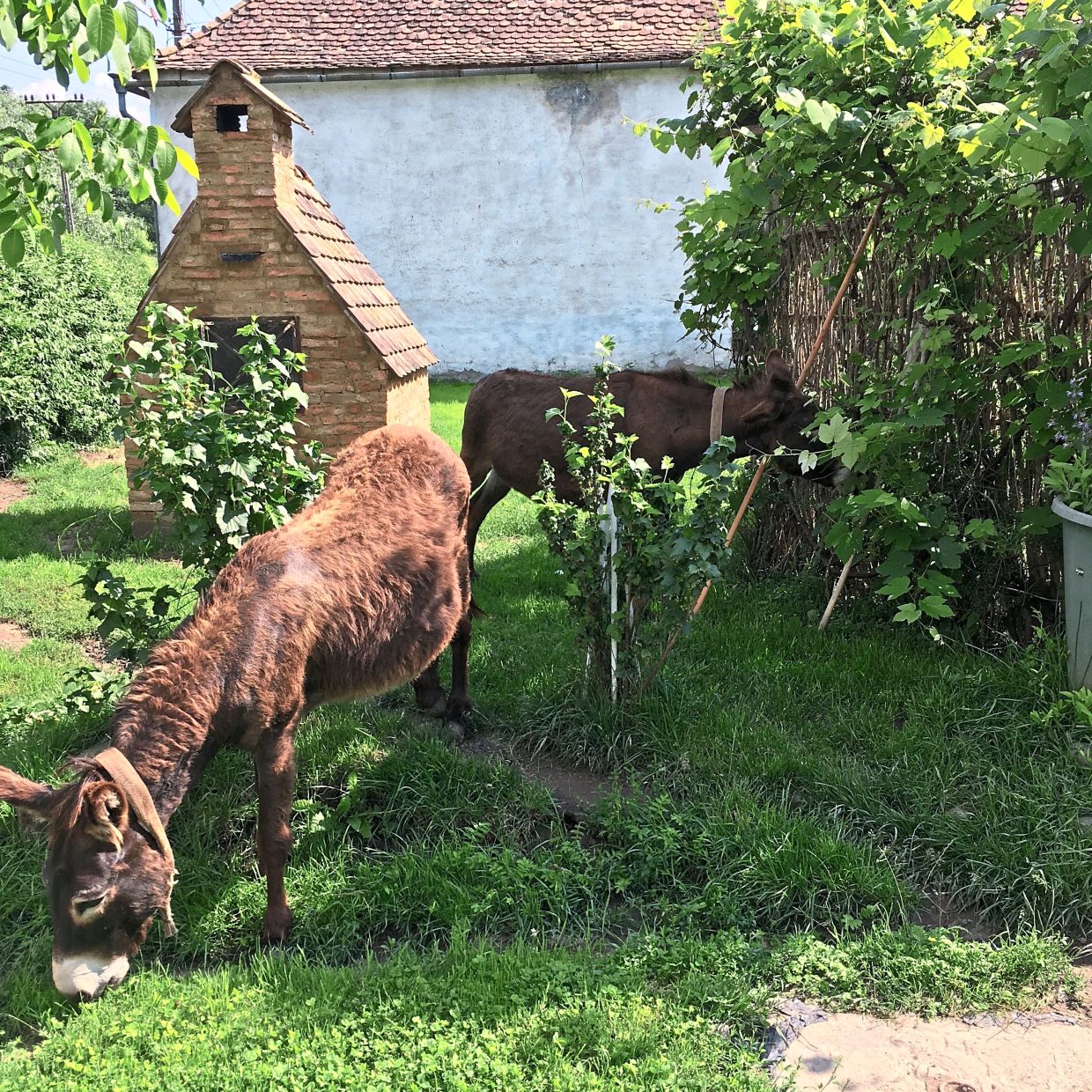 A couple of donkeys at the sanctuary. In the background is a traditional oven which Harfmann uses for baking his own bread.

Harfmann started exploring Transylvania and Romania 20 years ago when he joined a charity to help gypsies.

"I was amazed by its unspoiled nature, by the numerous villages which appear to be a living museum, and by the traditional lifestyle of the people in the Romanian countryside. A way of self-sustainable living which, in Austria, had already disappeared about 70 years ago," he says.

"After building up a travel agency for Western tourists to explore the quite unknown Romania, I decided to move here for good.

"Austria is also a very beautiful country but it’s overdeveloped. I enjoy the fact that in Romania there are still so many niches to find, so many things to develop and here, nature offers a wide variety of beauty.

"In a way, it was also kind of going back to (my) roots because my grandparents had to leave their house in Banat (today Serbia), right on the border with Romania, during World War II."

"One of the aspects which made me fall in love with Transylvania was the old farm houses. I have always been passionate about renovating old farm houses – I was already doing that in Austria," Harfmann remarks.

"In Romania, there were so many abandoned small farms and sometimes even whole villages, that I felt I had to use my skills here. From my passion for renovating houses, I grew the idea to build an online platform for rural holiday homes in Romania – and the first guesthouse I renovated was meant to be a model for Romanians who wanted to follow this example. Meanwhile, I’m renting out two houses: the first one since about 10 years ago (after a challenging renovation phase of three years), the second one since five years ago. "One reason why I love this life so much is that my tasks and activities vary a lot. In winter time, I close the guest houses and then you really have to know how to keep your own company. (My) activities in winter are mostly caring for the animals, making firewood – partly for myself, partly also for sale – making repairs and improvements to the houses and the land, and also creating travel plans and offers for travellers for the next season.

"In spring and summer, it’s all about seeding, planting, hay-making and taking care of guests and the houses, organising the tailor-made tours...

"In autumn, there is a lot of work to do, with harvest and preparing for the winter. My days are mostly filled from early in the morning till night, often 16-hour working days, seven days a week. But as I’m passionate about doing all this, I don’t feel it’s work. Everything is mixed: leisure and work. And in the evenings, I feel good when I have achieved some improvements."

Chickens make great pets, besides supplying eggs for your family

7 things beginners need to know about keeping reptiles as pets