Violin makers in the Italian city of Cremona struggling to survive

Cremona's current oldest luthier, Conia, 74, and his son Stefano Jr, 47, are pictured with a violin at their workshop in Cremona. Photos: AFP

Working in the shadow of the great masters, the violin makers of Italy's Cremona are valiantly fighting a shrinking market and foreign competition as they seek perfection, one violin at a time.

The birthplace of Stradivarius, Cremona is a veritable laboratory for luthiers from all over the world, where violin workshops seem to be everywhere you look.

Stefano Conia's studio – just one of the 160 in this northern Italian city of 70,000 inhabitants – has not changed for decades.

It's situated at the back of a flower-filled courtyard, and this native Hungarian, one of the doyens of Cremonese violin makers, heads there every day, despite retiring nearly 10 years ago.

"If I stopped making violins, life for me would be over. Every day I'm here in the workshop. It's an antidote to old age," said a smiling Conia, 74, whose father crafted violins and whose son is also pursuing the family tradition. The Italian city of Cremona, Stradivarius' homeland, has become a laboratory for luthiers from all over the world. Seen here is the Santa Maria Assunta cathedral and its bell tower.

Conia's workbench faces that of his son. Both are covered with files, clamps, compasses, brushes and small saws. Wooden planks are laid on the floor.

"Going into violin-making was a natural choice," said Conia's son, Stefano, known as "the youngster" who began handling tools at the age of seven or eight. He spent his childhood in the workshop his father opened in 1972, two months before his birth.

"I would play with the wood and the musicians would come and buy their violins and play," said the younger Conia. "It's always been a special atmosphere, which I really liked."

For the Conias, the violins lovingly made from flamed maple or spruce are more than just instruments – they become family.

"The instruments are a bit like children. They live thanks to the energy we give them, it is a part of us that will continue to live after our death," said Conia. Grisales, president of Cremona's Antonio Stradivari luthiers consortium, said the market for violin makers, which is an elite market, has shrunk.

Like the Conias, the majority of Cremona's luthiers are foreigners. Many came to study at the city's International School of Violin-making and stayed on.

"The school was started in 1938, the first teachers were foreigners and the students come from all over the world. There's a saying that 'Nobody is a prophet in his own country' and it's true that we, Cremonese violin makers, are really few and far between," said Marco Nolli, 55, one of this exclusive club.

Of the third of Cremona's violin makers who are Italian, only about 10% come from Cremona, he said.

Benedicte Friedmann, a 45-year-old from France, has been living in "the cradle of violin-making" for about 20 years.

"Coming to Cremona was – and maybe it's a bit pretentious to say this – like walking in the footsteps of the greatest, Stradivarius, Guarneri, Amati," she said, referring to the city's most revered craftsmen of centuries past. French luthier Friedmann poses with a violin at her workshop.

"Being a luthier here means being able to devote yourself 100% to creating instruments. And the more you do, the better you become," said Friedmann.

In France, she explained, in order to earn a living as a violin maker, many people do repairs, re-hair bows, sell accessories, which leaves them little time for their art.

The situation is not always simple, however, for the violin makers of Cremona, who enjoyed growth in the 1960s-1980s, before things got tougher.

"Our market, which is an elite market, has shrunk. We are facing a very serious problem," said Giorgio Grisales, the president of the artisans' consortium.

Fewer performances and musical venues and the preference of seasoned violinists for antique instruments from the 18th and 19th centuries have hurt the niche industry. Violins displayed in the shop and workshop of Italian-Colombian Master luthier Grisales.

Even before the coronavirus swept through northern Italy, Grisales said,"the sector was in trouble because of ruthless competition from China and Eastern Europe".

China is the world's leading producer of bowed instruments with US$77.8mil (RM332.6mil) in exports in 2019, or 1.5 million instruments, more than half of the world market, according to the International Trade Centre.

Italy is in fifth position, with 4.6% of world exports, behind Britain and Germany but ahead of France. Italy's main customers are Japan and the United States.

Italian violin makers must contend with counterfeit instruments in the marketplace, some built elsewhere and advertised as Cremonese, but above all competition comes from lower priced violins. 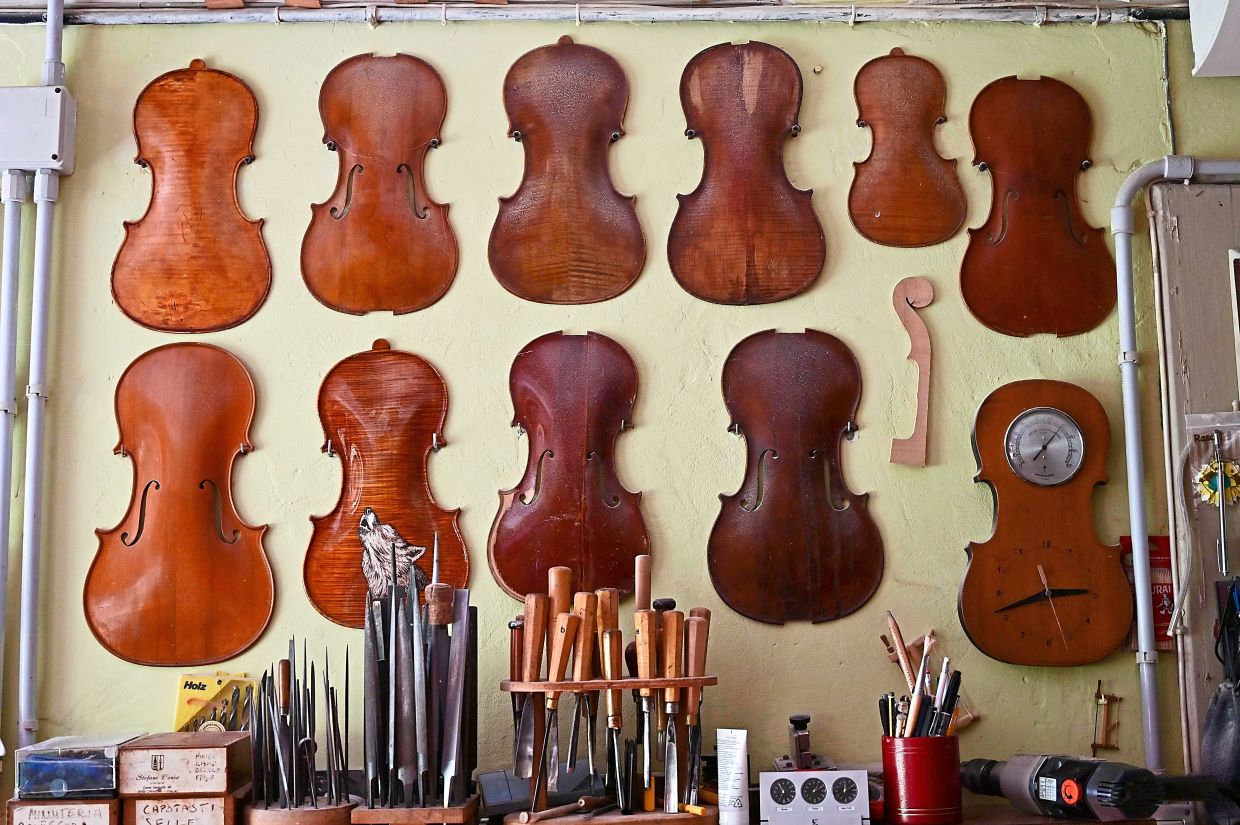 "They are economic instruments, made in series, and intended for those who are beginning to study," explained baroque violinist Fabrizio Longo.

Friedmann, the French violin maker, said that the process of making a violin in China is for the most part vastly different from the craftsmanship she and others in Cremona engage in.

"They are handmade, but 10 violin makers work every day on the same parts. It's a line job and at the end you get an assembly," she said. "There's no uniqueness, no authenticity."

In Cremona, according to Grisales of the consortium, it takes at least 300 hours to make a violin, or between two and three months.

Another challenge for the luthiers is to stand out among the Cremonese competition.

"Getting known is a bit laborious," while the search for orders "is a permanent quest", said Friedmann. Some violin makers were able to offer lower prices, hurting fellow luthiers, by working on the black market and avoiding high taxes

Despite these challenges, Friedmann said, the concentration of violin makers in Cremona creates a healthy environment of emulation and the desire to excel.

"When I'm asked which is the most beautiful instrument I've made, for me it's always the next one..." – AFP Relaxnews France will not let Lebanon down - source close to Macron