Expatriates in Malaysia who are stranded abroad hope that they will be allowed to return home soon. — Photos: Filepics

British expatriate Lorraine Ann Gordon was in Britain to organise her mother’s death anniversary memorial when the the movement control order (MCO) was announced in Malaysia. Now, she is stranded abroad, separated from her loved ones and barred from entering a country she has called home for the past 20 years.

“Unfortunately, because of the short notice of the Malaysian border closure, I couldn’t get back by the deadline.

“My husband is still in Kuala Lumpur. We speak daily, but it has now been several weeks (of separation). We are becoming depressed and despondent after being separated for so long, and not knowing when we will be reunited, ” says the housewife.

The MCO, which started on March 18, is currently in its third phase following two extensions by the government. Prime Minister Tan Sri Muhyiddin Yassin recently announced that the MCO will be extended to May 12. Many expatriates have been reportedly stranded abroad and unable to return to their homes in Malaysia. — Reuters

For expats like Gordon, who were abroad before the MCO kicked in, this means they are currently “locked out” of their homes in Malaysia.

“I simply can’t get back to Malaysia, because I am a foreigner – even though I am willing to pay for my own quarantine, ” she says.

Gordon has tried reaching out to the relevant authorities, but to no avail.

“I have contacted various authorities to see if they can help, but the Malaysian stance is conclusive. I understand this for short-term visitors such as holidaymakers, or people travelling through.

“But I am a bit confused as to why after 21 years, holding a Talent Corp visa, that I am not allowed back into a country which has been my home for so long, ” she shares.

Gordon hopes the government will help her reunite with her family during this crisis.

“My husband and I have been in Malaysia for 21 years, it has been a great home for us. My husband works hard, pays taxes and we both have private healthcare.

“We have not, nor will we be a burden on the Malaysian economy. All we want is to be back together. We are now approaching our 60s and I worry that at a time when we should be together more, to look after each other, we are being forced apart, ” she says.

Gordon’s plight is echoed by many worried family members and spouses of expatriates who have taken to social media to seek advice on how to get their loved ones back into the country. On Facebook, there are now Malaysia-based expat groups where those affected share resources and offer moral support during these trying times.

A concerned mother, who only wishes to be known as Liz, says she has been trying to get her son who is currently studying in the United States back to Malaysia. 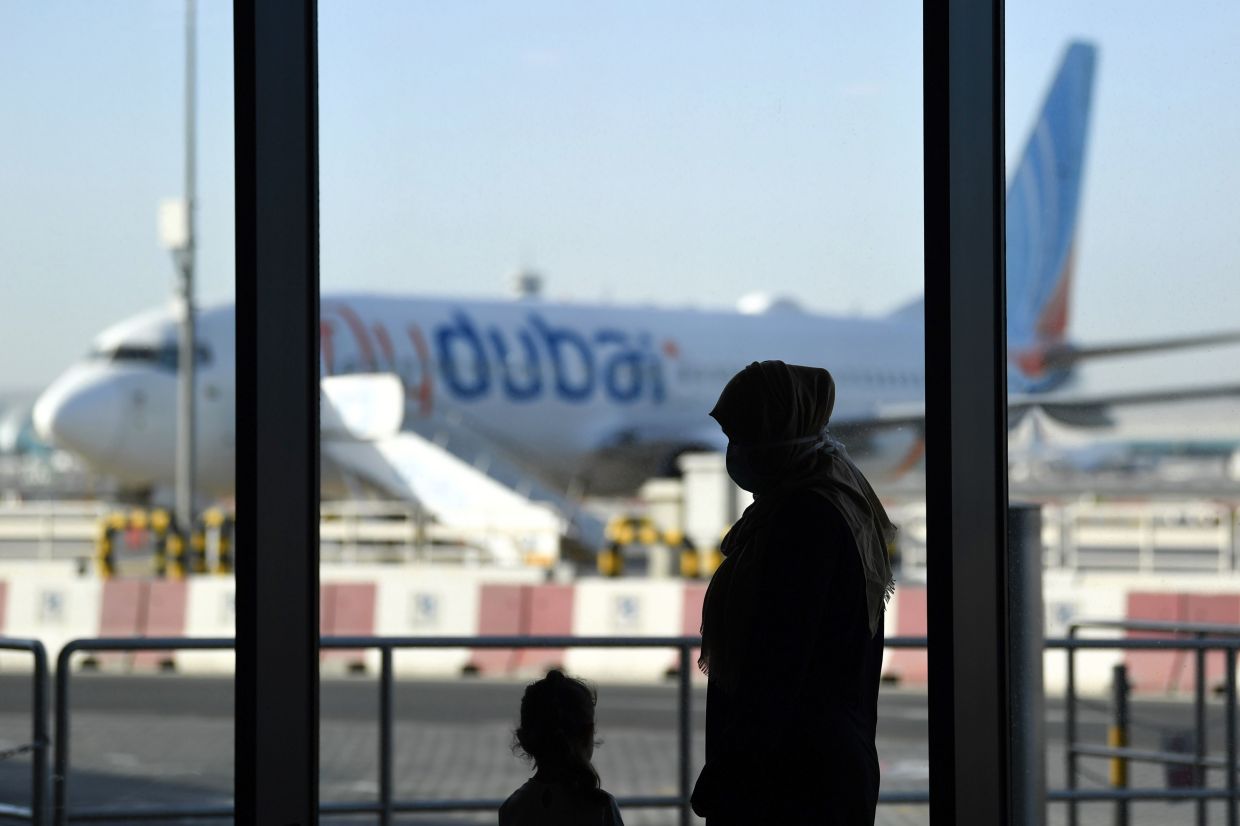 Expat parents in Malaysia hope to be reunited with their children who are stranded abroad. — AFP

“He’s one of the very few students remaining there. We missed the window of opportunity to bring him home before the MCO as we were waiting on some important decisions from the university, ” she says, adding that all classes are now conducted online.

Liz, who came to Malaysia 12 years ago with her family, hopes the government will help reunite the expatriate community here with their family members who are stranded abroad.

“Even though we, the expats and our adult children, don’t carry a Malaysian passport, we are very much Malaysian in our hearts.

“My son grew up here, and this is the only home he has. He proudly displays the Malaysian flag in his university apartment, he loves his adopted country with all his heart.

“Unfortunately, after he turned 18, his dependent visa has been cancelled, and now he is considered a mere tourist, ” she says.

Liz says families of the local expat community here just want their family to be close and safe during the coronavirus crisis.

“All we are asking is to allow our son to return home. He will do anything required, such as the mandatory quarantine and taking all the necessary tests. I hope that the government will consider reviewing cases on an individual basis, ” she says.

“My son might be legally considered an adult, but let’s be realistic: he’s only 20. He is a full-time college student, our dependent, with no income. He is very lonely and desperate to come home!” Liz adds.

On that note, Liz thinks the government is doing a good job in containing the Covid-19 pandemic.

“Malaysia is doing an outstanding job controlling the spread of this horrible disease. I am very proud of the people and the government.

“Malaysia can teach the world how smart leadership and mutual efforts of the people can result in winning this difficult battle, ” she says.

For holders of the Malaysia My Second Home (MM2H) visa, being barred from returning to their homes here is a curious decision.

Andy Davison, in a letter to The Star, says this seems very unfair to people who have made Malaysia their home and place of permanent residence.

“When the MCO was imposed, some people were travelling overseas but never thought they would be denied access to their homes, but that is what has happened. They are now stuck in foreign countries, incurring a lot of extra and unexpected expenses, ” he says.

“Apart from the humanitarian factor of denying senior citizens access to their homes, I think this also sends a very negative message to the international community about the programme and how Malaysia treats people whom they have invited to come and live here, ” he adds.

Launched in 2002, the MM2H programme allows foreigners who fulfil certain criteria, to stay in Malaysia for as long as possible on a multiple-entry social visit pass.

It is open to citizens of all countries recognised by Malaysia regardless of race, religion, gender or age. Applicants are allowed to bring their spouses and unmarried children below the age of 21 as dependents.

Another MM2H holder, Jamie Lee, in an email to The Star, hopes he can come home to Malaysia soon.

“Whilst the MCO has been difficult for everyone, expats like myself are now being refused entry to the country in which we have been granted legal permission to reside.

“We do not seek to criticise the government in anyway here (the expat community are actually very impressed with Malaysia’s response to the crisis), however we just would like to bring awareness to an area in which we feel we have been overlooked, ” Lee says. Nancy says she is aware that there are MM2H members who are currently stranded abroad due to the MCO in Malaysia.The MM2H programme is under the purview of the Tourism, Arts and Culture Ministry.

Minister Datuk Seri Nancy Shukri says she is aware that there are MM2H members who are currently stranded abroad due to the MCO in Malaysia.

“The Malaysian authorities empathised with the situation and in fact, has held continuous discussions on this matter.

“However, in view of the current protocol to control the pandemic, the decision taken is that the MM2H participants who have been stranded abroad will have to wait until they are allowed to return to Malaysia, ” she says, when contacted.

Nancy adds that it is vital to follow the MCO ruling.

“The MCO has resulted in positive outcome, leading to the move towards the flattening of the curve of Covid-19. However of late, the return of Malaysians who were stranded abroad has contributed to the new spread of the virus.

“New measures are being undertaken to deal with such imported cases, ” she explains, adding that concerted effort is needed to curb the spread of the coronavirus.

Nancy gives the assurance that she will revisit this matter as the Covid-19 situation eases. “We therefore would like to seek your kind understanding on the decision taken by the Malaysian authorities. We will continue to revisit the matter as the pandemic subsides and would certainly be glad to have you return safely to Malaysia, ” she concludes.

Expat parents in Malaysia separated from their children during MCO