Using their art to challenge the patriachy

Activist art, says artist Yante Ismail, is grounded on the act of "doing": addressing political or social issues that has been in existence throughout history.

FAIZATI ALI draws cartoons as a response to issues in society that she feels strongly about.

"It's the way I express myself and share my views with others about issues that are important to me ... injustice, discrimination and the inequality faced my most women, especially Muslim women in their everyday life," she says.

So when Faizati saw the misguided and sexist posters put out by the Women and Family Development Ministry aimed at encouraging "family harmony", she responded with several cartoons of her own with a more gender-balanced perspective of marriage and household responsibilities.

She drew two cartoons in her series, Kebahagiaan Rumah Tangga Dibina Bersama -Bagaimana untuk elakkan pergaduhan Suami isteri di rumah. (A marriage is built together - how to avoid discord between husbands and wives at home) Faizati Ali has been drawing cartoons since her teens and uses them to express her views on social,issuesIn her cartoons, the husband realises that household chores are a shared burden and he should do his share at home. No nagging necessary. The characters are in home clothes - the wife isn't expected to "dress up" for her husband (one of the ministry's posters urged women to wear make up at home for their husbands).

The caption for Faizati's cartoon reads: Don't wait for your spouse to tell you what to do; do your share of the house chores. Remember in a marriage, responsibilities are shared by the couple.

Faizati says she was deeply affected by the misogynistic messaging in the ministry's posters.

"The content of the inforgraphics produced by the ministry struck me hard. It is degrading and regressive, to say the least. They promote stereotypes on the role of women and to think that they came from a ministry that is supposed to protect women's rights and interest? 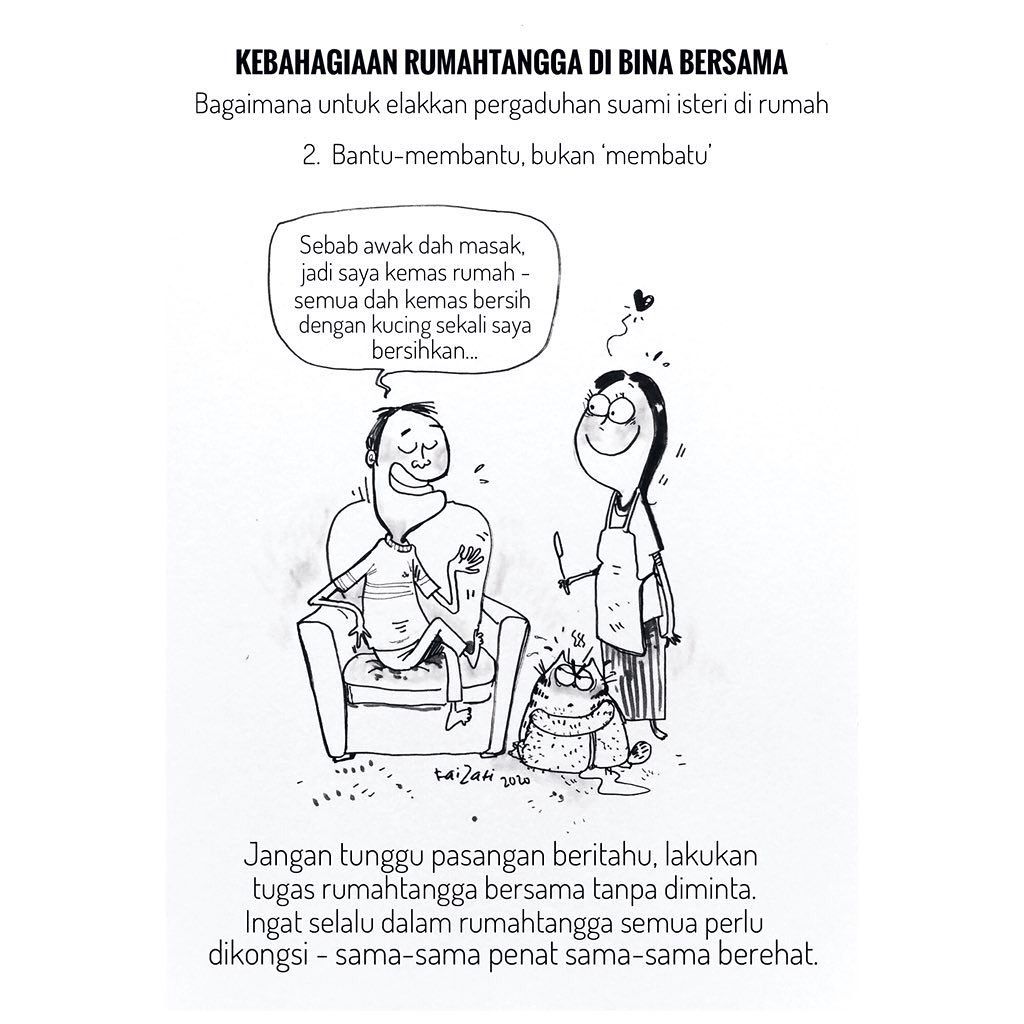 Faizati Ismail’s art“My pieces were to counter the messages that were conveyed by those infographics: to demonstrate that household chores are shared responsibilities and marriage is a partnership where both husband and wife need to treat each other with respect.

"It's very simple to me - everything starts at home. As long as women continue to be mistreated at home, things won't change much in society," says Fazliana adding that the Women's Ministry should know this and not affirm harmful gender stereotypes. Faizati aliA lawyer by profession, Faizati posts her work on her Instagram account (@byfaizati01); some of her work has also been published in a book, Menghayun Buaian Menggoncang Dunia (Rocking the cradle, shaking the world) that was recently published by NGO, Sisters in Islam.

"Cartoons and comics appeal to everyone be it men, women or children and all classes of society. Messages relayed through art have the ability to influence society. It is the medium I chose to highlight issue and raise awareness and I hope that my cartoons will make readers at least stop and think, if not more," she says.

Faizati is just one of many Malaysian artists who use their work to provoke thought and conversation about social issues, including gender stereotyping and social injustice. Her artwork is graphic and provocative, featuring a series of unsettling images of a woman with visible bruises on her faces and body, with the words: ‘Was it my cooking?’, ‘Perhaps it was my outfit?’, ‘Perhaps I should have worn makeup at home’. Then it ends on a dark note: the woman donning a Doraemon mask, and asking: ‘(Maybe) it was my tone?’

“I saw the news about the PSA gaining traction. In combination with frustration with their messaging, and the lack of emphasis on domestic violence, I decided to use this as an opportunity to vent frustration towards the ministry, and at the same time highlight the difficult and uncomfortable topic of domestic violence,” said Tan, 30

Activist art, says artist Yante Ismail, is grounded on the act of "doing": addressing political or social issues that have been in existence throughout history.

"I see art activism as combining the creative power of the arts to provoke us emotionally with the strategic planning of activism to push for social change," says Yante, a self-taught artist whose work aims to challenge "the misogyny that surrounds our patriarchal existence". She believes that social change can only happen when people are moved to change their minds. And art, she feels, has the power to change minds.

"Laws alone cannot change a patriarchal belief system that sees women as lesser than men, and that sees women's bodies as not belonging to them. To change the world, we need to image what a changed world might look like. Art activism draws from culture to create culture, and if successful it can impact culture.

"I believe that art should not just evoke an emotional response, it should also challenge thought and provoke discourse. I believe that art is a platform for social activism and change. My work challenges patriarchy and the damaging social, religious, cultural and social norms that dictate how women exist in society. My art challenges the institutional and societal obsession with controlling women's bodies. That is what drives me," she says.

Survey key to getting data on domestic violence