Dr Helmy Haja Mydin cautions prospective returning professionals to have realistic ambitions, and advises them to at least have a five-year plan on what they'd like to accomplish here. Photos: Dr Helmy Haja Mydin

Noble? Perhaps. But Dr Helmy Haja Mydin’s return to Malaysia is far more than just a feel good story of wanting to do ... er, good. With some of the country’s best talents out there recognising the need for their abilities here, the 34-year-old respiratory specialist chose to uproot himself from Scotland and head back to tanah air.

“I feel there are more opportunities to do things in Malaysia than in more developed countries. In Britain, they have plateaued where service development is concerned,” he says at a recent interview, intimating that while the place we call home isn’t in dire need of a raft of changes, there is still much to be done, especially in the area of policy development.

It’s now apparent to him that he can contribute here, even beyond the scope of his occupation.

“I could influence the narrative of civil society. If you don’t have a vested interest in the country, you will not have the same passion for these things if you were elsewhere, say in Britain. At the end of the day, as much as I love it there, it’s not my country.”

Dr Helmy knows he’s governed by the hand of idealism, but if this is where it all begins for him, it’s not a bad place to start at all. Conversely, he quips, “Of course, I could regret all of this in 10 years.”

But it took many years in the first place for him to choose this profession. He wasn’t even sure if medicine was what he wanted to do; it took a process of elimination to make the decision.

“I never liked maths, so that ruled out accountancy and engineering. I wanted to write, but my parents weren’t encouraging,” he says.

An older sister’s pursuit of medicine also made the decision easier. It was his third year at medical school, when he began having face-to-face contact with patients, that crystallised his choice.

“I finally got to see human beings, as opposed to the stuff from books.

“That’s when you start to have a connection with what you learn. You see the progress from wellness to disease ... it was an abstract concept before that.”

His patients’ stories intrigued him, which is when he realised that he enjoyed talking to them and immersing himself in their lives. Their unique stories took him back to his interest in reading fiction, the Tom Clancy fan professes.

His literary trek took him from comic books like the The Sandman through to Shakespeare, and while he concedes that’s not the usual trajectory an avid reader takes, that’s exactly how it happened for him. Along the way, he fed his voracious appetite for fantastical themes, tanking up on the works of Neil Gaiman and David Mitchell. “Oh, and Bat-man, too,” he slips in, beaming.

It might have been this unorthodox mindset that allowed him to thrive in a foreign land while pursuing his medical degree. After graduating from Newcastle University in 2005, Dr Helmy worked for three years as a specialist trainee in the Aberdeen Royal Infirmary, a teaching hospital in Scotland.

While he treasures his experiences in Britain for a multitude of reasons, he has a sound basis for returning home. He appreciates how the British medical fraternity is structured, and can’t say enough of what he learnt there. But the rigidity can also hinder development.

“If you wanted to be a cardiothoracic surgeon, there is a path to follow, but if you wanted to switch, to take a year off to learn about neurology, you can’t,” he explains.

Given the Western world’s history in the field of medicine, it comes as no surprise that Britain is well ahead of Malaysia. “They’ve just been doing it longer, and have had the luxury of time,” Dr Helmy says.

This available time has catered to the growth of doctors there, with mentoring an integral part of the development process.

Dr Helmy puts things into perspective: “There are fewer than 100 respiratory consultants here, but in Britain, there are more than 1,000. They have twice Malaysia’s population, but have 10 times more consultants, so you can see the discrepancy in terms of manpower.”

He is grateful that he was guided and taught to make the right calls as situations presented themselves, singling out Dr Gerard Meachery, a lung transplant specialist who actually hails from Johor Baru, as a mentor of worthy mention.

“There is almost a balance you need to reach. If they (mentors) are too prescriptive, you never really get to the level where you take ownership of your own career ... you don’t discover yourself. By having someone judge you objectively, you have a fair understanding of your strengths and weaknesses, and that’s important.”

The sheer lack of experienced manpower against the glut of juniors makes this an obstacle for practice in Malaysia. But baby steps is clearly the way to go – Dr Helmy believes that this shortage of experts in Malaysia is what will provide him the best opportunity to ply and hone his trade.

His return is courtesy of the Government’s Returning Expert Programme (REP), an initiative that does exactly as its name suggests: returning the nation’s best talents to where they are needed most. According to Dr Helmy, talent acquisition agency TalentCorp Malaysia played a key role in picking up on his abilities and smoothing his return home.

Leaving Scotland was tough, though, especially with the good friends he had made there. “I was there for 14 years, you naturally build bonds in that kind of time.” But the calling to be back on home soil to hone his trade and be with family proved too strong to resist.

He advises professionals who might take up the REP to manage their expectations: “Make it at least a five-year plan and know what you want to do. Align your expectations to reality,” he offers.

His hope is that Malaysia will one day have a patient-doctor ratio that can ensure all Malaysians lead healthy lives. But there’s still a way yet to get there.

“We need to spend the next number of years to get the medical field to a higher standard. We are lacking specialists and don’t have the funds to train more people. And we also have a very rapidly growing elderly population,” he says.

Ultimately, Dr Helmy – who now serves as a consultant physician in general and respiratory medicine in a Kuala Lumpur hospital – sees Malaysia as the perfect place for professionals to fine-tune their trade in a country brimming with opportunity.

The brain drain phenomenon might still be rife, but there are signs of a new dawn. And if Dr Helmy’s story is but a few rays of sunshine, that’s light at the end of the tunnel, at least. 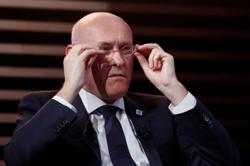