The story of Aceh’s resilient people who overcame the odds in their journey to recovery.

When I arrived in Aceh, health workers were placed in temporary housing with great challenges that we in Malaysia are not used to. The preoccupation with finding clean water to bathe or the fear of the mild daily aftershocks paled into insignificance when we heard the survivors’ tragic stories.

Take Aisyah, for example. She recalled grabbing her two young children from bed and running ahead of the huge wave that was threatening to engulf their housing area. She ran as fast as she could, holding one child in each hand but soon she had to swing one child to safety, fully aware that in that split second, her other child would be swept away. How could a mother choose between two children in such a situation? The guilt never left her.

I was overwhelmed when I heard her story but I soon realised there were many more like Aisyah battling the guilt of making similar decisions.

Farouk on the other hand had suicidal intentions. He was clearly depressed, having lost weight and sleeping poorly ever since the tsunami. He recalled that fateful morning when his only son ran up to him in the yard of their house, shouting that the villagers told him large waves from the sea were heading towards them. To deal with the overwhelming number of dead before diseases could arise and spread, bodies had to be buried in mass graves. This photo, taken in 2005, is of one site in Aceh Besar alone that has 45,000 bodies in a grave the size of a football field. Such unceremonious burial disturbed many, no doubt affecting the grieving process and survivors’ mental health.

Farouk slapped his son and told him to go inside the house to complete his homework and that he would have none of the boy’s usual “pranks”. The boy went inside sobbing and that was the last time Farouk saw his son.

When the waves hit, Farouk was swept to safety onto the rooftop of a building a few kilometres away but his wife and son died trapped in their house. The next day, Farouk frantically looked for them and found their bodies lying close to each other among hundreds of the dead, strewn all over the city.

He could not pull himself together and felt guilty for chasing his son into the house. He contended that God should have taken him instead and spared his son. Treating Farouk was a challenge but counselling and medication saw him through his turmoil, although his pain lingers to this day.

Months passed and many survivors made it through the difficulty of living in temporary housing with little or no access to water and sanitation. Education, earning a livelihood and even the opportunity to mourn the dead were denied them by their circumstances. Soon after the tsunami, the Indonesian military, with the help of foreign and local aid workers, cleared the bodies from the coastal areas.

In one site in Banda Aceh alone, 45,000 bodies were placed in a mass grave site the size of a football field. This unceremonious burial disturbed many.

To facilitate the mourning process, we landscaped the area together with the locals in the spirit of gotong royong (working together for a common cause) and built a large structure over it that would serve as a place of contemplation and to perform tahlil prayers. Such small gestures meant a lot to the grieving survivors.

Six months later, I was asked to return to my job as a psychiatrist in Hospital Kuala Lumpur. I pleaded for an extension of one more year to complete my work in Aceh. The then Director General of Health graciously agreed to the request but reminded me that I would have to return and serve my own country after the extension.

Six months became one year and the recovery process in Aceh had only just begun. People were slowly moving into new houses or their old homes which were repaired or rebuilt. The aftershocks continued to be a source of great worry. Every day, I slept in my work clothes with my passport and some US dollars in my pocket, fearing that I would have to run in case of another earthquake.

True enough, in the early hours of an otherwise quiet and salubrious morning in the surroundings of a padi field, I felt my bed shake violently and heard window panes shattering. I ran down from the first-floor bedroom when I heard concrete collapsing behind me. I turned back to see that the whole staircase had crumbled into a pile of bricks.

I ran out of the house unscathed except for some minor bruises but soon after that traumatising incident, I was faced with a dilemma. Should I just quit and go back to the safety of Malaysia where such dramatic scenes are only seen in the movies? Or should I continue and just hope for the best? After three days of vacillating I decided to stay and fulfil my promise to the Aceh Provincial Health Office that I would help in the recovery process.

Soon, my 18 months in Aceh passed. There was certainly a lot of improvement and the survivors went about their lives, demonstrating a resilience that surprised many, including the World Health Organisation which had predicted a longer recovery period. Yet there was still much to be done.

Aceh had no mental health services except for the sole mental hospital in the capital of Banda Aceh, catering for a population of 4.2 million.

At any given time, the occupancy in the 140-bed hospital was close to double its capacity. Mental health service was mainly custodial in nature but the tsunami opened up the minds of the otherwise rigid bureaucracy and political structure.

In the meantime, I received reminders from the otherwise friendly administrative staff at Hospital Kuala Lumpur that I would face disciplinary action if I did not report for duty after my one-and-a-half years of “leave without pay”.

Again, I had to make a choice. Should I leave my work in Aceh uncompleted or should I just pack my bags to go back to the comforts of government service in Malaysia? I took the bold step of resigning from the Health Ministry to continue my work in Aceh.

There was no turning back and that was the real beginning in my long-term commitment to mental health development in Aceh.

Training in mental health was given to nurses and doctors in primary health clinics; home visits were incorporated as routine outreach services. 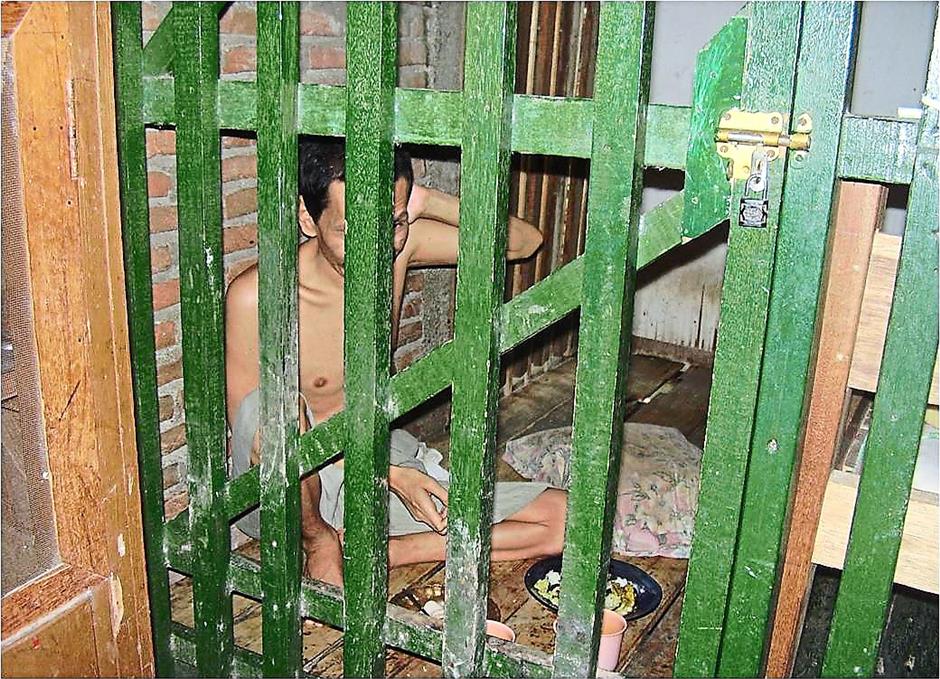 Before the tsunami, Aceh had just one overcrowded mental hospital in Meulaboh, catering to a population of 4.2 million and mental health services were mainly custodial in nature. This photo, taken in 2007, is of a man with chronic mental illness.

The main challenge was to convince the local governments of the sustainability of such a programme. It was an uphill task to convince each district administration to make the necessary budgetary allocation, given the decentralisation of government and political structure in Indonesia with a high level of autonomy for the districts.

Fortunately, the idea caught on and the upscaling of services even went one step further – psychiatric in-patient care was established in several district hospitals.

The greatest fulfilment for me in my years of developing mental health services in Aceh was in the removal of physical restraints from people with chronic mental illness.

Aceh had very high numbers of such people who, for lack of proper mental health services, were chained or locked up by their family members.

Agam (not his real name) suffered from schizophrenia, a chronic mental illness characterised by psychotic episodes. One day he stabbed his neighbour with a kitchen knife and after that, was chained under a tree outside his house for five years.

When my team found him, we convinced family members and other pessimistic elders in the village that Agam could recover with proper medication and supervision by a caring family. Today, Agam is gainfully employed in a sawmill and living a life of dignity like everyone else in his village.

The establishment of community mental health services meant hundreds of mentally ill people like Agam in Aceh are now free to live a life of self-respect, demonstrating that even people with chronic mental illness can also recover and be productive. They too have a right to lead normal lives like every other human being.

Today, Aceh is the only province in Indonesia which has a mental health law or qanun to protect the rights of those with mental illness. Much has changed in Aceh, from a province that suffered the double blow of a 30-year civil war and then the tsunami.

Today, the proud people of Aceh with its glorious history of Islamic civilisation have demonstrated to the outside world that with strong commitment and faith, a psychologically fractured society can once again stand up and be counted. The bustling city of Banda Aceh, which bears no trace of the destruction it faced 10 years ago, is a testimony to the resilience of the Acehnese.

Remembering Tsunami 2004: The future’s not safe

Remembering Tsunami 2004: No end to pain for family that lost five children

Remembering Tsunami 2004: 'I wanted to know'