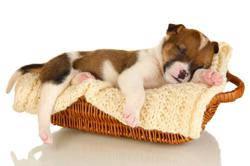 Dogs love to be busy with their human family. Some love simple time together while many also love toys. We spoke to three Malaysian dog owners about their pet’s favourite happy times.

Malaysian dog lovers will recognise Asli, because this 13-year-old lady is a Telomian, a rare dog that comes from the Telom River in the rainforests of Peninsular Malaysia.

Asli was abandoned by her Orang Asli owner at the waterfalls in Cameron Highlands 11 years ago but then had the good fortune to be adopted by Janice Shun, a vacation rental host manager in Kuala Lumpur.

Today, the little dog that roamed the waterfalls hoping for scraps lives in the lap of luxury. However, in some ways, Asli has retained her roots.

“She doesn’t like toys,” Shun remarks. “I think it’s because she grew up in the forest. She doesn’t have any interest in plush toys or balls at all. Mind you, she chews my doorstopper sometimes.”

What Asli really loves is one-on-one time with her best human. “Her favourite is cuddling with me,” Shun smiles. “We snuggle up together on the sofa, and watch TV. She’s a medium-sized dog, about 11 kilos, which is the perfect cuddle size.”

“We also love going to the park. We have a special spot in Desa Park City park where you’re allowed to go off-leash. The second she’s free, Asli rolls in the grass. Afterwards, she goes to play with other dogs.”

Asli is extremely friendly and social, so her mum organises dog play dates.

“I think of my sister’s dog as Asli’s cousin,” she laughs. “She and Asli are best friends. When we have family gatherings, the dogs run around the house and play. There are also two good friends of mine who live nearby. One has two dogs and the other has three. When we get together, our dogs do too.”

Bruno is four-year-old black Labrador who hulks about his garden, the picture of an impressive guard dog.

“Bruno’s favourite toy is his red Wobba,” Dee Dee Quah, a medical conference organiser in Kuala Lumpur confides. “It’s got a ball inside and a squeak, and he loves it. He squeaks it at passers-by so he’s quite famous in my area as everyone comes by to see him. It completely ruins the macho image.” 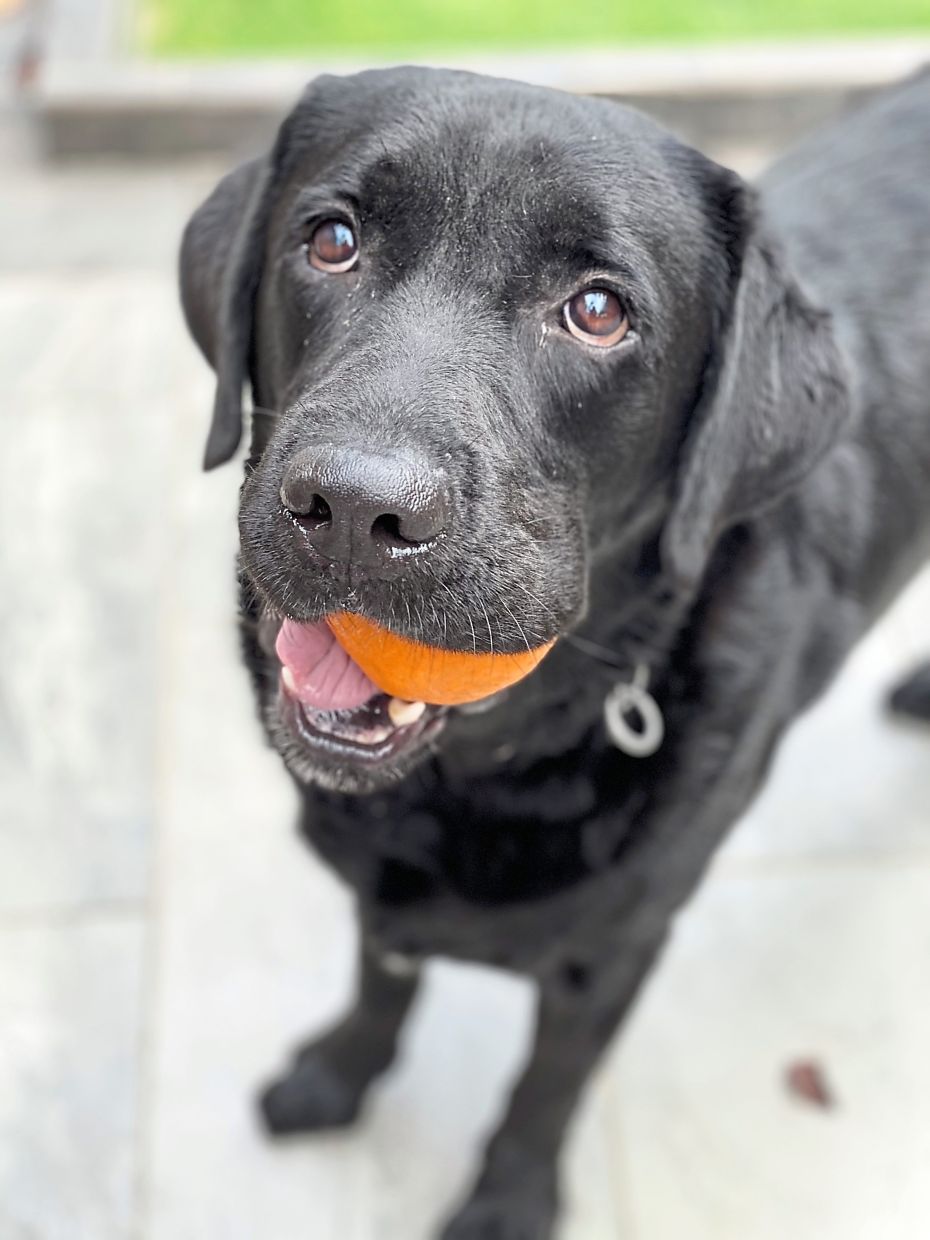 Big dogs can be destructive and this boy is no exception. “I’ve changed my car number plates three times because he chewed through them when he was a puppy,” Quah shares. “He had a go at my brother’s car side mirror too. But the Wobba is made from some super tough material, so it’s lasted.”

Bruno also likes traditional games like fetch but he has an unusual hobby. “Bruno is scared of thunder, it makes him shiver, but he adores water,” Quah says. “So when it rains, he’s out there, getting wet. But if it’s noisy, he shivers too.”

Polo and Mian, the toy lovers

Ryan Leong from Puppy Cottage, a grooming shop in Taman Tun, Kuala Lumpur, has seven dogs, all of which are his pets who live with him, but they also have a day job, working as training dog groomers for the academy.

The pack comprises three Bichon Frise, two Toy Poodles, one Cavalier King Charles Spaniel, and one Schnauzer. They all have their own likes, but two in particular enjoy their toys.

“Our eight-year-old Polo is a Schnauzer, and historically was bred to catch rats,” Leong points out. “He has a plush toy rat specially made for dogs.” 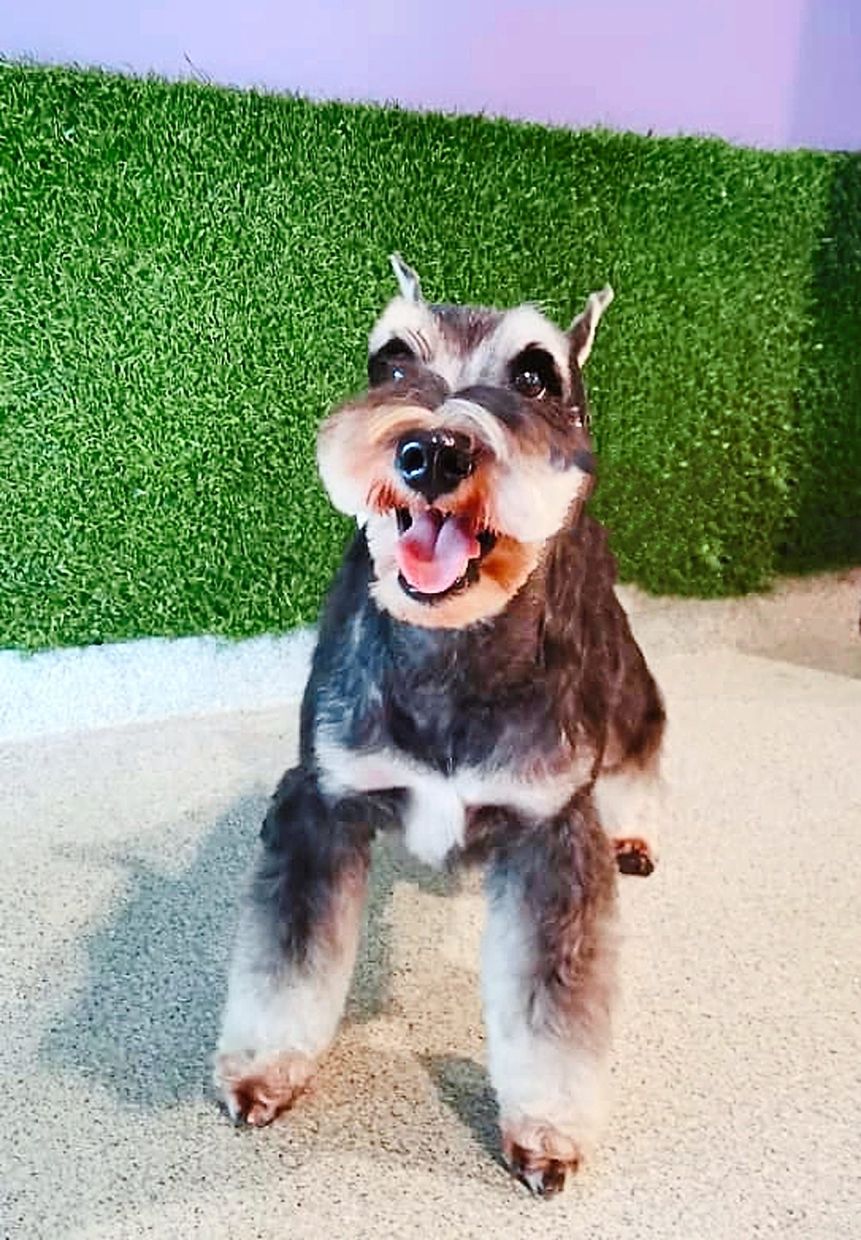 Polo is a Schnauzer, a breed that historically was bred to catch rats, which may explain why he loves to 'kill' his toy rat. Photo: Ryan Leong

“Every day he lies down and stares at it. You can see his imagination kick in as he’s pretending to be intimidating it. He will stare and stare, and then suddenly bounce up, and run over. He picks it up, swings it around, tosses it up in the air and ‘kills’ it. Then he backs off and does it again.”

Mian who is a 10-year-old Bichon Frise, a curly-haired breed originally from Spain, has appropriated a toy meant for kids.

“Mian has her rubber crocodile, and it’s her absolute favourite,” Leong laughs. “It’s made from rubber, so it’s nice and chewy. She will sit for hours biting on it, and very often, she will fall asleep with her paws around it and a bit of it in her mouth.”

Playing safe squeaky-toy fetchAs the country opens up again, you may be spending a bit more time away from home and your pet. As such, dogs may be lonely. This can lead to poor mental and physical health, and perhaps behaviour like unexpected chewing and barking.

The best preventative is to ensure your pet has lots of human company. Work out playdates for social dogs, ask friends and family to walk your pet when you’re out, or hire a dog-walker. Also, ramp up your time together so your pet gets plenty of happy time with you.

One of the best ideas for special bonding activities is to play squeaky-toy fetch. Little dogs like Mian can play it at home, but big dogs like Bruno will need a garden or park.

While humans may favour a silent toy, dogs like Bruno tend to prefer the squeaky kind because they mimic dying prey. This may be an uncomfortable thought but dogs have their instincts and, as nobody is harmed, it’s all good. So go with a good noisy squeak.

The main issue with playing fetch is that over-excited dogs can get toys stuck in their throats. So when buying a toy, make sure it’s too big to be accidentally swallowed but not so big that your pet can’t fit it in its jaw.

The other issue is that the material must be safe for dogs. This means it has to be edible or digestible.

Avoid toys made from polyvinyl chloride (PVC) as it tends to contain toxic chemical additives like phthalates that cause liver and kidney damage. Many toys also contain lead, that causes upset stomachs, brain damage, organ damage and that can also kill.

Finally, look for a product that's free of Bisphenol A (BPA). There is concern that BPA affects growth and behaviour, which is why plastics made for humans are now increasingly BPA-free.

While there are no international standards, quality toys mention they are free of these things, and will also be carefully designed so that it doesn’t have bits that can be chewed off and accidentally eaten. The rule of thumb is that if you can chew off a bit that’s bigger than a pea, don’t buy it.

The very best dog toys have a guarantee that the material is non-toxic, non-abrasive and non-splintering. It should be tested for toughness and have a lifetime guarantee. Also, the best materials are radiopaque so that if your dog is able to destroy it and swallow a bit of it, the material will show up on an X-ray.

Finally, if your pet does manage to eat the squeak or chew it up, talk to your vet and get it checked out. Appu is just a year old, neutered, vaccinated and super healthy. This big puppy boy is very friendly, active and playful. He wants to be a companion dog and a member of the family. He’s also good at barking, and will perform guard-dog duties. Interested adopters must telephone and make an appointment. Call SPCA Penang (04-281 6559), Jalan Jeti Jelutong, 11600 Jelutong, Penang, and visit https://spca-penang.net. 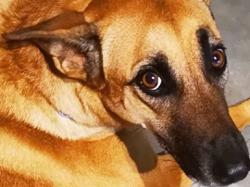 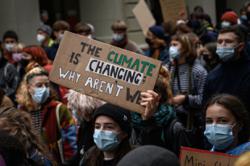