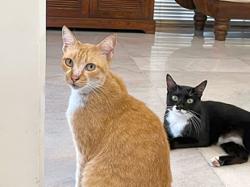 Thriving at Cat Beach in Penang, Honey Bear taught the writer so much about love, kindness and the real joy that is possible between cats and humans. Photo: Teviot Fairservis

Do you have an interesting story about your pet that you would like to share with readers? We’d love to hear from you. Tell us in 600-900 words, with 3-4 photos (in JPEG format, file size about 1MB, captioned). There is no payment for stories, and we reserve the right to edit all submissions. Send your story to: lifestyle@thestar.com.my with the subject "My Pet Story".

A tiny pure white fluff ball. That was my first impression of Miss Honey Bear.

Way back in 2010, I was visiting the island of Langkawi. At midnight one night, a friend knocked on my door. She had been driving home in the dark and had nearly run over a cat family crossing a highway, but happily stopped in time.

The mumcat and other kittens fled into the jungle. But one tiny kitten stood frozen and terrified in the headlights.

My friend found a shoebox in her car, picked up the kitten and brought it to me.

So tiny – the kitten fit in the palm of my hand. I was writing an article about the plight of polar bears – she looked like a tiny baby bear.

For the next 12 years, that kitten was my closest companion.

Over time, her fur deepened into a lovely honey colour. She became my Honey Bear.

If Honey Bear had not thrived at Cat Beach, the sanctuary probably would not exist. But she did. That told me that founding Cat Beach was the right thing to do.

Hundreds more cats have been saved and sheltered over the years because of Honey Bear.

Every penny I have had since co-founding Cat Beach in 2014 has gone to the care of the homeless rescued cats. I sold my apartment in Honolulu, Hawaii, and most of the proceeds went into developing this special No Kill, Non-profit, Cats Only sanctuary.

The joy that this special cat, Honey Bear, brought into my life has made every penny worthwhile.

It was because I could not leave Honey Bear behind that I returned to Malaysia many times, eventually bringing her and seven other rescued cats on a ferry boat ride from Langkawi to Penang island.

In Penang, I was introduced to Barbara Janssen who became my mentor and close friend. A German expat, she had founded 4PAWS, a shelter for rescued dogs.

In our long talks, she told me that when a call came in about cats in trouble, she would take them to a fisherman, Mr Nana, who was caring for cats on the Teluk Bahang beach.

I visited many times and learned about the need for resources and higher standards of care beyond what the local fishing community could muster.

I ended up living with 40 cats in a rented house.

Mr Nana already had about 60 cats at the beach.

Together, the three of us decided there was a real need to co-found a No Kill non-profit sanctuary where rescued cats could go.

Today, there are about 300 cats and kittens residing in and around the sanctuary.

Cat Beach has more than reached its “capacity-for-care” and yet not a day goes by without another call to help a cat in trouble.

Cats can be great teachers. Thriving at Cat Beach, Honey Bear taught me so much about love, kindness and the real joy that is possible between cats and humans.

Dear Honey Bear recently passed away. I think most cat lovers will understand how deep the love and the heartbreak can be. But she leaves a legacy of hope for many other cats.

Honey Bear’s legacy is the beautiful sanctuary we co-founded in the fishing village of Teluk Bahang on Penang island – Cat Beach Sanctuary. 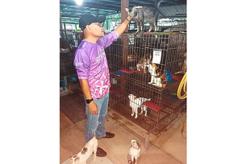