A shoreline that was once a dog beach is now gone and closed because of erosion on Lake Michigan in Evanston, Illinois. Photos: Kamil Krzaczynski/AFP

On a fall night in 2019, Eric Brandt was awoken by the sound of steel rods cracking inside concrete.

"I heard the pings. I know the sound because I used to drill rebar into the top of coal mines," Brandt explained. "I couldn't even imagine what was happening out there."

But Brandt, a 69-year-old former mine worker, was nowhere near a coal mine. He was in bed in his condominium on the shore of Lake Michigan, on the South Side of Chicago, the United States.

Brandt, now a writer, recalled that it was the second major storm that he lived through in four years at his building.This time, crashing waves broke a cement wall in half, and the water washed away a beach adjacent to his 12-storey building.

"They called it a 50-year storm, but it was the second in two years," Brandt said, standing by a new shoreline of giant rocks put down by the US Army Corps of Engineers to protect against further erosion, a problem that has increased dramatically for the Great Lakes over the last decade. 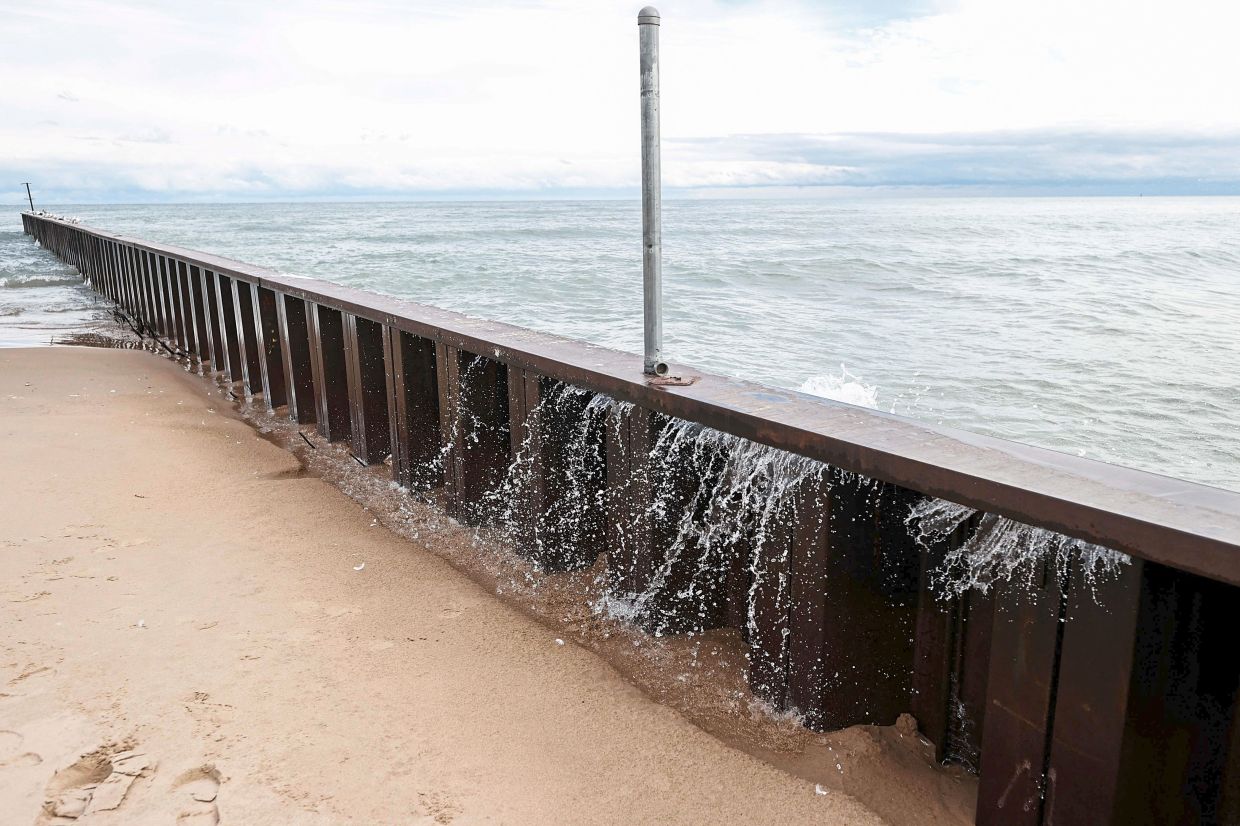 A coastal engineering structure known as a groin is built out into Lake Michigan from an artificial beach to prevent erosion.

The five lakes that make up the Great Lakes, which account for more than 20% of the world's freshwater supply, have always risen and fallen over the decades.

But climate change has now made the extremes much stronger than before, according to Drew Gronewold, a hydrologist at the University of Michigan.

"You have precipitation coming in and evaporation going out," Gronewold said.

"The analogy we use now is a game of tug-of-war. If both teams are equally strong, the rope doesn't move. What happens if they are both getting stronger, and one slips – the rope swings much more quickly than it otherwise would."

Experts say the Great Lakes should be considered as one body of water. 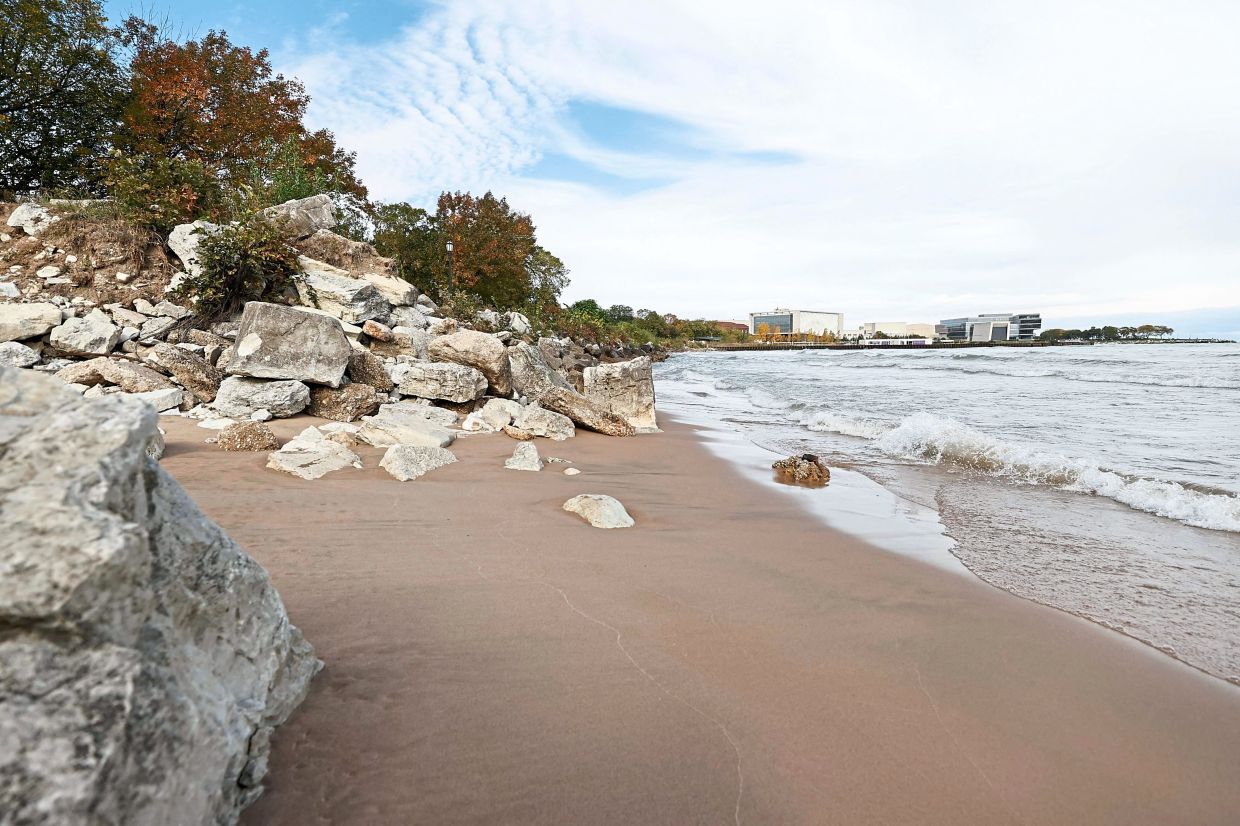 The five lakes that make up the Great Lakes have always risen and fallen over the decades. But climate change has now made the extremes much stronger than before.

"It's important to realise that they are connected. If one lake is going up, they probably all are," Gronewold said.

In 2014, water levels were at record lows and caused alarm in the shipping industry.

Since then, the lakes have risen sharply, reaching highs in the last two years and threatening buildings, beaches and nearby structures.

They have since dipped slightly, but all the Great Lakes remain above the long-term average.

"We've seen this huge increase over the last seven years. Lake levels have come down a bit since last year, but it was a huge swing and was larger than anything we saw over the last 100 years," said Tomas Hook, director of the Illinois-Indiana Sea Grant and professor of forestry and natural resources at Purdue University. 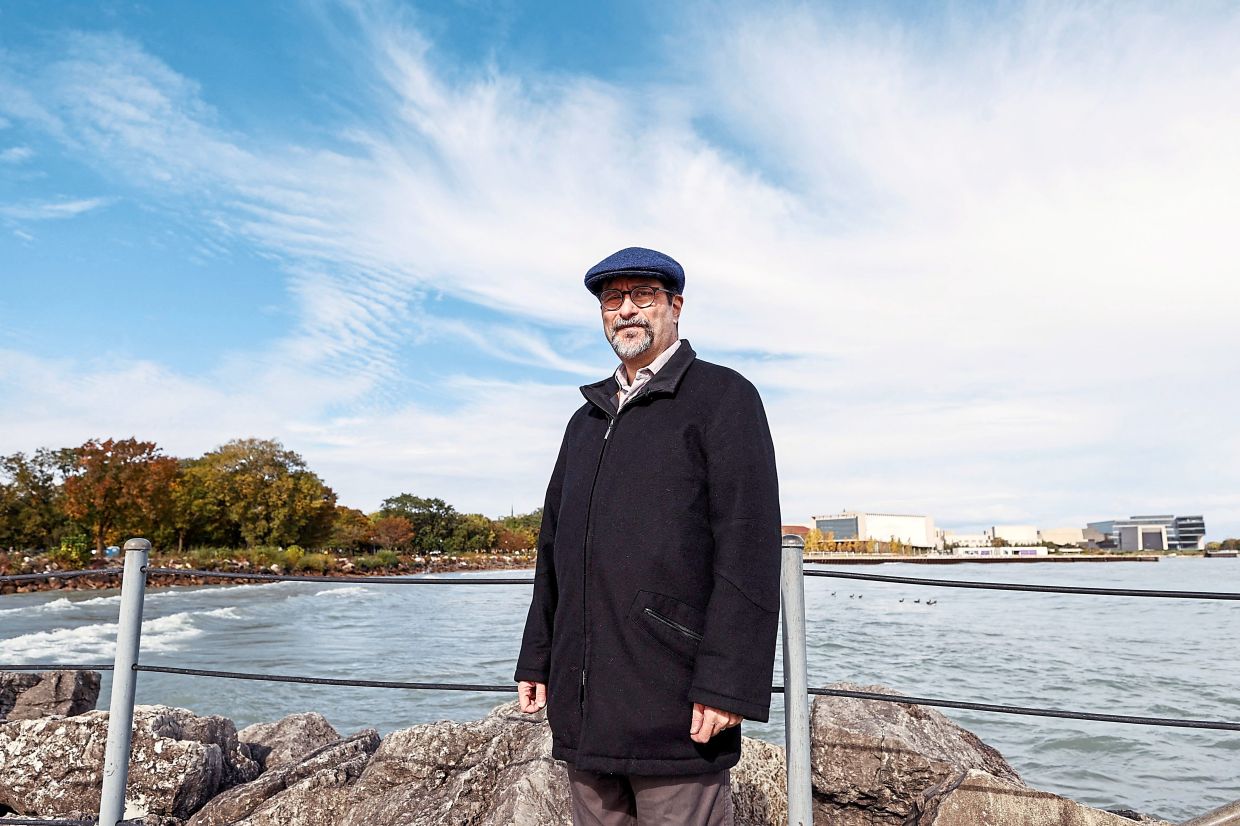 Packman stands on a pier next to a shoreline that was once a dog beach, now closed due to erosion on Lake Michigan.

Todd Rosenthal, a 56-year-old theatre set designer who has lived on Chicago's Lake Michigan shoreline for two decades, says a major 2019 storm "like the wrath of God" tossed cement barriers around and sent water through the walls and windows in his second-storey unit.

He and several neighbours then installed hurricane doors and shutters – which he says is just part of the cost of living on the lake.

"You never can tell. We've had times when the lake has been pristine and calm, and within five minutes you could see whitecaps," Rosenthal said.

His building, 20 miles (30km) north from Brandt's, also lost a protective cement wall and had adjacent beaches washed away by storms in the last two years – the sand now replaced with large, protective rocks.

"Some people moved out of the building because they couldn't take the constant pounding," Rosenthal said. 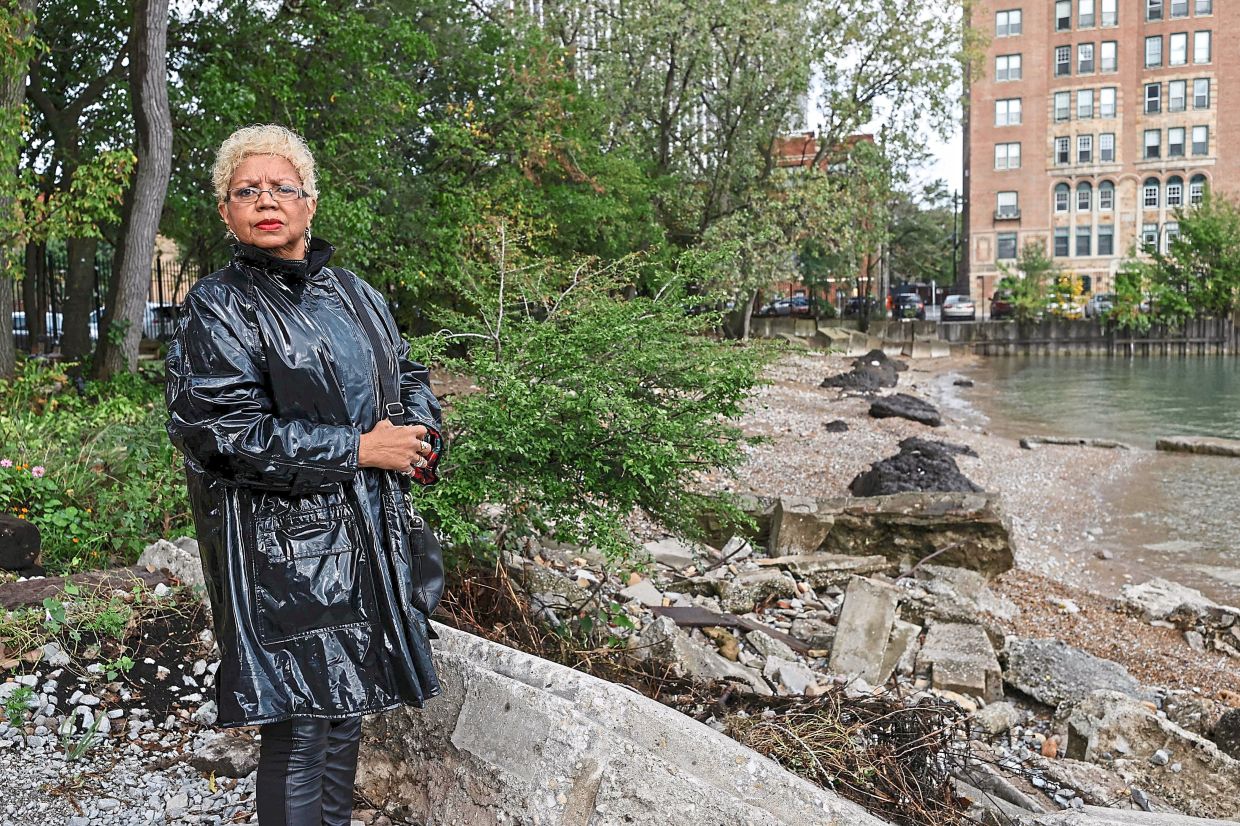 Slaughter standing outside her highrise apartment building impacted by erosion from Lake Michigan.

That could also be the future for Jera Slaughter, a 71-year-old retired Amtrak worker on a fixed budget who has lived in the same building as Brandt for 44 years.

She fears extra costs will drive her and her neighbours out.

Since 2019, residents at the 12-storey, 70-unit building on Chicago's South Shore have spent US$450,000 (RM1.87mil) on damage repairs – and have little money left for routine maintenance and preventative measures.

"We love this building, but at some point we won't be able to afford it," Slaughter said. "We take it moment by moment because we don't know what this year is going to bring."

"One of the issues, especially with Lake Michigan, is that we're seeing the effect of climate change with more intense storms, more flooding, and there's a lot of uncertainty with what will happen with the Great Lakes in the future," said Packman.

"Beyond being a critical water resource for a big section of the country, the Great Lakes also are an economic engine for the country.

"The future is going to be different, and in some sense worse. We can and must change our response to be much more effective than it's been in the past," he said. – AFP

From Gaziantep to Glasgow, Little Amal delivers seeds of hope to COP26