Pandemic memorials around the world pay tribute to lives lost

A woman paints a heart on the memorial located in Westminster, Britain to remember those who died in the pandemic. Photo: Victoria Jones/PA Wire/dpa

The coronavirus pandemic has caused unimaginable grief around the globe, as countless people have lost loved ones, family members, friends and colleagues.

As the global death toll from Covid-19 passes five million, many countries are planning memorials to honour those lost.

These range from monuments to memorial forests, sculptures and websites to help people come to terms with their loss, individually and collectively.

London's memorial may be the best known so far. Located in Westminster, the National Covid Memorial Wall is a public mural made up of red hearts and extending several hundred metres along the banks of the Thames.

Families and friends of those who have died have painted the hearts to remember their lost ones. Visitors can walk the length of the wall and listen to audio recordings of their stories. Many members of parliament are now calling for the wall to be preserved as a permanent memorial. Mario Draghi (right), Italy's prime minister, taking part in a remembrance for those whose lives were lost to Covid-19. Photo: Matteo Zandardi/Stadt Bergamo/dpa

There are also plans to create a memorial wall in the Philippines honouring health workers who died during the pandemic. The design has already been approved and the organisers hope to complete the structure, at the National Heroes' Cemetery in Metro Manila, by December.

The memorial will "tell a story about what happened and about the heroism of our doctors and nurses and our personnel", says Carlito Galvez Jr of the national task force against Covid-19, adding that he thought the budget was nevertheless a "small amount" to spend honouring the heroism of frontline workers.

In the United States, more than 600,000 white flags fluttered temporarily in the breeze on Washington's National Mall. The art installation "In America: Remember", designed by Suzanne Brennan Firstenberg, saw relatives invited to dedicate a flag to the person they lost.

In Italy, one of the places worst affected when the coronavirus first emerged in early 2020, a memorial forest has been planted in the city of Bergamo. So many people died there that the city soon ran out of space for the dead, and images of military convoys leaving the city carrying coffins shocked the world. The country had not seen so many deaths since World War II.

A proposed memorial to health workers who died in the pandemic in the Philippines. Photo: dpa

For its part, Cape Town has created memorial gardens, with trees with plaques planted in six city parks and cemeteries to symbolise the cycle of life.

"The trees that we planted today... are living memorials to the many loved ones we've lost. We remember them not only today, but as these trees grow and thrive it will be a testimony to their lives," says mayor Dan Plato.

Residents tie green ribbons around the trees in memory of a loved one. Viewed from the air, these form a circle.

Plans are under way to create several large monuments in Latin America. In Uruguay, architect Martin Gomez Platero has designed a memorial for the waterfront in Montevideo, with a footbridge connecting a 40m-wide platform in the sea to the shore. In the middle is a hole through which visitors can look down into the water.

"The memorial is intended to create a collective consciousness and remind us that humans are not the centre of the ecosystem... as we will always be subordinate to nature," the project description says. 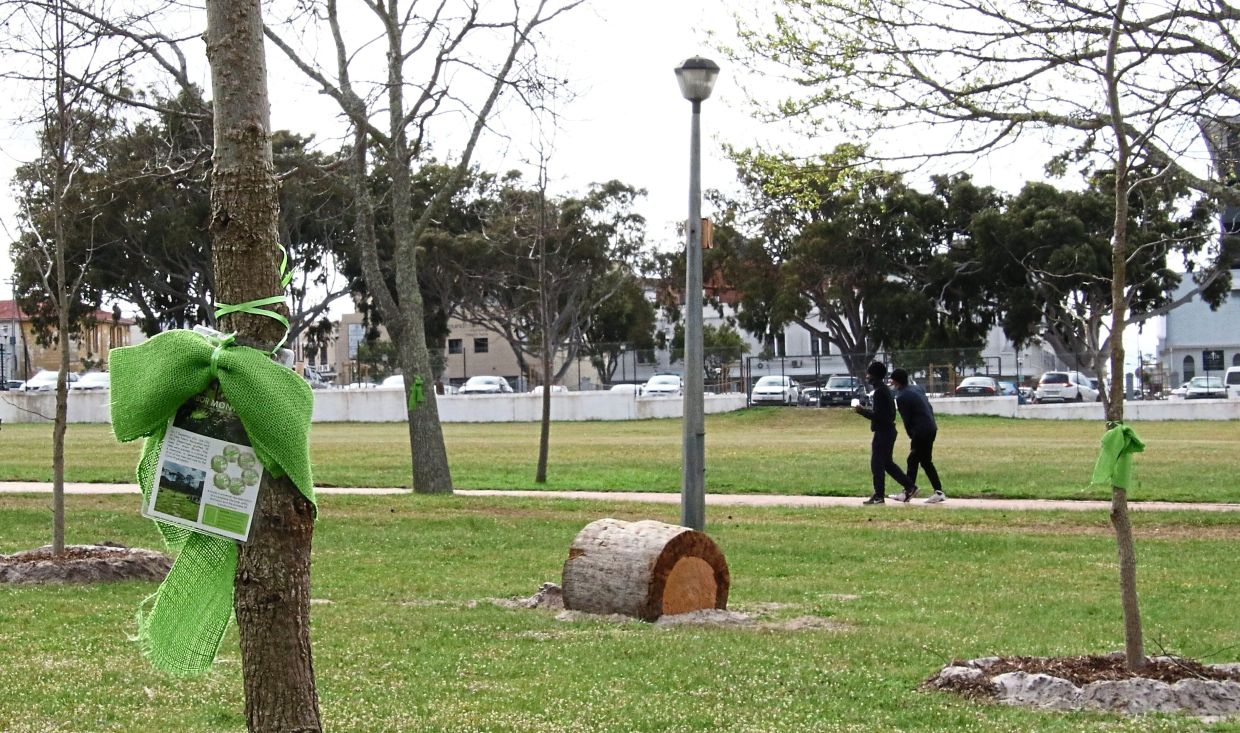 In Brazil, Rio de Janeiro's In-finito memorial, designed by architect Crisa Santos, aims to address the pain of many relatives who were unable to say a proper goodbye to their loved ones due to the pandemic.

"The family no longer sees the body of the loved one who has come to the hospital. They only see a coffin or an urn," the architect says, according to Gazeta do Povo newspaper.

The sculpture, which is made up of six parts and extends some 26m, bears the victims' engraved names on it and is intended to close this gap in the mourning process, Santos said.

In Sao Paulo, a time capsule sculpture has been created so people can share their condolences or personal memories. These are sealed in the base of the monument as a message for future generations.

In some countries, governments are adapting monuments that have already been built, such as in the Indian city of Goa, where a monument originally built to memorialise Spanish flu victims in 1918 has become a memorial for those lost to Covid-19.

The memorial had fallen into disrepair and there had even been at one point plans to pull it down to make way for a highway, according to the Hindustan Times. But as people began to pray for their loved ones there in summer last year, the memorial was restored.

In Austria's Styria, however, a modern sculpture is planned. Three memorial sculptures are to be erected in Graz and Leibnitz by the end of the year, with concrete walls representing the need for social distancing, a sinking sphere symbolising the invading virus and a light and steel sculpture.

Madrid also plans to build three monuments. One is to be created downtown, with an eternal flame burning in a steel sculpture in front of the Cibeles Palace, with the dedication: "In our heart your flame will never go out."

The Dutch have built a bronze sculpture to commemorate the hard work of caregivers as well as those who lost their lives to Covid-19. The statue by artist Kees Verkade depicts a man and a woman releasing birds into the sky. Placed in a park in the Dutch town of Isterwijk, it was inaugurated by Princess Margriet and is supposed to symbolise the dawn of a new future. – dpa

4 ways your dog shows fear
Drivers see red when others wait more than 3 seconds at a green light
Why we should value flying insects
Lap chickens: A different kind of pet
Curious Cook: Bird flu may be forever
4 amazing rescue dogs and their inspiring stories
Dear Thelma: I'm called names and bullied for being overweight
Dog Talk: Some dogs dislike men, others dislike women – how can they tell who's who?
1970s KL bungalow turned into relaxing modern home with industrial vibe
Preparing your child with autism to enter adulthood