I met Adrian Foo by chance one day about eight years ago. I was in the Gardens Mall. l was on the wrong floor and at the wrong end of the mall too.

Something caught my eye as I looked around. It was the name of a shop – Art Muffin.

I was recently interested in art and was experimenting with oil paints.

I ventured into the shop and met Adrian Foo, the owner who also gave art classes.

He was surprised to see a middle-aged Indian lady enter his shop. Being a polite person, he met me and filled my curiosity about his business.

When I enquired if I could take some lessons from him, he asked me what I wanted to paint.

Immediately we arranged for my first class on a Friday at 11am. He told me not to bring anything for the first session. He actually never expected me to keep the appointment.

I showed up punctually that Friday, to Adrian’s surprise. From then on, my journey in art with him began – with him challenging me initially, and later with me challenging him.

The first class was on drawing a portrait – getting the eyes, nose, mouth and ears proportionately placed on a face. What Adrian did not know was that I was serious and diligent, and had practised a lot at home as I did not want to waste time doing what I could at home in class.

From sketching and colouring, we went on to watercolour, from paper to canvas. He introduced me to acrylic paints; I did not even know how to clean the brushes at that time.

From portraits we ventured into sceneries, fish, flowers and to painting batik images on canvas where I found my niche. Now it was my turn to challenge him. I did a large painting of two sarongs on canvas at home and told him about it. His reaction was very discouraging. He thought it would be a bad imitation. So, I carted it to his shop and he was astonished at what I had painted. Nevertheless, he helped me to improve on it.

Adrian’s command of the English language was poor, which meant that much was lost in our communication. However, talking to me in English gave him an opportunity to improve his spoken English and eventually he was comfortable conversing in English.

We chatted a lot and I got to know about him and his family. He lived in Klang, originated from Sarawak and studied Art and Design in One Academy in Kuala Lumpur, worked as a designer and later went into manufacturing artefacts and running art centres. He had trained many young adults to be art teachers and helped them set up their own art centres.

I went on to have a solo exhibition in early 2018 and a joint exhibition with Adrian and some of his former students in mid-2018.

Some weeks ago, my friend and curator of the art gallery Marcus Hing called me with heartbreaking news that Adrian Foo had just passed away, a victim of Covid-19, leaving behind his wife and two pre-teen children. He was only 50 years of age.

How tragic that Covid-19 has robbed a family of their husband and father.

Adrian’s legacy is large and tangible and alive in my paintings, both past and future.

He was a godsent to me and that day when I was on the wrong floor and wrong side of the mall, it was designed by God for me to meet my art teacher and mentor.

May you rest in peace, Adrian Foo. 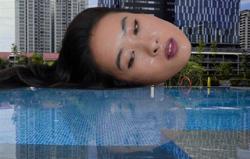