All Malaysians have a role to play in protecting the environment, says Dr Jane Goodall

We need more people to work on conserving the forest, " says Dr Jane Goodall at the launch of Project Monyet in Kuala Lumpur. Photos: The Star/Norafifi Ehsan

What is the biggest threat to wildlife conservation in the world today? For legendary conservationist Dr Jane Goodall, the answer is simple. We are.

“Humans. We are the biggest threat and the most dangerous animals. But the threats are different in different areas. Sometimes it’s habitat destruction, sometimes it’s hunting. And sometimes, you know, people shoot mothers (of animals) to get babies as pets, ” said Goodall, speaking at an interview in Kuala Lumpur recently.

Goodall, who hails from London, England, is widely known as the world’s foremost expert on chimpanzees. She is probably most acclaimed for her 55-year study of social and family interactions of wild chimpanzees, which she started at Gombe Stream National Park, Tanzania, in 1960.

She is the founder of the Jane Goodall Institute, a conservation organisation with over 19 offices worldwide, and Roots and Shoots, a global youth-based environmental and humanitarian programme.

In 2002, Goodall was named United Messenger of Peace by United Nations Secretary General Kofi Annan, while in 2004, she was conferred the honour of Dame Commander of the Most Excellent Order of the British Empire.

This year, she was listed as one of TIME magazine’s 100 most influential people in the world. 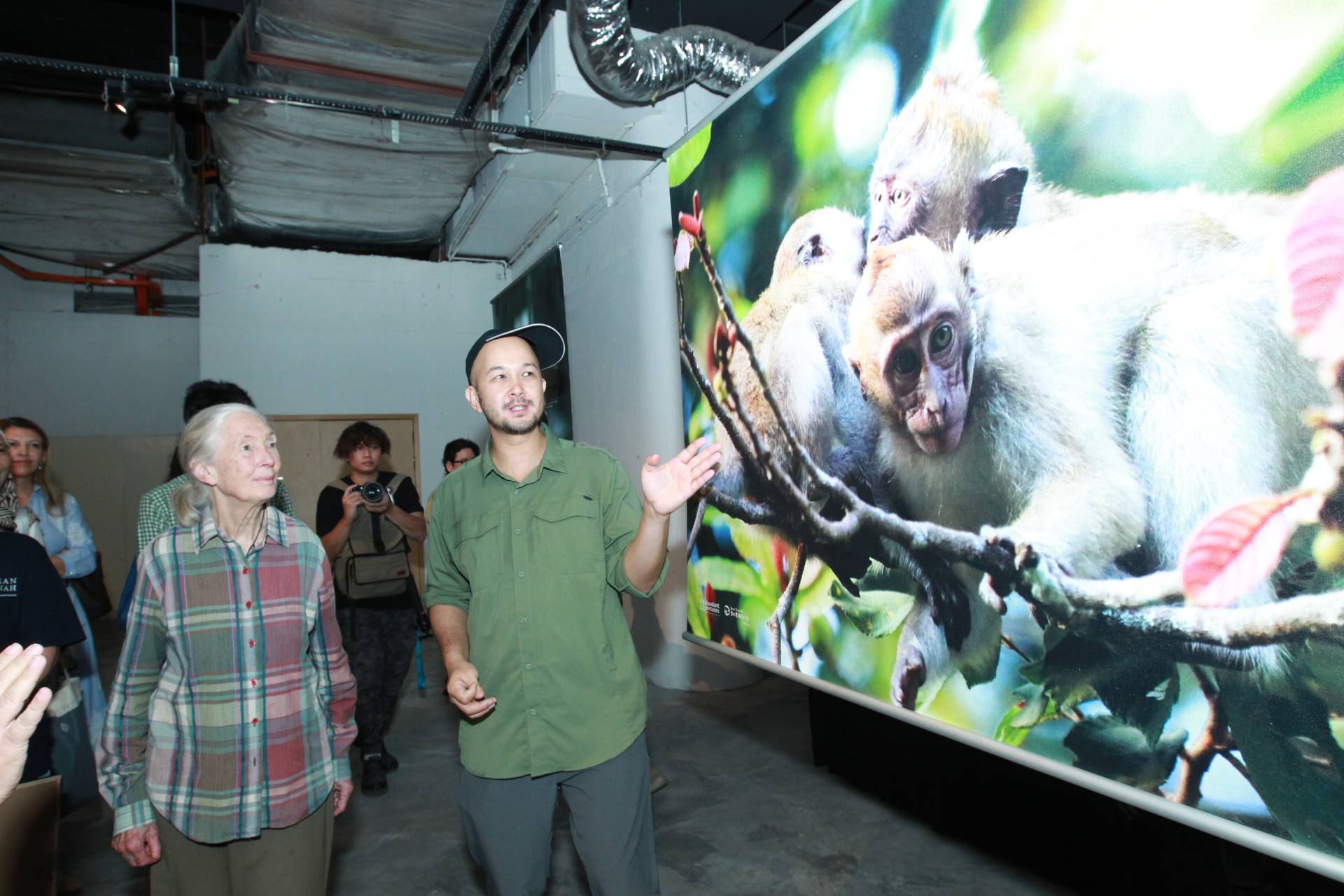 Photographer Peter Ong (right) shows Goodall one of his photographs in Project Monyet.

The good doctor may now be in her 80s, but age has clearly not slowed her down as she continues to travel the world to spread awareness on the environment.

Goodall was in Malaysia for the third time recently, visiting Kuala Lumpur, Penang and Perak.

While in Kuala Lumpur, Goodall officiated the opening of Project Monyet, a photography exhibition on Malaysian primates by local photographer Peter Ong.

In true Goodall fashion, she opened the ceremony by mimicking the call of a chimpanzee.

In a brief opening speech, she spoke out against the habit of keeping exotic animals such as gibbons as pets.

“I think it is a really bad thing to have a gibbon as a pet, ” Goodall said. “Wild animals belong in the jungle, not in people’s homes.”

Asked what she thought about Malaysian conservation efforts, Goodall said she was not an expert on the subject. In fact, part of the reason for her trip here was to learn more about them.

She said, however, that she was glad there was greater awareness among Malaysians about the importance of environmental protection.

“All I know is that there are people working and trying very hard, and there is an awful lot to be done. Almost every primate (here) is endangered or highly endangered. I hope exhibitions like this will encourage young people to go and find out more, ” Goodall said, referring to Project Monyet.

“Go on a first trip to find out how this monkey lives, or that monkey lives. That can be very exciting.” 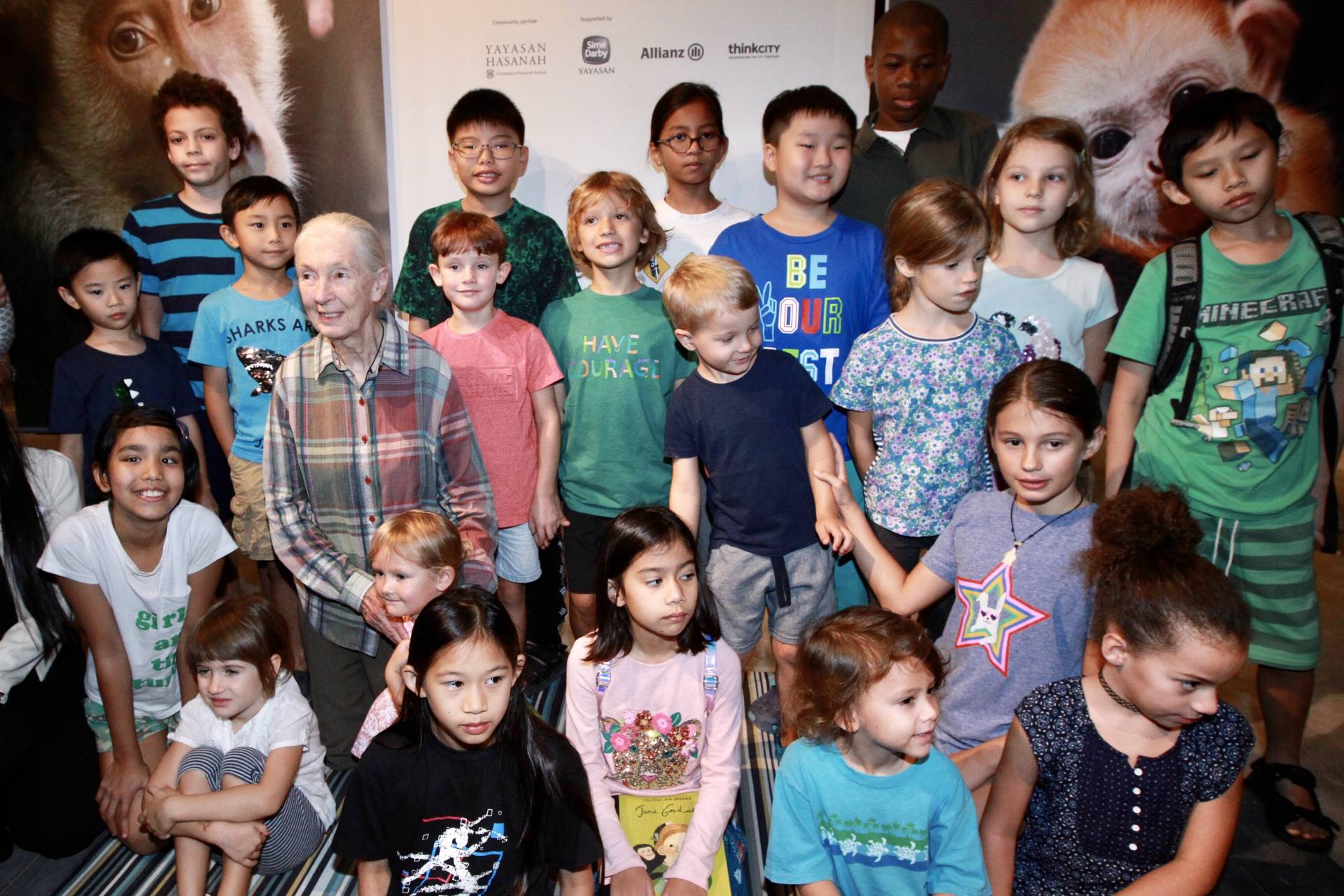 Dr Jane Goodall (centre) with the young visitors who came to see her officiate the launch of Project Monyet.

Additionally, Goodall stressed that it was very important to conserve natural habitats to ensure that our wildlife thrives.

“We need more people to work on conserving the forest, to link up the fragments and recreate the forests to be more like they were because they provide all the water for Malaysia’s central forest spine, ” she emphasised.

Goodall added it was very important for everyone to get involved.

“You can join one of the conservation groups, like the Jane Goodall Institute, or Roots and Shoots. Spread information to people.

“Raise awareness and you will find little places you can make a difference, ” she concluded.