I confess to dining out recently at an Asian buffet restaurant in the town about 50km from my home here in France. I have exhausted my meagre repertoire of Asian dishes several times over and just wanted to taste again other dishes from the past. Overall, the experience was not brilliant because the food was at best a verisimilitude of real Asian food, but it was good enough – and everyone else who came along thought it was great.

But it did make me think about the differences (and similarities) between Asian and French cooking. It would be easy to ascribe the distinction to seasonings and ingredients, but the dish that results from a French cook using just oil, a piece of good meat, flour, salt and pepper will not taste the same as the dish from a Chinese chef using the same ingredients. The French version would probably involve coating the meat with seasoned flour, pan-frying in a thin layer of oil till lightly brown, then finishing off in an oven. The Chinese version would probably require the meat to be sliced, coated in more heavily seasoned flour, and then deep-fried in oil till golden.

All cooking is a combination of biology, chemistry and physics and it is how techniques are applied on ingredients that results in the idiosyncrasies of flavours, tastes, textures and ultimately, styles. Understanding this is relevant especially if you are preparing meals for people with different taste preferences.

There are three factors in managing meals: 1) amalgamation 2) layering, and 3) combination. Amalgamation is when seasonings are steeped or incorporated into the main ingredients, and is usually the simpler and easier method used to flavour food. Layering usually involves applying garnishes and items cooked separately from the main ingredients, such as sauces or other ingredients layered over the dish. Combination is when separate foods, which may be contrasting or complementary, are served together on the same dish or platform.

An example of amalgamation is the use of marinades for barbecued meats. Another would be braising in powerful sauces, and usually requires only one pan or wok. Amalgamation is more often used in Asian cooking as it usually results in stronger, deeper flavours in the main ingredients. Classic examples are char siew red pork, satay, sweet & sour pork, kung pao chicken, curries, etc. The downside of amalgamation is that once the flavours have entered the target ingredients, there is no way to reduce the impact – it is rather like an alloy created by combinations of melted metals and/or compounds. So if you do not like the taste of proteins treated with a marinade, then the only thing you can do is avoid eating it – the flavour characteristics of the proteins would be immutable.

A steak is often layered because the meat is cooked first, after which a gravy is added, either on top or on the side. Photo: Filepic

Layering is probably more a Western tradition. For example, steaks may be cooked in some standard manner and then served individually with one of several different gravies on top, such as onion, blue cheese, red wine, etc. So every dish at a dinner table may have a common element (e.g. steak or grilled fish) but each dish would still be distinctive due to the layers of different gravies applied. Quite often, the layering is also controlled by the diner as gravies may be served in separate jugs for use at the table. A pizza is also a construction based on layers. Many garnishes such as spring onions, parsley, pepper, and other seasonings are also examples of layers.

Combination is how variety and/or bulk are introduced into plates of food. At the simplest level, staples such as rice, noodles, bread, potatoes, etc, may be introduced to form the bulk of a dish. But combinations can get quite complex once legumes, proteins, salads and other ingredients are also involved. An example might be paella, which can include fish, clams, langoustines, chicken, shrimps, peppers, vegetables, tomatoes, saffron, wine and Bomba rice. Other common combination items would be beans, peas, roasted/steamed vegetables, mashes, etc, to accompany a piece of protein. Amalgamation and layering commonly also apply when preparing combination food items.

Understanding how dishes are cooked can make one a better cook, especially if you are cooking for several people, perhaps a dinner party.

All cooking involves the re-arrangement of carbohydrates, fat and/or protein molecules under heat, unless the food is eaten raw or treated with compounds such as salt, sugar, acids, alkalis, yeasts, bacteria/fungi, enzymes, etc. The structure of carbohydrates, fats or amino acids (from proteins) are “cooked” by disassembling, then re-assembling them in different configurations, or introducing new binding compounds, or usually, all of the above. Good food is therefore the outcome of countless chemical interactions between biological ingredients that results in compounds which stimulate our taste senses. Where required, energy to initiate such chemical interactions is usually delivered via the physical application of heat.

But not all good food requires cooking or heat. A nice salad may be raw leaves sprinkled over with a blended dressing of vinegar, oil and honey – this is a classic example of layering.

Flavours can therefore be managed by controlling the amount of chemical activity during cooking, though it might be even more important to manage the type of chemical reactions. Not all ingredients combine well together – fried fish and bananas would probably not work out well.

So it makes sense to ensure that ingredients fit well and in the right proportions before cooking, something easy to do with the right recipes. This sounds like common sense but I am sure you have eaten dishes which tasted simply wrong, because of overuse of an ingredient – an easy mistake to make, especially when following a recipe blindly. An example are American cake recipes – they are always far sweeter than necessary.

As an aside, a tricky recipe is coq au vin, which many people think means chicken in wine. In fact, a “coq” is a French cockerel and it is a pretty tough bird (a “poulet” would be a normal chicken). As such, traditional recipes for coq au vin call for long cooking periods, which disintegrates normal chickens into mush. But the sauce needs a long time to cook and thicken so if you are making coq au vin with normal chicken, consider taking out the meat for 20-25 minutes and return for the last 10 minutes after the liquids have thickened. This dish is a classic amalgamation of the flavours of gamey poultry with wine and herbs.

Unless you have a need for deep flavours to be amalgamated into an ingredient (perhaps via a marinade), consider ways where it is feasible to apply flavours as layers. One downside of layers may be the need to cook a separate sauce or gravy to layer over food but this may actually be easy. For example, gravy for steak can be made by deglazing the frying pan with wine and stock, and then evaporating away the liquid till it thickens. You can make separate gravies by dividing the deglazed liquid and thickening them separately with onions, mushrooms, blue cheese, etc.

Layering can also introduce distractions and colour to a dish. If a dish ends up a little controversial (it happens to all of us), one way to save the day might be to add chopped sweet red onions, peppers, ginger, other herbs or even cheeses as additional garnishes.

Combination items can bring out the best in the main dish components. A suggestion is to place peeled sweet potatoes on foil, shower with dried chilli flakes, drizzle with olive oil, wrap the foil over tightly and place in an oven at 180 to 190°C for 40 to 80 minutes until the sweet potatoes are soft when pressed. This item incorporates sweetness with a touch of chilli heat, plus some light flavour of verdant olive oil – and you can serve this with just about anything. 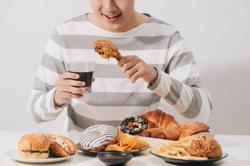 Curious Cook: Food we crave for