'Do something now:' mourners demand action after US school shooting Mendoza (right), the grandmother of Amerie Jo Garza, who died in the mass shooting, mourns at a makeshift memorial outside Uvalde County Courthouse in Uvalde, Texas. Photos: AFP

A distraught Texas grandmother of a girl killed in the massacre in Uvalde pleaded for urgent action by US authorities to prevent future school shootings, as the country plunges again into the roiling debate over guns.

Ten-year-old Amerie Garza - a fourth-grader who loved her classes, drawing, and playing with clay - was one of 19 children murdered by a teen gunman at Robb Elementary School in an act of evil that has forever changed this small Texas town.

"My granddaughter was in there. She was an innocent little girl, loving school and looking forward to summer," Dora Mendoza told reporters after paying respects at a makeshift memorial outside the school.

But the 63-year-old, who lived with Amerie and saw her at an end-of-year ceremony Tuesday just hours before she was killed, quickly made clear she wanted US officials such as President Joe Biden and Texas Governor Greg Abbott not to shy away from working together on reforms. Dozens of relatives, students and friends have been placing flowers, stuffed animals, candles and jewelry at a second memorial in Uvalde's town square.

Biden, who is due to visit Uvalde on Sunday, and Abbott are polar opposites regarding restrictions on gun sales. Like many in the Democrat versus Republican divide, the two also differ on the path to take to curb the nation's surging gun violence.

"They shouldn't just wait for... tragedy to start," she said.

"They need to do something about it. They need to not forget us, the babies... Don't forget them, please," Mendoza, speaking in a mix of English and Spanish, pleaded through her tears.

"Do something about it, I beg you. I beg you!" she wailed. "All the cries and all these little innocent babies... we don't know what they went through."

Amerie's "abuela" was among several Uvalde residents who came to pray or leave flowers at the school memorial, where 21 small white wooden crosses have been erected bearing names of the 19 children and two teachers who were killed.

Among the mourners was Yaritza Rangel, 23, who brought her four children to lay flowers. 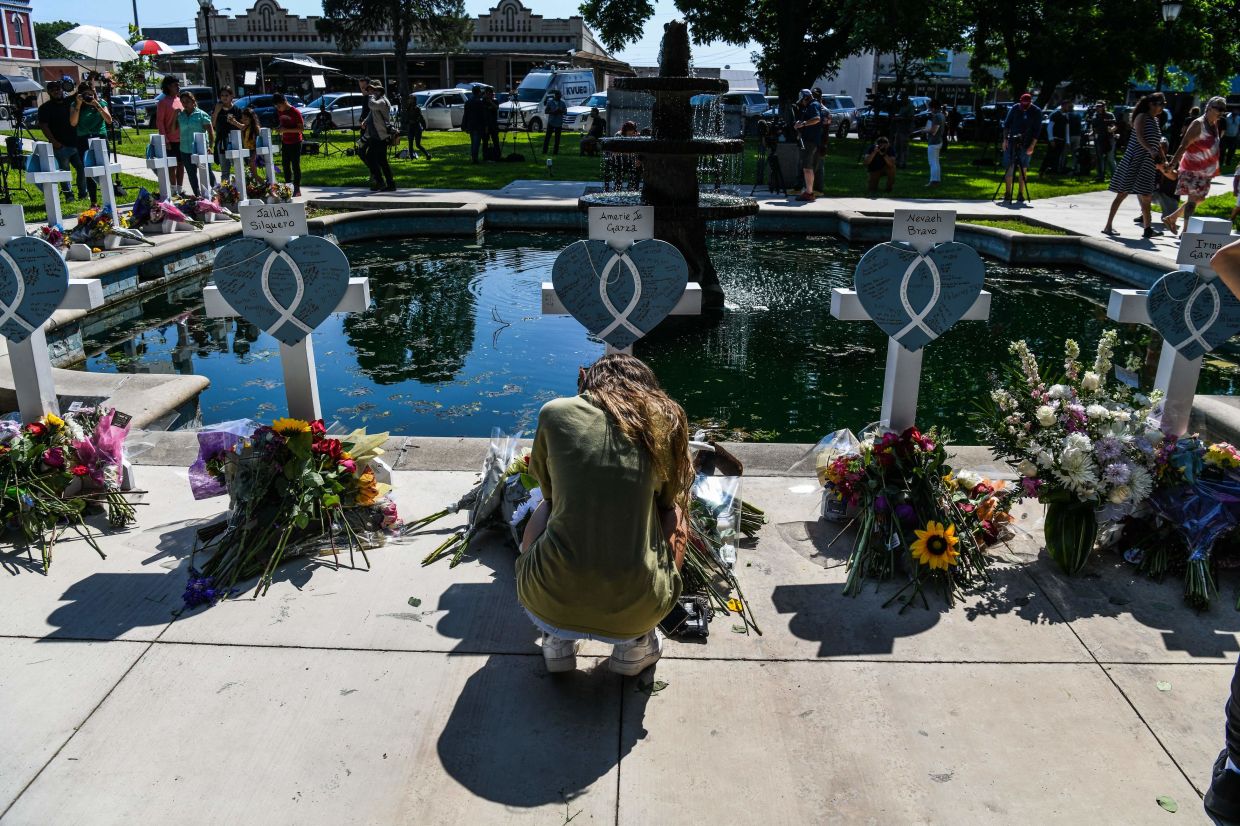 A relative of Amerie Jo Garza, who died in the mass shooting, mourns her untimely death. Texas police faced angry questions over why it took an hour to neutralise the gunman who murdered 19 small children and two teachers.

'What if it happens again?'

"We're all hurt. We never thought this would happen here," where most town residents know each other, she said.

But Rangel, while avoiding politics, did point to three reforms she wants enacted: an expansion of background checks for gun purchases, tightening of security in schools, and raising the minimum age for buying firearms.

"It doesn't make sense," she said. "You have to go and wait until you're 21 to go and buy alcohol. Why are they letting 18-year-olds be able to buy rifles?"

Rangel, whose young nephew was in a Robb Elementary classroom that the shooter tried but failed to enter, is now worried about her own children and says she has been traumatized by the attack.

Her son will be going to elementary school soon, and the prospect of violence keeps her awake at night.

"What if it happens again?"

Dozens of relatives, students and friends have been placing flowers, stuffed animals, candles and jewelry at a second memorial in Uvalde's town square, which has become a gathering place for residents to unite in their anguish.

Like the first memorial, it features white crosses with the names of the victims. Meghan Markle, the wife of Britain's Prince Harry, visited the site on Thursday.

The 40-year-old Duchess of Sussex - wearing jeans, a t-shirt and a blue baseball cap - reached down with her head bowed and placed flowers between two of the crosses.

Some mourners added messages on the crosses, including a young girl who wrote one for victim Jackie Cazares.

Girl with the wicket game: Malaysian cricketer hopes to inspire girls to play