On social media, Amber Heard is a punchline, a caricature, a diversion, a meme. The actress says she was physically, sexually and emotionally abused by her ex-husband Johnny Depp, and the internet is laughing.

Heard took the stand two weeks ago to defend herself against a defamation lawsuit filed by Depp for an op-ed she wrote in 2018 calling herself a "public figure representing domestic abuse". Social media users called her graphic testimony her "worst performance". There are YouTube compilations of her most emotional moments. She's been ridiculed for an incident in court when she appeared visibly afraid. A TikTok trend mocks comments she made about a time she claims Depp hit her. One video has more than 22 million views.

The loudest voices on the Internet may not believe Heard, but millions of women have had experiences like the ones she describes. When people mock her, experts say they're inadvertently laughing at every person who has said they are a victim of abuse. The one in four women who have experienced intimate partner violence are watching, listening and weighing the cost of voice.

"In the commentary, it's almost as if people are forgetting that this is real life, that this is not a show that we're all watching," said Laura Palumbo, communications director at the National Sexual Violence Resource Center. "Many victims of domestic violence and sexual assault will go into a courtroom at some point and have an experience that is largely outside of their control, in a setting like this."

Experts say public reaction to the defamation trial is triggering survivors and perpetuating stereotypes that muddle the cultural conversation on domestic violence, which still hasn't had its own #MeToo moment. Experts suspect the case will contribute to silencing victims who worry about being disbelieved, who on much smaller scales must consider the judgment and attacks they're willing to endure if they speak up.

Many forms of violence

The public's derision of Heard, experts say, exposes misunderstandings about the dynamics of intimate partner violence and underscores the perfection the public expects from people who say they've been abused.

"There's such a strong desire in the public discourse for her to be the villain, for her to be the example of the fact that there are victims who have ulterior motives, that there are victims who are not telling the full truth. It doesn't seem like there's a lot of folks thinking critically or wanting to understand the nuances of abuse or of unhealthy relationships," Palumbo said.

On TikTok, the hashtag #JusticeForJohnnyDepp has 9.9 billion views. A similar hashtag for Heard has only 37 million. Searches for Heard on the platform also bring up #amberheardcancelled, #amberheardsucks and #amberheardistrash.

People have been disparaging Heard since she first accused Depp of abuse in 2016.

Depp has maintained Heard was the aggressor in their relationship, and he claims her Washington Post op-ed harmed his reputation and career. In it, she wrote how she "felt the full force of our culture's wrath for women who speak out."

"Ironically, the op-ed that led to the defamation trial was her talking about the consequences she faced speaking publicly about the abuse she said she experienced by someone who was so beloved and respected and connected in Hollywood," Palumbo said. "Now we see that playing out in a very extreme way."

Contempt for Heard worsened during the trial. Experts in domestic violence say that while testimony suggests both parties behaved violently, a combination of Depp's star status and the fact that he testified first may also be influencing public sentiment in his favour.

Palumbo said she would have expected people would tread more lightly in their criticism of Heard, given that she was already found to be credible. In a separate libel lawsuit Depp brought against a British newspaper that called him a "wife beater," a London judge ruled the paper's reporting was "substantially true."

Experts say abuse is characterised by an imbalance of power, and while domestic abuse is typically defined by a primary aggressor who has more power, they say there are many forms of violence that can occur within a relationship that aren't about power or coercive control.

Failure to recognise these dynamics is likely fuelling disdain for Heard, and it's also why law enforcement and the criminal justice system can struggle to handle domestic violence cases.

"Within an abusive relationship, where there is harm being perpetuated and harm being experienced simultaneously, it can be difficult for folks to get help because it doesn't fit the cultural idea that there's a clear victim, a clear villain and that there's someone who we should be helping and supporting and there's someone that should be locked up and thrown away," Palumbo said. "There's often a lot of support that both parties need."

Christine Murray, an expert in domestic violence and director of the Center for Youth, Family, and Community Partnerships at the University of North Carolina at Greensboro, said public perception is heavily influenced by personal bias.

"People tend to make assumptions about a person based on what they know about them. A lot of people would say, 'That person is so charming. They're a leader in the community. They could never be abusive.' Just like for victims or survivors they might say, 'They're so educated. They're so intelligent. How could they become a victim of domestic violence?' Our feelings are filtered through our biases and assumptions, and the stereotypes and the attitudes that we hold."

The truth is that domestic violence is a pervasive social problem that cuts across race, age, income, sexual orientation, religion and gender – in terms of both victims and perpetrators. Domestic abuse can be physical, sexual, emotional, economic and psychological. People want to think of all perpetrators as monsters, but perpetrators are not always easy to spot, and sometimes they are the people we love, whose abuse doesn't always begin right away.

When Heard was asked during the trial why she remained in the relationship, she said that "He was the love of my life. But he was also this other thing. And that other thing was awful."

During the trial, it was revealed that Heard used illegal substances. She admitted hitting Depp, and jurors heard recordings of her berating him.

"What we're finding is that Amber Heard, now that we know she isn't perfect, isn't being taken seriously or, even worse, is being accused of lying from the beginning. I find it really disturbing," says Kjerstin Gruys, a sociologist at the University of Nevada, Reno.

Experts say one of the most harmful aspects of the public's scorn is the underlying assumption that character flaws make Heard undeserving of empathy.

Experts say everyone needs more awareness about domestic violence – whether because they are making a decision about a protective order, deciding a civil suit or helping a victim in their community.

Turning Heard into a joke has a social cost. Millions of people have experienced intimate partner violence and cultural stigma can keep many from disclosing it. There are survivors in every community, and they are witnessing Heard be torn apart, sometimes by their own friends and family.

"Survivors are always watching, survivors are always listening," Palumbo said. "They're always in the room, and they're hearing how we respond, and for them, I think the big takeaway in this case is, 'Wow, in coming forward, there's so much to lose'." – USA Today/Tribune News Service 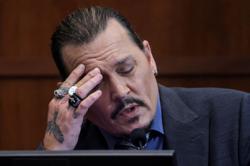