Valentine's Day: Love binds them together

Valentines Day for Lim and Goh will probably centre around food, although for the couple, love is something that happens 365 days in a year, and not just on Feb 14. Photo: Calvin Goh

One thing that binds Calvin Goh and Lim YiLing, both 33, together is food. Even after six years of marriage – and two children aged four years and 10 months – what keeps their romance alive is food.

“In fact, our relationship revolves around food: I proposed to her (six years ago) by cooking a meal for her during a staycation, ” says Goh, a sales engineer. “And before the kids came along, I would always be churning out new dishes for her to try. She would also read up blogs on new, up-and-coming restaurants or cafes for us to visit, ” he says.

“When we were dating, she would blog about food and I enjoy photography, so I would take pictures of the food and she would write about it, ” he adds.

“We’re the kind of couple that takes photos of the food before we eat... and yes, the camera eats first, ” says Lim, and both of them laugh.

So it isn't surprising at all that Valentine's Day for the couple will probably centre around food, although for them, love is something that happens 365 days in a year, and not just on Feb 14.

Goh and Lim, who met in college and started dating in 2007, say making their relationship work is "all about teamwork”.

It can be challenging, they admit, especially since the duo are currently both taking their MBA at Inti International College Subang, and in Goh’s case, also working full-time outside the home.

Lim, a full-time housewife, looks after their children during the day and when Goh returns from work, he spends time with them so that she can take a break.

“We usually fill each other’s shoes. When we see the other occupied, we’ll take the initiative to do what needs to be done, such as when the cooking needs to be done, either of us will step in to do it when the other is busy, ” says Goh, adding that both of them love to cook.

“Studying together, we’re also very much a team – we exchange insights we learn from our classes and also support each other when we need clarification on topics discussed in class, ” he says. 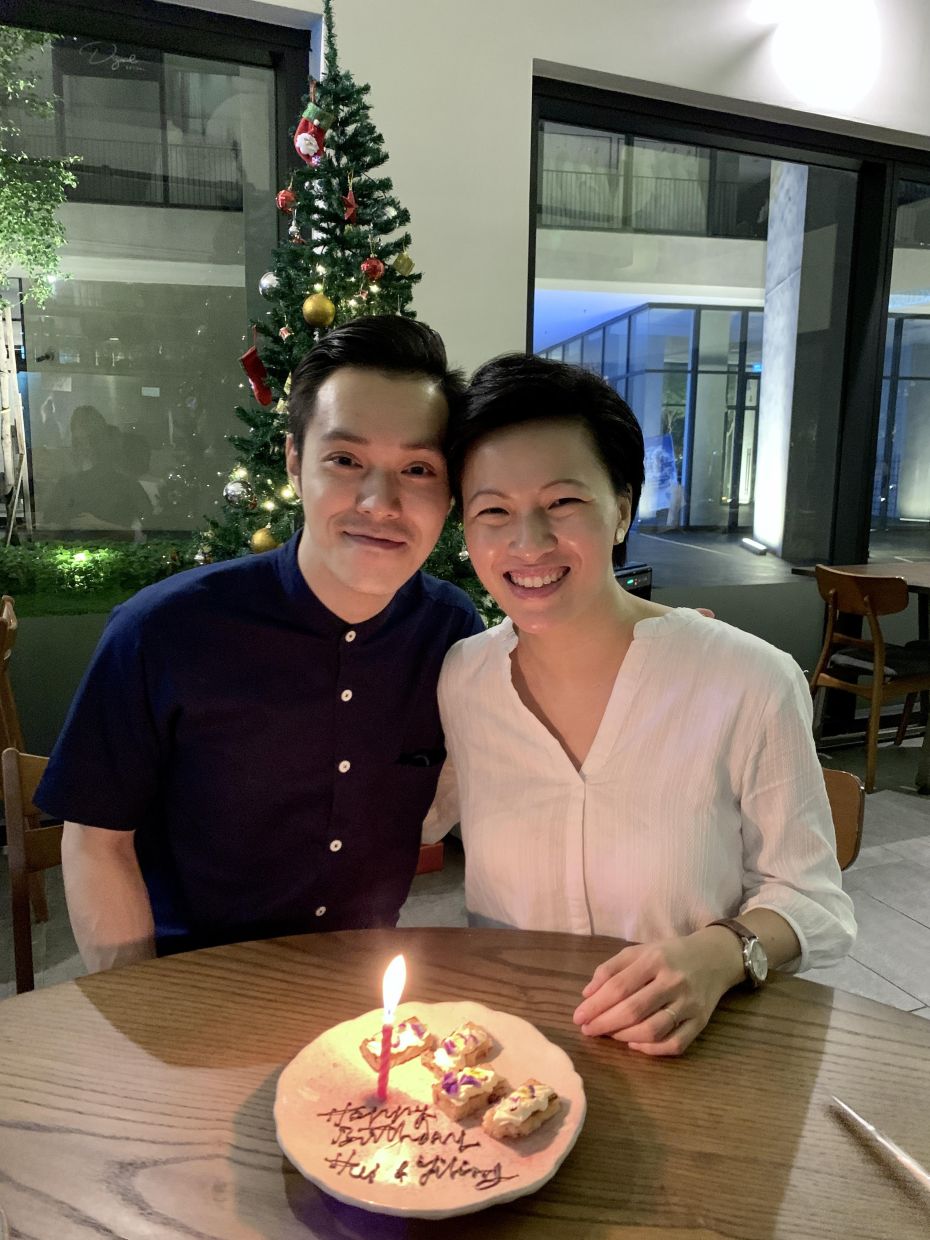 The couple admit that they’re both very different but their personalities and interests complement each other. Photo: Calvin Goh

The couple admit that they’re both very different but their personalities and interests complement each other.

“Before the kids came, when we went on vacations, I would look for activities that we could do, while YiLing would chill and read a book at the resort, ” says Goh.

“Calvin would be saying: ‘where shall we go?’ or ‘let’s check out this place”, he’s an active person who enjoys motor sports and mountain biking, ” says Lim.

“While YiLing is the kind of person that likes to spend time alone, even watching a TV series by herself so that nobody will disturb her, ” says Goh.

The couple admit they rarely watch TV together because both enjoy different genres.

“The only type of shows we watch together are about – you guessed it – food!” the couple say in unison.

Goh and Lim’s love have stood the test of time: they courted for eight years before getting married, and were also in a long-distance relationship for three years while Goh was studying in the United States.

“I think it’s mostly about trust and giving each other space, ” says Lim.

“It wasn’t easy because of the time zone difference. In KL, it’s 8pm, but it’s 8am for me so usually, when I call her, I would be walking to the campus, ” says Goh, adding that they kept in touch on Skype, sms and even using a long-distance phone card for phone calls.

“I’m fortunate that from the time we were dating until now, after two kids, I’ve never had to buy her a bouquet of flowers on Valentines Day because she doesn’t like flowers, ” says Goh, as Lim chips in: “I’m low-maintenance that way.” And the couple laugh.

Valentine's by the books

The couple will most likely not be spending Valentine's Day out having a fancy dinner, not because of the pandemic but because it will be spent on their coursework which is due a week after the Chinese New Year festivities.

“You may think that since it’s virtual classes, we can still keep an eye on our kids at home. But in reality, it’s not that easy. But the good thing is, we’ve very good family support, ” she says.

“On weekends, when we have to spend the whole day at online classes, we’ll send our kids to my parents’ place, ” says Goh.

The couple often have to wake up in the middle of the night or in the wee hours of the morning just to finish their coursework, which mostly gets done on weekdays, after the children go to bed.

“But we try to bear in mind that the one year (for their MBA) will pass by in the blink of an eye and we’ve already gone through one and a half months of our course which started in Jan 2021, ” says Lim.

“The pandemic is also a motivator – why not get a qualification while #stayathome. Imagine ending the year on a high with an MBA instead of idling while at home” she adds. 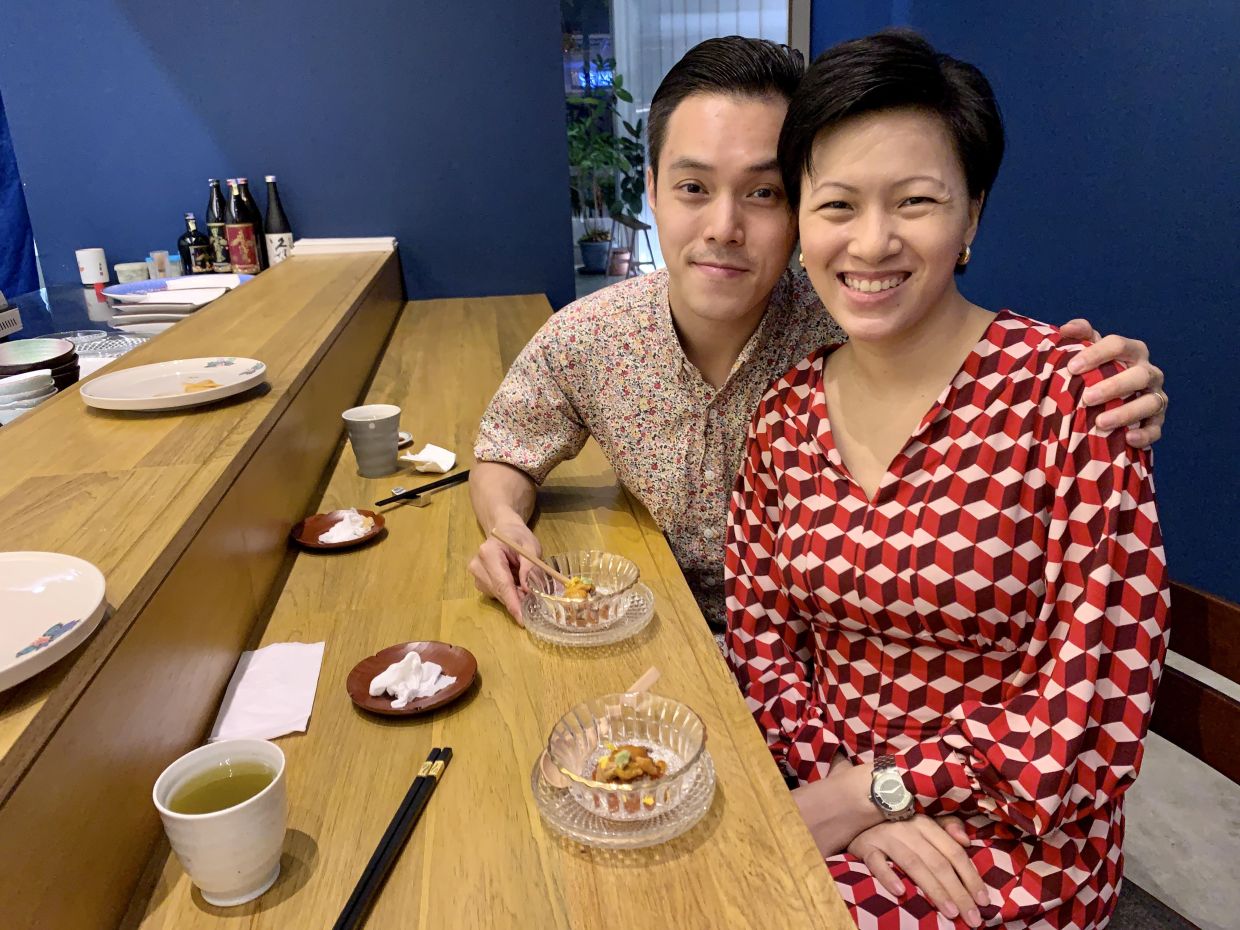 One thing that binds Goh and Lim together is their love for food. Photo: Calvin Goh

Keeping the romance alive can be challenging after the arrival of the children, the couple admit.

“The game changer is really the children because everything just revolves around them, including the happiness and frustration that they give us.

“But during weekends, when we have class the whole day (and the children are with Calvin’s parents), we’ll make things a bit special by ordering some nice food online, ” says Lim.

“It’s like having a date with food at home instead of going out, ” she says.

“Or we’d splurge to buy some extra special ingredients to recreate a dining out experience at home, ” she adds.

One of the memorable experiences they went through during the pandemic was the birth of their second child in April 2020.

“Having the second child is always easier since we already know what to expect, but there were some uncertainties because of the pandemic. We were worried about going to the hospital so often but the SOPs at the private hospital were quite tight we felt safe. We also had to take a swab test before being admitted, ” recalls Lim.

“Ironically, the pandemic benefitted us because there were fewer cars on the road and fewer people in the hospital, so it made the commute easier and there wasn’t a long queue at the hospital, ” adds Goh.

“Post delivery, usually the family comes to visit and there’s a merry atmosphere. But during the MCO, just the husband is allowed. But that gave me the opportunity to rest, ” says Lim.

Valentine's Day: Celebrating their love for each other in a foreign land