Rumah Buku Taman Aman operates on the concept of “read and share”. Photo: The Star/Ming Teoh

If you go for a walk at local park Taman Aman in Petaling Jaya, you might have come across a small wooden structure shaped like a traditional house on stilts. It contains books and these are free for borrowing.

Rumah Buku (House of Books) Taman Aman, as it’s called, was launched early this year by the Community Library of Petaling Jaya, in partnership with the PJ City Council (MBPJ) and the Friends of Taman Aman (FOTA) club, to cultivate a strong reading habit among families and children in the area. It is operational from 7am to 7pm (but times may change during the pandemic).

There are books for both children and adults – from fiction to non-fiction. A recent visit to Rumah Buku revealed a range of books, including general knowledge books, as well as fiction like thrillers, classics and other types of novels. Most of the books are in English and Bahasa Malaysia.

"People can read them at the park or take them home to read. They can return the books or even keep them if they wish. They can even barter trade too,” says FOTA secretary Siti Mahfudz.

"There are no rules or regulations. We just want to cultivate the good habit of reading," she says. 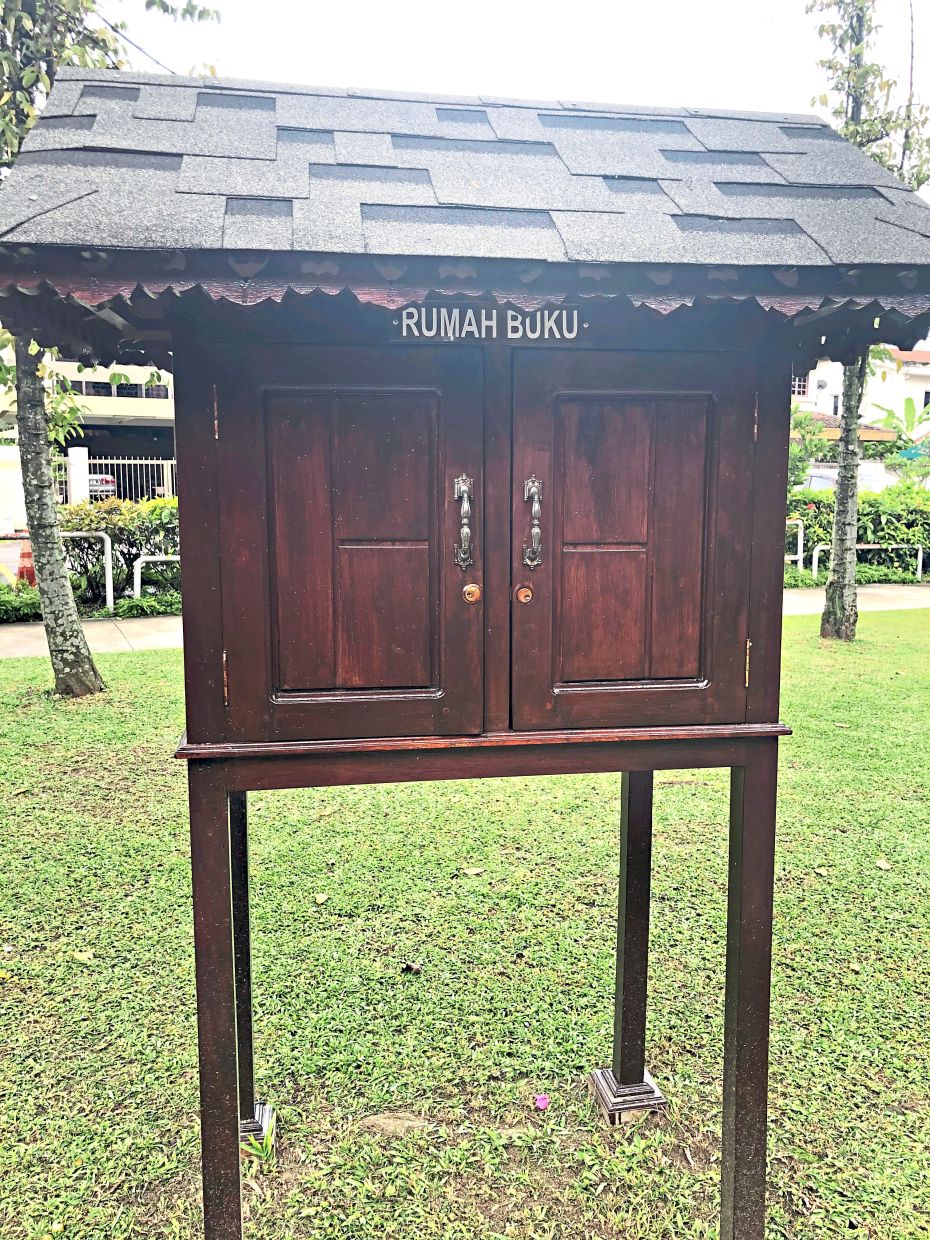 Rumah Buku Taman Aman is a free community service and operates on the basis of trust as there is no person manning the facility. Photo: The Star/Ming TeohSiti, who unlocks Rumah Buku in the mornings and locks it up again at night, reveals that the turnover of books is high.

“I’m so happy that the turnover of books is overwhelming! To see someone sitting at the park reading one of the books is such a joy for me," she enthuses.

Users can record books they’ve borrowed or taken (a note book and pen is provided) if they wish. Of course, nobody is there to make sure they do, so it’s based on trust.

Many people also donate books, but they will usually be screened through first before being added to Rumah Buku. Originally, the books were provided by MBPJ but after that, the books and also magazines from members of the public just kept pouring in, Siti reveals.

Especially popular are recipe and children’s books which are “taken like goreng pisang”.

“The aim of Rumah Buku is to encourage more people to read, and not just online, but also printed books,” Siti says.

“It’s a trial project by MBPJ, and so far, it’s well-received. They might give us a bigger and better ‘pondok’ later ... I hope,” she adds.

One of the residents in the area who wishes to be known only as Rozita says: “I walked and exercised here (before the MCO) and resumed during the recovery MCO. I think it’s wonderful that the habit of reading is still being encouraged during the pandemic.”

Another resident, Lee says that he sometimes borrows books from Rumah Buku for his children: “Instead of buying new books, this is more economical especially during uncertain times like this because we can just borrow and return (the books) later or even keep them.”

“It’s great that nobody has vandalised it, which means Malaysians are more civic-minded now,” says park goer Ramy.

Are they concerned about using the Rumah Buku service during the pandemic?

“Well, yes, of course we’re worried about touching the books and everything. But life goes on. We can’t stop living just because of the pandemic. We just have to be wise,” Lee says. He adds that he usually sprays the books with disinfectant before bringing them home.

“I’m glad there is a bottle of hand sanitiser and a notice posted asking people to sanitise their hands before and after touching the books! It’s a great initiative to keep this service going during the recovery MCO,” Rozita says.

The service is eco-friendly because people can also donate books that they’ve read here, which means a longer lifespan for the books, she adds.

Who can children call when in distress?