(From left) Thong and Tan with a friend playing Pokemon Go before the MCO. Photo: Tan Jooi Long

Retiree Tan Jooi Long spends most weekdays at the mall but he isn’t there to shop. He has more serious business to get done: collecting Pokemon with a group of fellow gamers he met in the course of playing the augmented reality game, Pokemon Go.

The tech-savvy grandfather reveals that he taught himself all about the game by reading about it online.

“I read about the game before its launch, and started playing it when it was launched in Malaysia. It’s the first and only app-based game that I play, ” he says.

“At first, I was intrigued that there was going to be a mobile game based on augmented reality. After I tried it, I was hooked because the variety in the gaming model is very compelling and stimulating!” Tan enthuses.

“Before the MCO, I would play Pokemon Go with a bunch of trainers (players in the game are called trainers) that I befriended. Some or all of us would walk and play together, almost every day at the 1Utama Shopping Centre in PJ, ” Tan says. 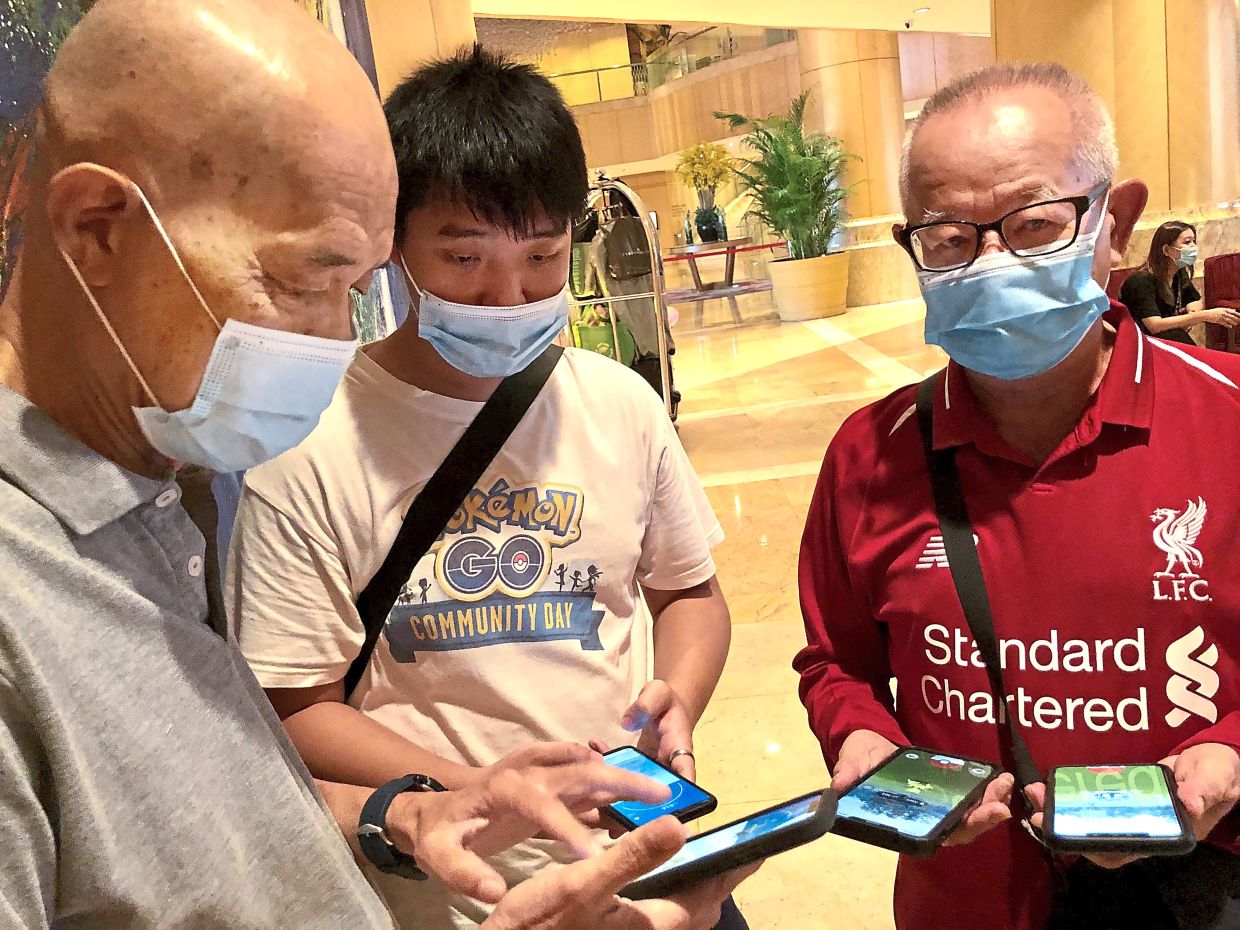 Augmented reality gaming is something that knows no age boundaries.Tan and Thong go raiding together with a young friend in Pokemon Go. Photo: The Star/Ming Teoh

Steven Thong, also 72, is another retiree who started playing the game around the same time as Tan.

“I enjoy the game, it’s fun and it feels so good because it keeps me on the go, ” Thong says, revealing that he would hang out at the mall on weekdays just to play the game with his friends and sometimes, even by himself.

Thong says that he got to know more about the game from Tan when they first met at the shopping mall.

“It’s a social game and trainers make friends with people whom they meet playing the game. Nowadays, most of the friends I meet most frequently are those I’ve made from playing the game, ” Tan says.

“We usually hang out at the Old Wing of the mall and Bandar Utama Central Park where there is a Pokemon Go Gym (for raids) and also several pokestops (to spin for items such as revives, potions and berries), ” Thong adds. 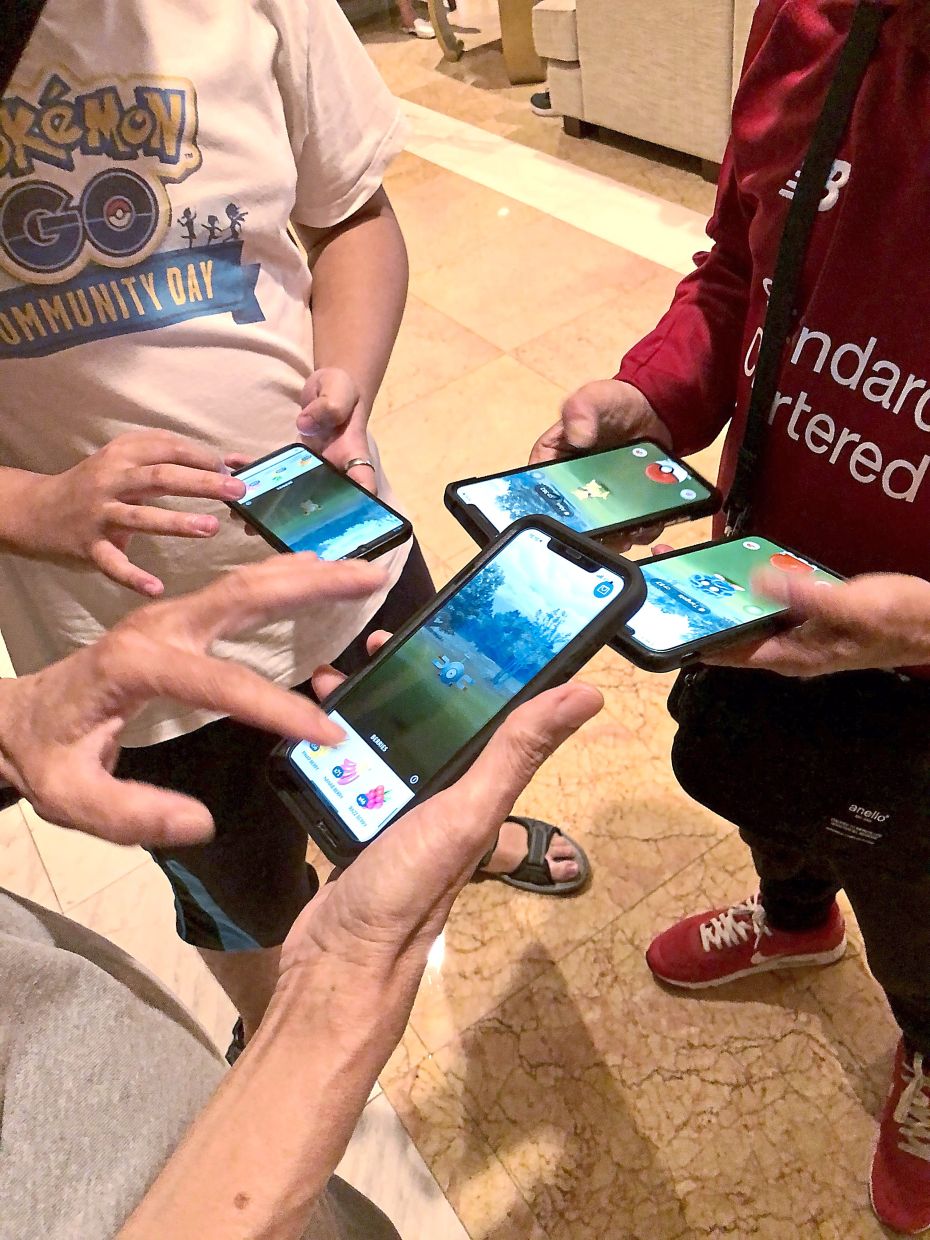 Tan and Thong are back at the shopping mall to play Pokemon Go. Photo: The Star/Ming TeohIt isn’t actually uncommon for seniors to embrace digital game play. A research paper by Canadian technology and ageing network Age-Well found that many senior citizens are active technology users and increasingly play digital games.

In their study, Playful Aging: Digital Games for Older Adults, Age-Well found that the proportion of Canadian older adults who play digital games increased from 9% in 1990 to 34% in 2014. In the United States, 21% of gamers are aged 50 or older. Of nearly 3,000 older Americans surveyed in 2016,38% played digital games at least once per month, about 75% played at least weekly, and 40% played daily.

It isn’t surprising as games are engaging, entertaining ways for people to spend leisure time which retirees tend to have more of.

Games draw people into fictitious, puzzling, fantasy, and educational situations where they must meet challenges, compete, and win rewards.

In Florida in the US, a nursing home and rehab centre is using the AR game to keep seniors physically and mentally active. In Spain, social workers are prescribing the game to seniors to fight loneliness.

Besides being fun and enabling them to make new friends, both Tan and Thong say that playing the game has been beneficial to their health too.

“The game requires the trainers to walk. As a result, I began to monitor how far I walked every day. In fact, I try to chalk up at least 10,000 steps a day, ” says Tan.

Thong agrees adding that if not for the game, he probably wouldn’t be as active.

“All that walking is good exercise for me. If not, I might be more sedentary, ” admits Thong.

“The game definitely requires a lot of walking (to collect candy, spin pokestops, raid at Pokemon Gyms, and hatch Pokemon from eggs), and the more you walk, the better for your game. So, you can imagine how painful it was for us when the MCO was enforced in mid-March since we couldn’t go out nor walk any where, ” laments Tan.

Be active but remain safe

Consultant geriatrician at University Malaya Medical Centre Dr Tan Maw Pin says that it’s important for seniors, defined as those over 60 years old, to stay active. But there are more than just the conventional ways of doing so, she points out.

“Indoors or out, there are many ways seniors can make sure they remain active, ” says Dr Tan. Being up and about and even exercising doesn’t just have to be outdoors or in large groups. It can even be just walking.

Whichever way a senior chooses to be active, the important thing is to stay active, and in this time of the Covid-19, to do it safely, she advises.

“If you don’t use it, you lose it! The minute you stop using your muscles or your brain cells, they will start to waste away. We’re all familiar with exercise such as brisk walking, running and cycling making our hearts pump more effectively. It’s the same with the rest of the body, ” she says.

“Furthermore, the older a person gets, the more likely they are to have medical problems such as arthritis, high cholesterol, heart disease or diabetes. These conditions reveal a low level of inflammation.

And, the more of such problems that a person has, the higher that level of inflammation becomes. It’s this inflammation that accelerates muscle and nerve cell loss, which explains why older people lose it faster if they don’t use it, ” she adds. 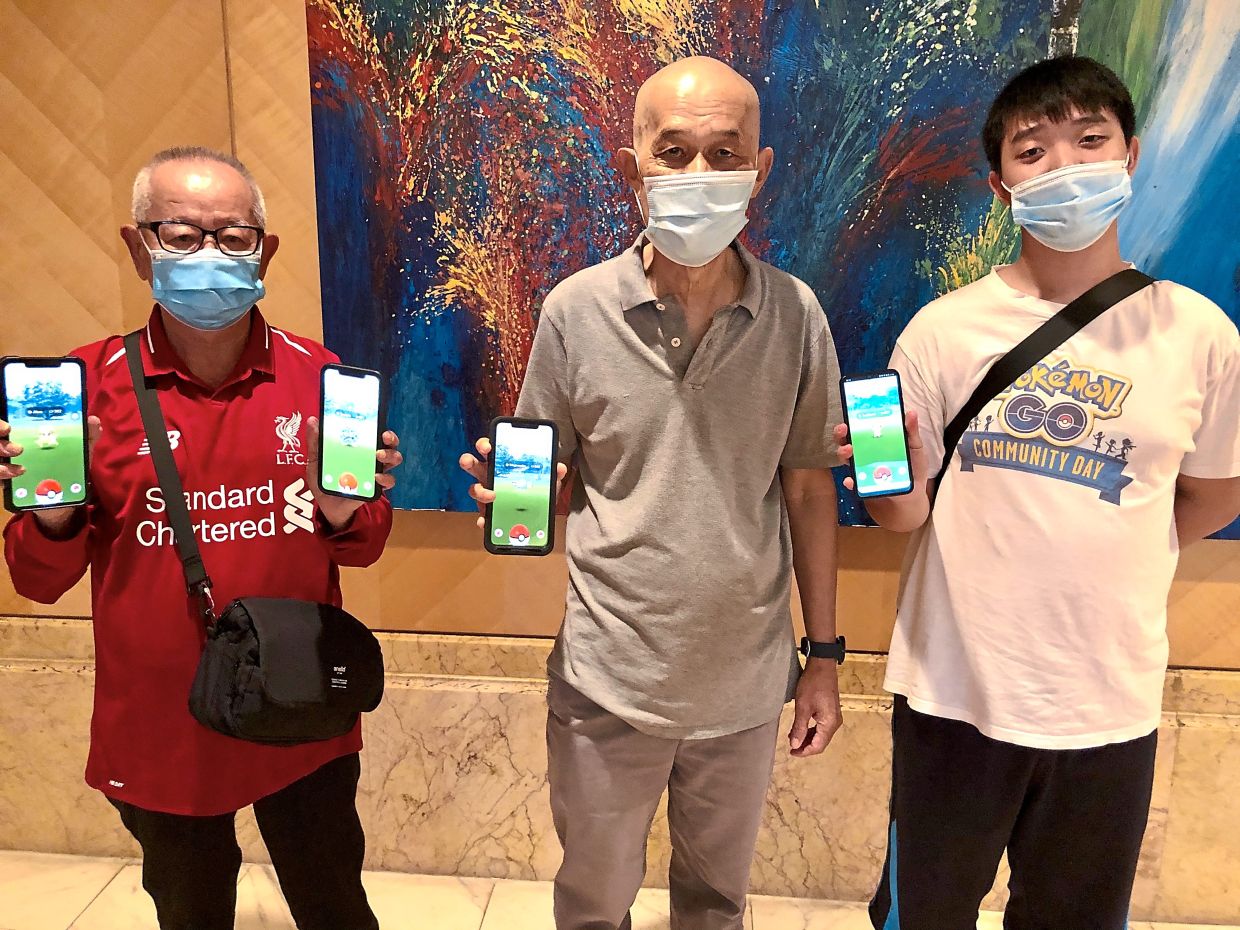 Thong, Tan and a young friend showing off their win after a Pokemon Go raid. They became friends because of Pokemon Go, Tan reveals. Photo: The Star/Ming Teoh

Malaysia is currently in the recovery movement control order (MCO) until end of the year.

Although restrictions have been relaxed somewhat, Covid-19 is far from over.

During this time, seniors still have to take extra precautions to stay safe while going about their activities, cautions Dr Tan.

“The only way to ensure one does not get Covid-19 is to avoid going out altogether even during the recovery MCO. But that is impossible and definitely not recommended. People need to go out to buy food, attend to banking needs, see their doctor or buy medication from the pharmacy, or even to exercise, ” says Dr Tan.

“Going out helps us to keep ourselves mentally, physically, socially and spiritually alive, ” she says, adding that while it’s up to each individual, senior or not, to decide for themselves whether to go out, and whether to participate in activities, they need to take the necessary precautions such as social distancing, masking and avoiding crowds to protect themselves.

“Generally, as far as Covid-19 is concerned, you need somewhere with good ventilation – so outdoors is the best. But, if you have to be indoors – because of air-conditioning, or facilities like restaurants or toilets – then you have to do it wisely, ” she advises. 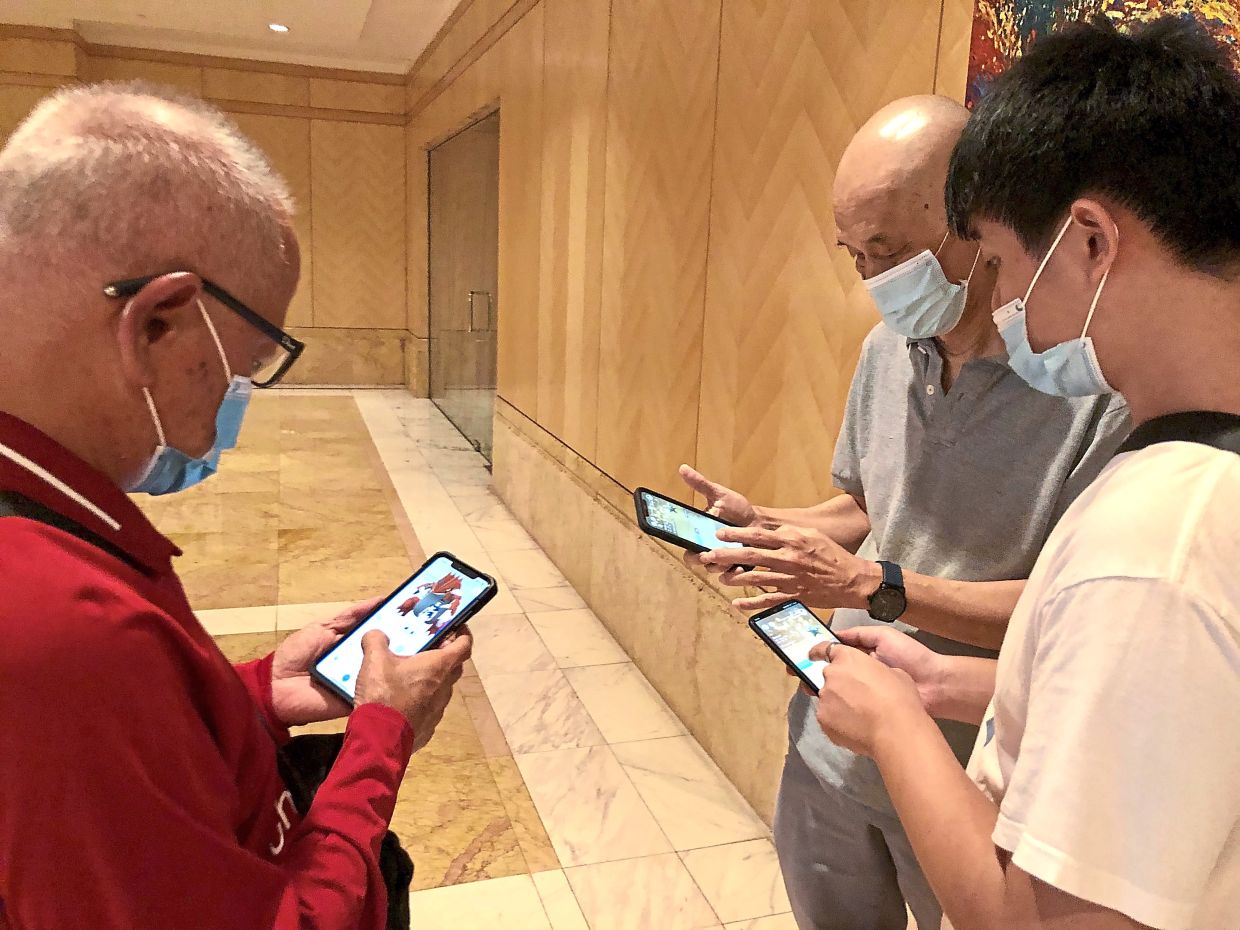 (From left) Thong and Tan with a young friend, all masked-up, playing Pokemon Go during the extended recovery MCO. Photo: The Star/Ming Teoh

Though the two seniors are out and about, they are careful in keeping their masks on at all times.

There are about 15 to 20 gamers – young and old, both male and female – in the group and they like to hang out at the mall (before the MCO), because “friends bring more friends”.

Although not everyone is always there at the same time, especially now when everyone is practising social distancing, they stay connected on WhatsApp and other social media.

They’ve also added one another as Pokemon Go friends in the games app itself since there are many opportunities for interaction within the game: gamers can raid together, battle each other, send gifts to one another, or even trade Pokemon with each other.

“It’s very exciting to collect all the Pokemon, especially the Shinies (special edition Pokemon which are a different colour from the regular ones) and Regionals (pokemon that are available only in certain regions of the world) to fill up the Pokedex (listings of all the Pokemon caught),” says Thong.

Some (especially the Regionals) can only be obtained by trading with other Pokemon Go friends, he adds.

Tan says that initially, family gatherings would double up as game time with his children and grandchildren. But after four years since the game was first introduced, only Tan remains as passionate as ever about it.

“As time went on, my daughter, son, grandson and granddaughters gave up playing the game because of busyness with family life, kids and work/school.

“But, I’ve adopted their accounts, so it hasn’t been a total loss,” he says, with a laugh.

“Although my family members aren’t gamers, they’re very supportive and have always encouraged me to play the game. They even give me a lift to the shopping mall!” adds Thong.

Although many other gamers have their “seasons” in the game – when they are busy, their activities taper off – that’s not the case with Tan.

“I’ve not stopped playing Pokemon Go since Day One. I even played every day when I was on my numerous trips in Indonesia and Timor-Leste (before the MCO),” he reveals.

Although not all of their “Pokemon Go gang” have returned to the shopping mall when the MCO restrictions were relaxed, the duo are relieved that they can now return to their playing field, with the necessary social distancing and other requirements of the new normal during the recovery MCO.

Besides Pokemon Go, Tan reveals that he is an avid Tweeter.

“I’ve learnt a lot of things from Twitter, and I also post five times daily on the App,” he enthuses.

Thong is also into photography, and reveals that he enjoys taking photos of models as he whips out his smartphone to show his collection.

Seniors on the go 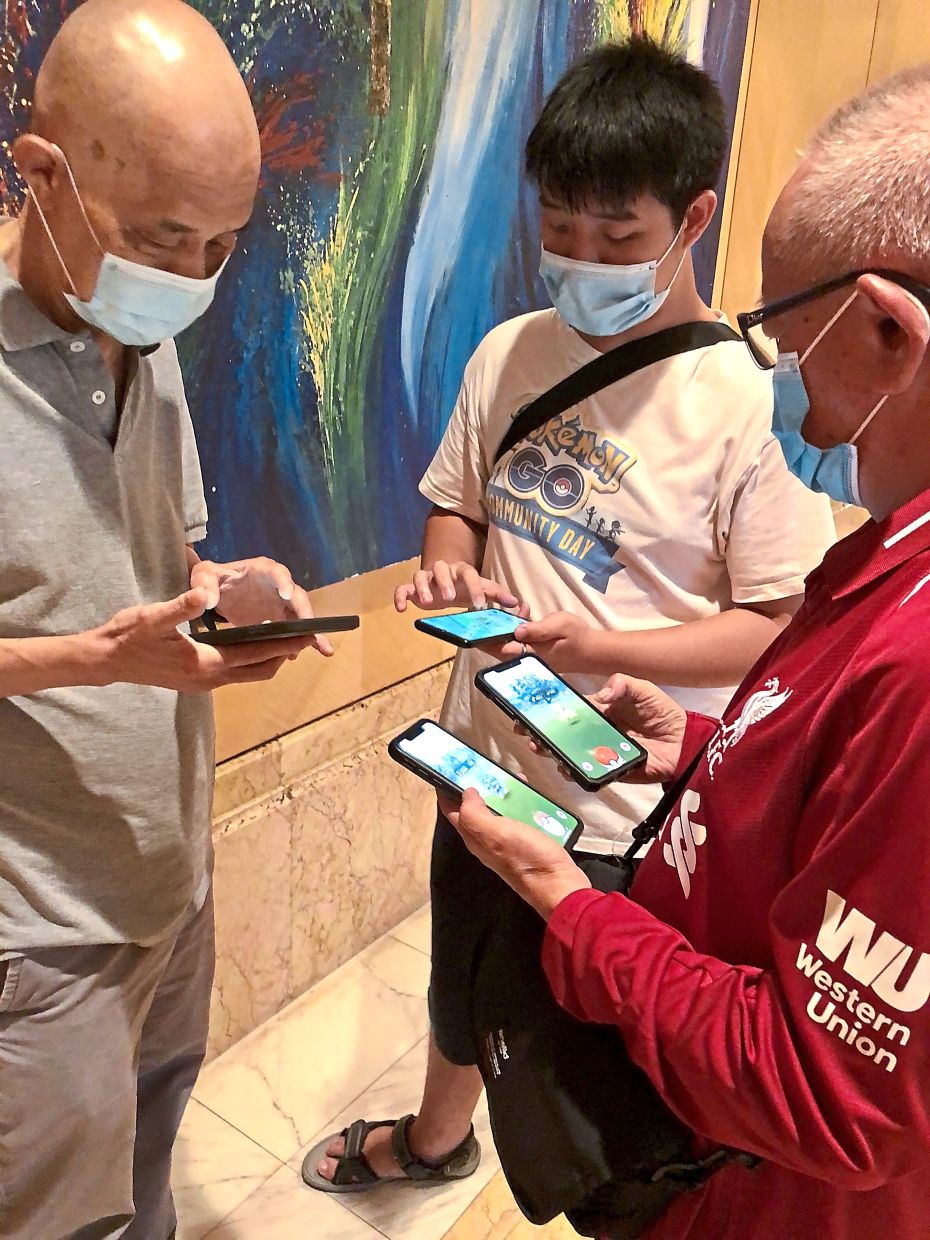 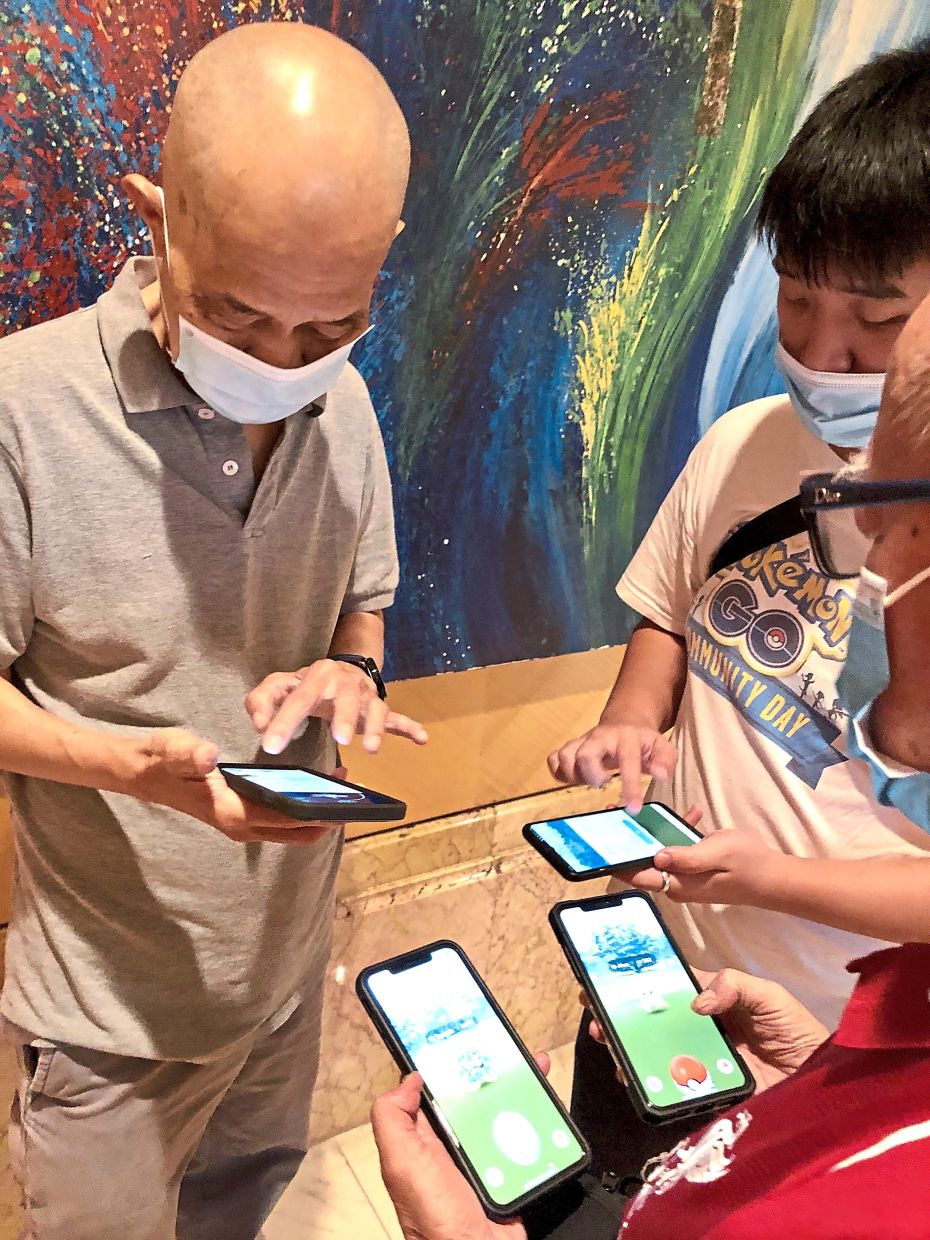 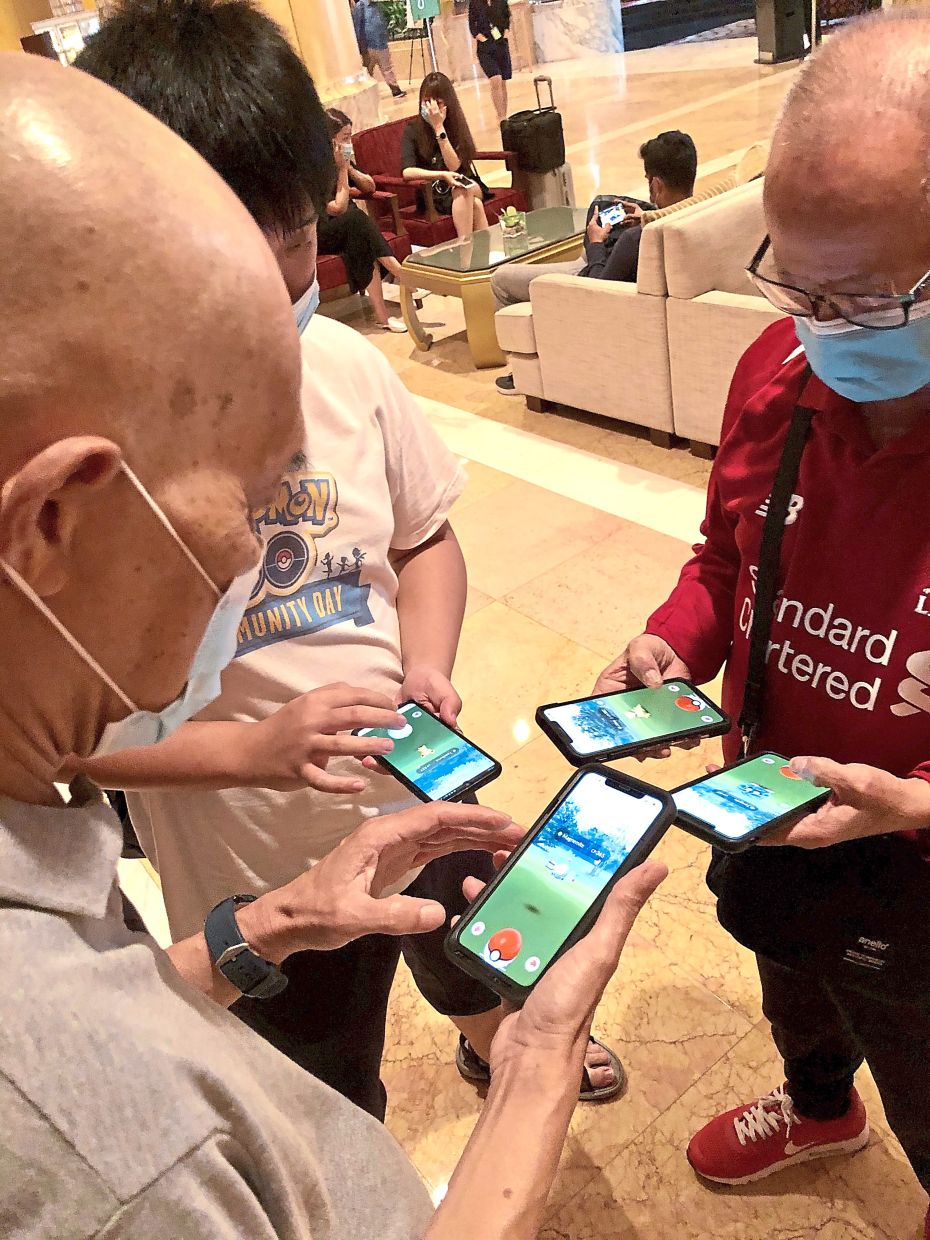 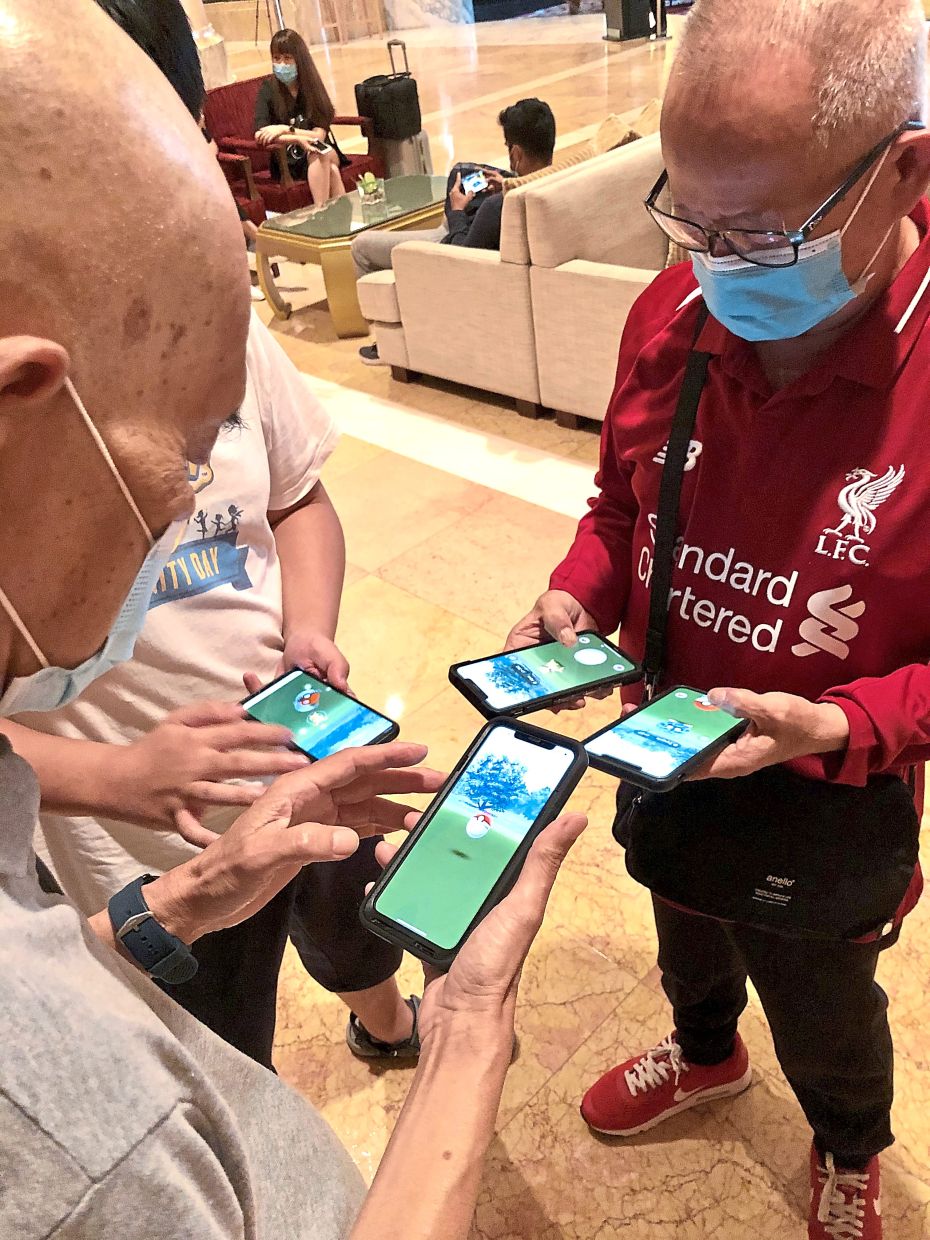 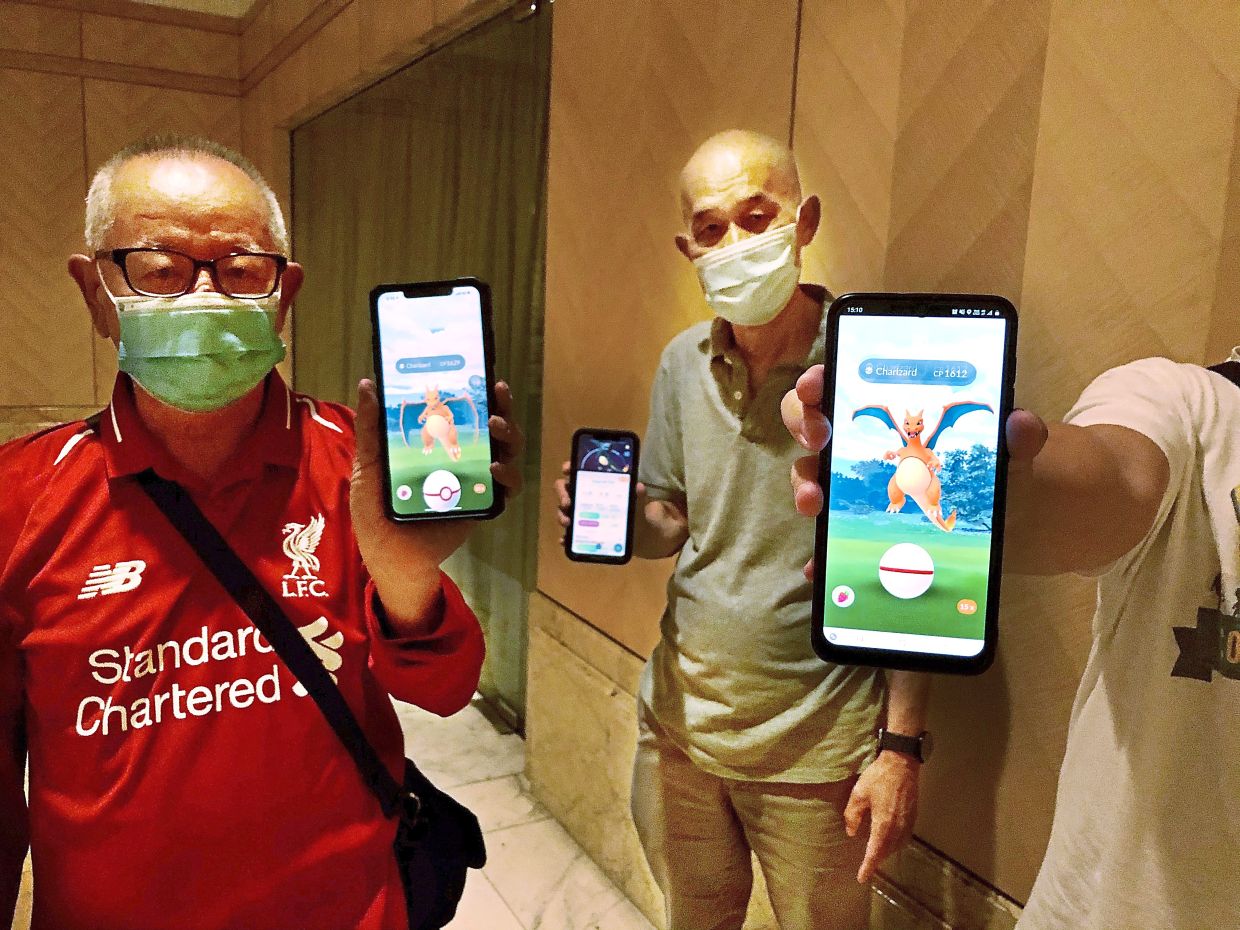 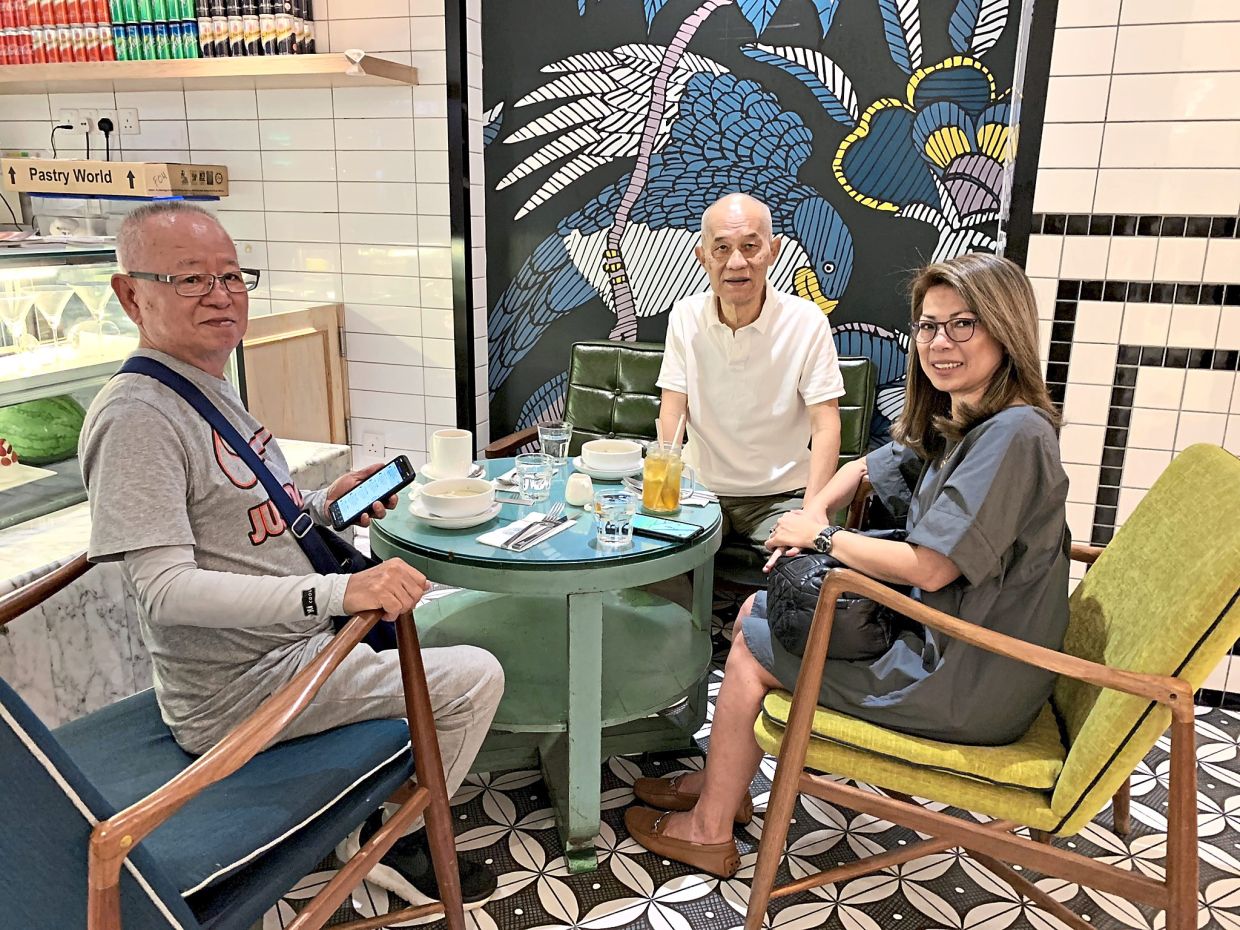 (From left) Thong and Tan with a young friend, all masked-up, playing Pokemon Go during the extended recovery MCO. Photo: The Star/Ming Teoh

Augmented reality gaming is something that knows no age boundaries.Tan and Thong go raiding together with a young friend in Pokemon Go. Photo: The Star/Ming Teoh

Tan and Thong on a Pokemon Go raid with a young friend. Photo: The Star/Ming Teoh

Tan and Thong on a Pokemon Go raid with a young friend. Photo: The Star/Ming Teoh

Playing Pokemon Go has enabled me to make friends of all ages, says Tong (right). Photo: The Star/Ming Teoh

Playing Pokemon Go has enabled me to make friends of all ages, says Thong (right). Photo: The Star/Ming Teoh

Thong, Tan and a young friend showing off their win after a Pokemon Go raid. They became friends because of Pokemon Go, Tan reveals. Photo: The Star/Ming Teoh

Tan and Thong are back at the shopping mall to play Pokemon Go. Photo: The Star/Ming Teoh

After winning the raid, it's time to catch the Pokemon, says Thong. Photo: The Star/Ming Teoh

(From left) Thong and Tan with a friend playing Pokemon Go before the MCO. Photo: Tan Jooi Long

Female triathlete does Everesting on her bicycle in Malaysia