For Sarika Malhotra, owner of Phases New Energy Spa and Beauty Studio in Petaling Jaya, running a business is not just about earning an income for survival, it also involves giving back to society.

The 50-year-old single mother started her business 20 years ago to support herself and her then two-year-old son when she lost her job at a health and beauty club during the recession in 2000.

Since then, Malhotra’s business has expanded from one room to occupy two floors at the Spastic Children’s Association of Selangor & Federal Territory Building (Spastic Centre).

“It was the economic crash at that time and I couldn’t afford a fancy, high-class place, ” she reveals.

“The Spastic Centre was also trying to generate funds to support the children by renting out rooms in their building. I thought it would be a good way to start my business and at the same time, give back to society, ” she says.

Phases offers a full range of spa and beauty services, from facials and hair treatment, to massages and slimming, for the middle-lower income groups. Clients are mainly women, and men are only allowed (with their wife) for couples’ spa treatments.

Malhotra is relieved that spas and wellness centres are allowed to reopen during the recovery MCO. New SOPs for the new normal include wearing of PPE for staff at Phases New Energy Spa and Beauty Studio. Photo: The Star/Art Chen

“Health and wellness is very important, even more so during the MCO when people may feel stressed and anxious. A good spa experience helps them cope better mentally and physically. Some spa treatments also provide detoxification and are good for boosting the immune system, ” she says.

“Moreover, even before the pandemic, we already have high cleanliness and hygiene procedures in place. So, it wasn’t difficult to adjust to the new normal after reopening, ” she adds. 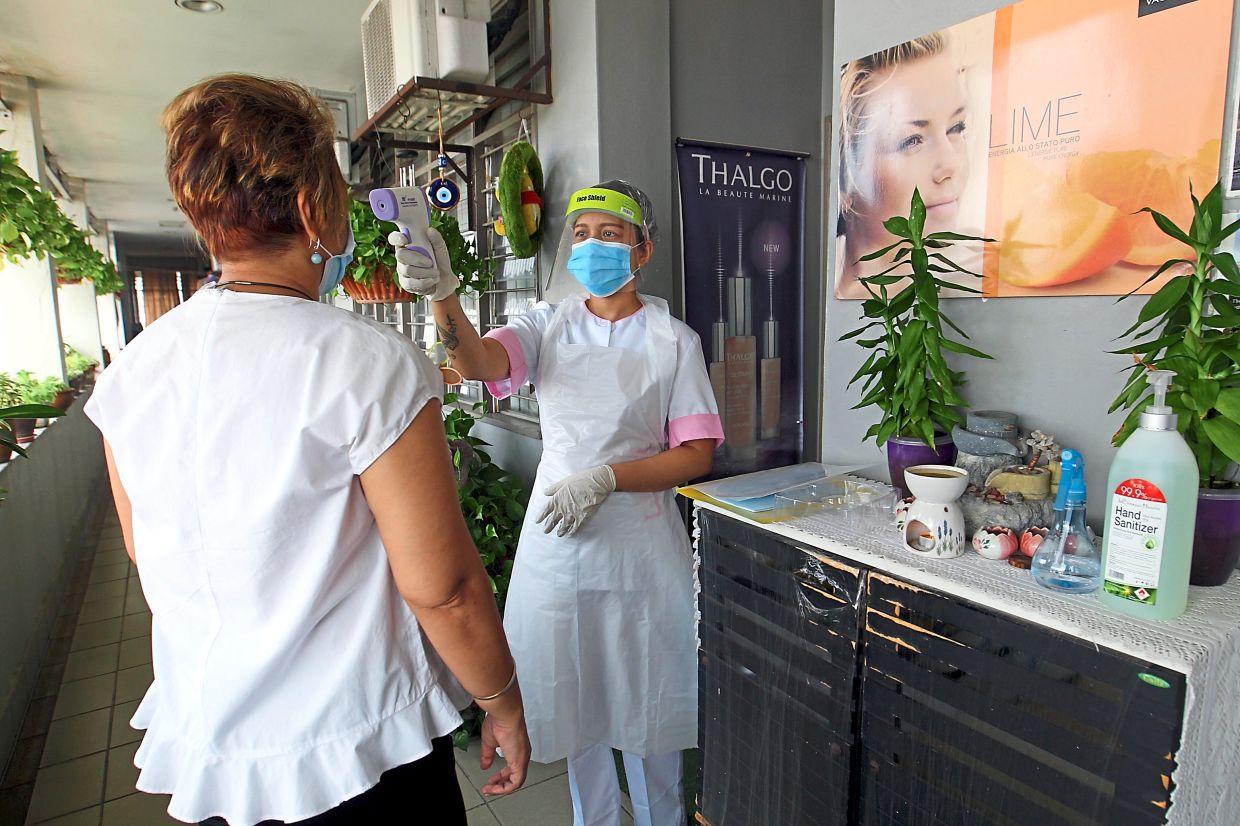 SOP during the new normal includes temperature scan, spraying of disinfectant and hand sanitising for clients. Photo: The Star/Art Chen

According to Malhotra, other than signing in and recording clients’ names, scanning temperatures, and spraying (disinfecting) clients before they enter the centre under the new SOP, most spas and wellness centres are already practising sanitising of hands, equipment and beddings (of treatment beds).

“Before the MCO, we already sanitise the place after each client. We also use uniforms and disposable masks. Now, we have added the PPE (personal protective gear)."

She admits that the pandemic and MCO did affect business because they haven’t been able to run at full capacity like previously. 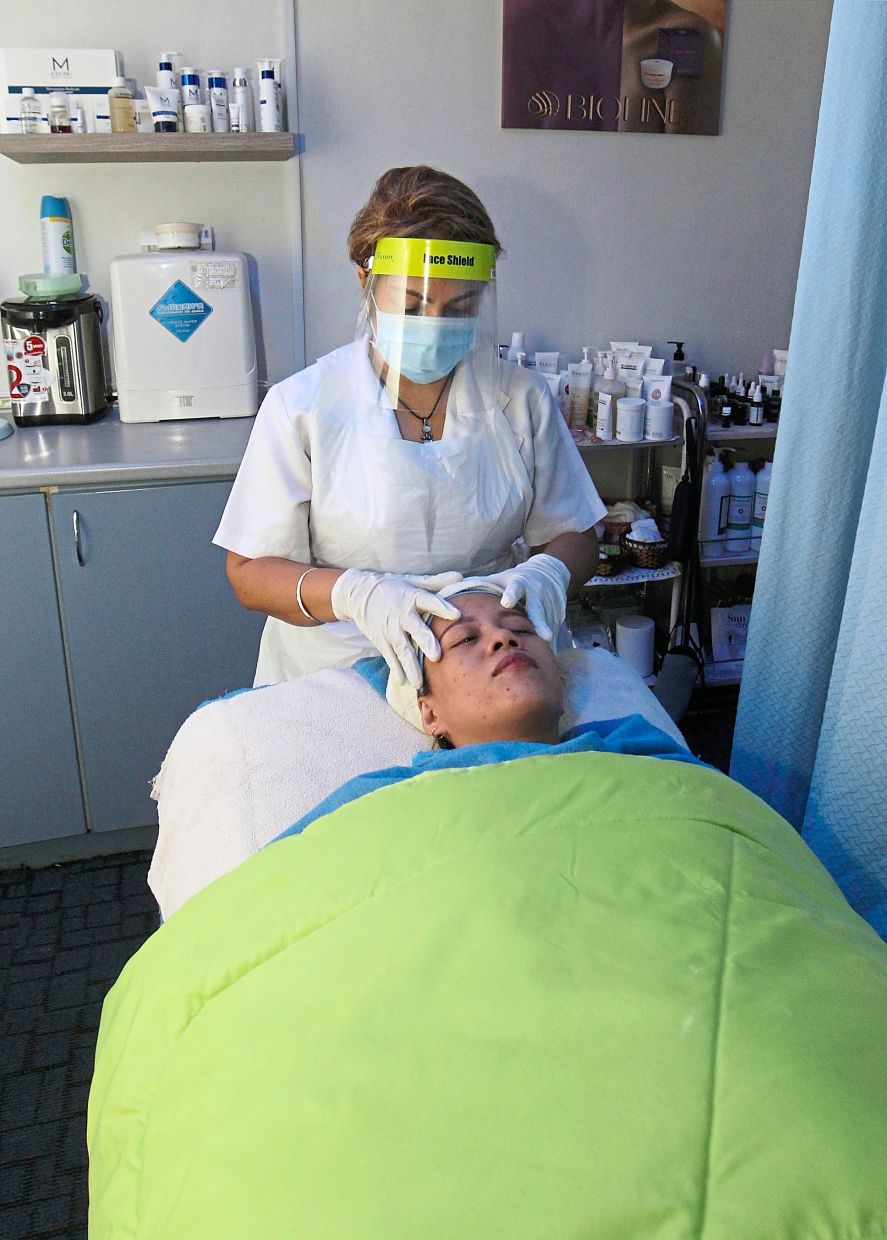 Facials conducted with new SOP in place during the new normal. Photo: The Star/Art Chen“We used to take up to eight bookings per day pre-MCO, but under the new normal, we’re only allowed to take one customer at any one time, so the maximum per day is three (37% capacity).

There was also a drop in business since they were closed for almost four months during the MCO. But online sales (of spa and facial products) has increased since clients have had to do their own facials and body treatments at home during this time, Malhotra reveals.

“For services (treatments), most of the clients are on packages and these have already been paid for, so we don’t feel the brunt of it yet. But if there is no turnover or new sales, we’ll feel it later because we still have to pay the rental even for the months when the centre was closed, as well as other bills, ” she admits.

Malhotra believes that women entrepreneurs have an important role to play in society.

“Women are usually more empathetic and compassionate, which is important in the health and wellness industry. Women are capable but they just haven’t been given the right opportunities and platform, ” she says.

Malhotra reveals that she also does life-coaching and started a platform called Pendulums of the Universe for this purpose eight years ago. She has 40 students, mostly single mothers like herself, and hopes her experiences will help and inspire them.

“I saw the need for a platform where single mothers can get the support they need. For example, there’s a single mother who bakes cakes to support herself and her children, so we all help by buying from her, ” she says.

“I learnt the concept of ‘givers gain’ and ‘you give and you receive’ from other business networking groups that I’ve been in. In this way, we’re all able to get through tough times together, ” she concludes.

Can you spark joy in your life by tidying?

Women lose up to a million dollars because they're not paid the same for equal work
With no where to go, Ukraine's elderly bikers defy cycle of violence
Starchild: If they had a million ringgit, Malaysian kids say they'd donate to charity
Living in grief since Beirut explosion that killed their young daughter
In Haiti, children who fled gang wars have to face uncertain futures.
What Malaysia and Malaysians must do to check human trafficking
Conjoined twins separated with help of virtual reality in Brazil
Malaysian twins teach themselves to play the dhol, breaking stereotypes along the way
Bill Russell, NBA's first Black superstar and civil rights activist, dies at 88
Starchild: Malaysian kids have a passion for kite flying